Exhibit features Catholics of color sharing their experiences of racism

ALLOUEZ — At first glance, the 13 portraits — strategically located along the back wall of St. Matthew Church — simply appeared to be part of a photo exhibit.

However, as guests viewing the colorful photos Nov. 14 moved closer to the images, which were stationed next to a board describing each person, they learned that these faces of color, who worship with other Catholics in the Diocese of Green Bay, face racism. 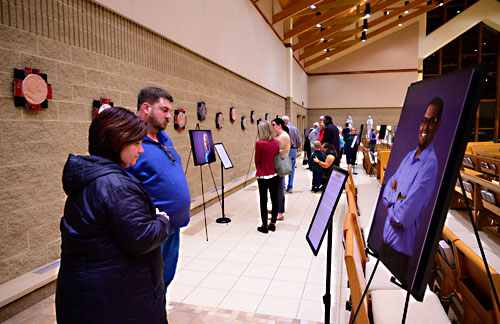 Jackie and Jon Goral view one of 13 portraits on exhibit at St. Matthew Church in Allouez on Nov. 14. The photo exhibit, sponsored by the Diocese of Green Bay, was inspired by the U.S. bishops’ 2018 pastoral letter against racism. (Sam Lucero | The Compass)

The exhibit, titled “Open Wide Our Hearts,” is a traveling display that was inspired by a pastoral letter against racism written in November 2018 by the U.S. Conference of Catholic Bishops.

Sponsored by the Diocese of Green Bay’s Office of Living Justice, the exhibit was created by Peter Weiss, who serves as Living Justice Advocate for Catholic Charities. Weiss told The Compass that the exhibit was modeled after one he saw in Oshkosh in 2018 featuring people of color. It also included written stories by those photographed, sharing their experiences with prejudice and discrimination.

Publication of the U.S. bishops’ pastoral letter, “Open Wide Our Hearts: The Enduring Call to Love – A Pastoral Letter Against Racism,” presented a perfect opportunity to create a photo exhibit featuring Catholics in the Diocese of Green Bay, said Weiss.

The exhibit includes Catholics who are Native American, Indian, Latino, Laotian, Filipino, Black and Micronesian. It also includes an international priest from Uganda serving in the diocese, Fr. Celestine Byekwaso, and a permanent deacon, Joe Vang.

Weiss said that getting the project off the ground came with some anxiety, not knowing whether people would share their stories.

“Making those phone calls was a bit nerve-racking. They didn’t know me and I didn’t know them,” he said. “There’s a certain level of risk putting yourself out there,” sharing personal stories and not knowing how they will be received.

One project participant told Weiss that she had never discussed her story of racism before. “It was something that had happened a long time ago, but it clearly, very clearly, stuck with her,” he said. “That was one of things for me, personally, that was so powerful being a part of it. I feel blessed and honored and privileged to have gotten to sit and just listen to those stories. The fact that they were willing to share them and to be vulnerable has been great.”

Among the 13 people photographed and profiled in the exhibit was Eddie Boyce. A member of St. Matthew Parish since 2013, Boyce attended the photo exhibit.

Boyce told The Compass that he was initially apprehensive about participating in the project. “But I appreciated (Weiss’s) vision of what he saw, as far as touching on a subject that is not normally talked about,” he said.

Boyce, who is Black and married to a Caucasian, said he told his wife that he did not want people to “walk up to me and say, ‘Hey, I feel so bad.’ It’s not about that. At this point, I want the next individual, who might not be as strong-willed as I was, to know that when they walk in (to church) that this is a place where you can be yourself and that you can be accepted.”

In his written narrative that accompanies his photo, Boyce said that he has experienced racial tension while attending Mass. “The racism I’ve experienced in the parish is never direct,” he said. “But I’ve had people walk past, even when I’m with my wife and kids, and roll their eyes.”

Boyce told The Compass that he has seen a change in climate during his time at St. Matthew, thanks in part to the pastor, Fr. Bob Kabat. 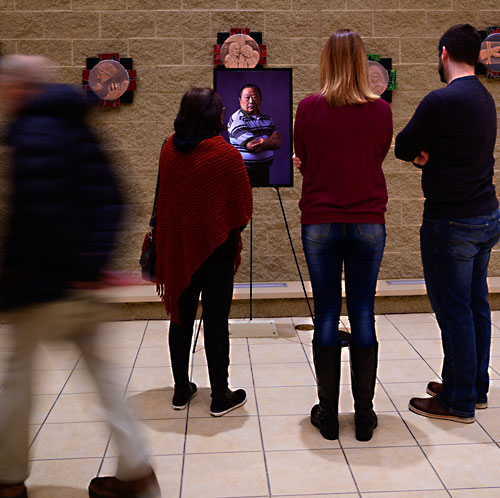 Guests view a portrait of Deacon Joe Vang that is part of a photo exhibit at St. Matthew Church in Allouez Nov. 14. Deacon Vang, a member of Sacred Heart Parish in Appleton, is one of 13 Catholics from the Diocese of Green Bay who are featured in a traveling photo exhibit titled “Open Wide Our Hearts.” (Sam Lucero | The Compass)

“I have to give Fr. Bob a great deal of credit for helping everybody be more conscious that the doors are open to everybody,” said Boyce. “I think that’s what your leader is supposed to do, to touch on those things and have everybody grow – and even myself.”

He added that churches are where the doors to acceptance should be expected.

“This is a place where, when everybody walks into a church, they want to feel like they are not being judged,” said Boyce. “This is the one place, out of all places that you may go, that you have different ethnicities. The common goal for anybody is just to grow closer to God.”

Samantha Davis, owner of Daveau Images of Green Bay, captured the 13 portraits for the exhibit. She said the project hit close to home for her and she was honored to be part of it. “I was drawn to it,” she said. “I am married into a biracial family, so to me I was like, ‘I’m on board.’”

Davis said the project was “a lot more eye-opening than what I expected it to be.”

“My husband and I are very open-minded and I don’t look at people based on skin color or anything,” she said. “I’m very pleased (with the project) and I think they actually turned out better than I was expecting. They have a lot of impact.”

“It was very interesting,” she told The Compass. “It’s good for us to see how other people feel about their cultures and racism. There were a couple where they felt like they did not fit in or that they were not welcomed. That kind of makes me feel sad because that’s not what we are called to be.”

Weiss said the project’s goal is for people to have conversations about how they treat others and what they can do to make people feel welcome.

“My hope, first, is that (the exhibit) would travel to parishes and schools around the diocese. What we’ve said all along is that we hope it would start a conversation about issues of race and diversity and inclusion within our Catholic parishes and schools,” he said, “and, taking it a further step, I hope it leads to action.”

The traveling photo exhibit is available to parishes and schools, said Weiss. For more information or to request to host the exhibit, contact Peter Weiss at (920) 272-8321 or [email protected] More information can be found at gbdioc.org/openwideourhearts.