Bishop Ricken will join parishioners for Mass on Nov. 30

These words from the song, “Sing Shout Clap,” by Billy Funk will be sung by children from St. Mary Parish in De Pere (Ledgeview) Nov. 30. The singing will be part of the parish’s 150th anniversary celebration Mass and the song, chosen by Barbara Whitcomb, director of music and worship, seems especially appropriate.

Whitcomb, a lifelong member, said parish members wanted to have their children and grandchildren be part of the anniversary celebration. So schoolchildren, as well as faith formation and homeschool students in grades three to eight have been invited. The song, which Whitcomb calls “energetic and thankful,” will be livestreamed during the 4:30 p.m. Mass at the church at 4805 Sportsman Drive.

Bishop David Ricken will preside. Concelebrating will be the pastor, Fr. Richard Getchel; associate pastor, Fr. Matthew Faucett; and invited guest priests. A parish potluck supper will follow. The day will also see the opening of a time capsule — whose burial date is unknown — and the premiere of a historical video.

“One hundred and fifty years is a milestone,” said Fr. Getchel, who has been at St. Mary since 2011. “Some parishes have never celebrated such an event and some never will. So, when something like this comes along, whether you can trace your roots and ancestry to day one or have been a parishioner only recently, we have been and are part of the great history of St. Mary Parish.”

The membership at St. Francis Xavier Parish, founded in 1864, had grown too large for its church by 1869. So Belgian, Dutch and German members split off, with support from St. Francis Xavier, and formed Immaculate Conception Parish. They also shared a pastor for a time: Fr. William Verboort.

Fr. Verboort had been an immigrant from Holland and proved an energetic pastor. Records show that he donated $500 of the $5,200 cost for the first church, built in 1870. (That building served the parish until 1998.) According to parish lore, Fr. Verboort also carved that church’s cornerstone.

Fr. Verboort and his parents later set out for the West Coast on the Oregon Trail. He died near Portland in 1876 at the age of 41.

The De Pere parish he left behind grew rapidly. When St. Mary was founded, there were 150 families; by 1878, that number had doubled.

Education has always been important to parish members. Their first school was completed by 1882. It had 248 students and was staffed by four Franciscan sisters. Several enlargements, renovations and additions followed. The present school was built in 1952. It houses Notre Dame Elementary on Huron Street, while Notre Dame Middle School is on South Wisconsin Street (near St. Francis Xavier). The two parishes’ schools were consolidated in 1971, one of the earliest Catholic school consolidations in the Green Bay Diocese.

The latest news for Notre Dame School came earlier this year, with the donation of $27 million by Jim and Miriam Mulva, of St. Mary, which is funding construction of a new three-story campus. This means the entire student body, from early childhood through grade eight, will be housed in the same 87,000-square-foot building.

“It’s an absolutely incredible gift,” said Terry Charnetski, who chairs the pastoral council at St. Mary. “It’s such a blessing. Both of the school buildings are much older buildings, and were going to be in need of substantial repairs. With this substantial gift, we can limp through the next school year and have a new school in 2020.”

This building project is just the latest for the active parish. In 1995, the parish began to explore the possibility of building a second church and moving from De Pere’s downtown. The 16.55 acres of farmland in the Town of Ledgeview that were eventually purchased belonged to Clayton and Gladys Bildings, active members of St. Mary Parish. Clayton, who died on Oct. 16, was interviewed for the anniversary video that will air on Nov. 30. 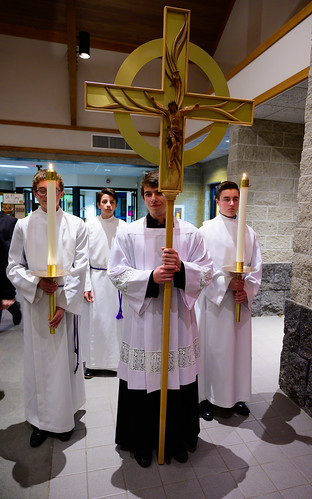 The farmland’s history was incorporated into the structure of the new church, which was dedicated by Bishop Robert Banks on March 29, 1998.

“I think that St. Mary is unique,” Fr. Getchel explained, “in that the new church literally was built on farmland and, with that in mind, the interior motif has the beams and trusses that would be found in a barn. It’s a bit unusual when first viewed, but beautiful when that fact is known.”

The old church on Superior Street — which had survived a Christmas season fire in 1942 — was demolished in 1999 and the school playground enlarged. Many of the elements of the old church travelled to the new church, including stained glass windows and a Christ Risen statue, carved by Latvian artist Igor Vasilijev in 1994.

In 2001, the parish added a bell tower and carport. One of the tower’s four bells is from the 1882 school. A second bell is from the old church. The two other bells were cast new in Holland.

“We have 1,288 families registered as members,” he said. “We have a lot of active ministries and I dare say many people in our parish don’t know everything we do. We have many ministries in the community to help and feed the homeless, help those with transitional housing, a prayer shawl ministry, and then, of course, the usual faith formation programs and nursing home/assisted living ministries. There are almost too many to mention.”

Terry Charnetski contributed to this story.