GREEN BAY — Before donning the habit of a Christian Brother in 1962, Brother James Miller wore the bib overalls of a Wisconsin farm boy.

While in his green work clothes, repairing a wall outside of the Casa Indigena De La Salle — his religious community’s school for indigenous boys in Huehuetenango, Guatemala — Brother Miller, 37, was gunned down by three men Feb. 13, 1982. 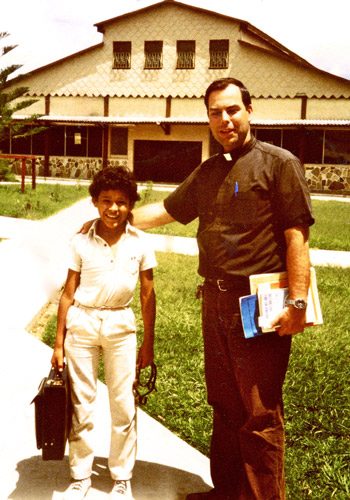 Christian BrotherJames Miller is pictured with a child in an undated photo in front of the Colegio De La Salle in Huehuetenango, Guatemala. BrotherMiller was killed by unknown assassins Feb. 13, 1982. (CNS photo/courtesy Christian Brothers of the Midwest)

Nearly 37 years after his death, Brother Miller will be beatified during Mass Dec. 7 at the Cathedral of Our Lady of the Immaculate Conception in Huehuetenango. He will be the first American-born Christian Brother declared blessed.

To his friends and family, Brother Miller was a farm boy through and through. He was also a deeply spiritual man who grew to love the poor, indigenous people of Guatemala, who, like him, were close to the land.

“Jim was a man of faith. He lived and gave his life helping poor Indian boys learn the trade of farming so they could feed themselves,” said fellow Christian Brother Stephen Markham, who grew up on a farm in Iowa and entered the Christian Brothers the same time as Brother Miller.

Born Sept. 21, 1944, in Stevens Point, Wisconsin, Brother Miller was the oldest of Arnold and Lorraine Miller’s five children. His siblings include brothers Bill and Ralph, and sisters Pat Richter and Louise Shafranski. Their father operated a dairy farm that, at its peak, had 68 cows, said Ralph Miller, who today operates the family homestead in Ellis with his brother, Bill.

The siblings recall their eldest brother as full of faith.

“He always wanted to be a priest at the start,” Ralph Miller said in a telephone interview. When Brother Miller was young, he used to play the role of priest and celebrate Mass.

“Jim made a tabernacle from an old clock and a monstrance from a tinker toy set,” said Brother Markham. “When he was around 10 or 12 years old, he was halfway home from confession when he exclaimed, ‘Oh, I forgot to say my penance.’ So he knelt right down there on the road and prayed.”

One of his duties on the farm was to tend to the chickens, said Brother Markham. “One day his brother Bill saw him kneeling over a hurt chicken and praying for it that it would not die.”

Working with his hands and fixing things around the farm helped Brother Miller later on as a missionary, said Shafranski, his sister.

“Jim’s background was a perfect fit,” she said in an email. “Not only did he have a true calling to the Christian Brothers, but the fact that he started from a humble farm background … gave him the knowledge to know how to fix things. It also kept him grounded to the basics of land, faith and family.”

He attended grade school in his hometown of Ellis, then entered Pacelli Catholic High School in Stevens Point in 1958. It was at Pacelli where Brother Miller was introduced to the Christian Brothers, who staffed the Catholic high school.

After one year at Pacelli, he joined the junior novitiate. In September 1959 he was sent to Glencoe, Missouri.

“In one day, I left the state of Wisconsin for the first time, took my first train ride and saw a building over four stories high,” Brother Miller wrote in a two-page autobiography for his religious community in June 1978.

He finished his novitiate in Winona, Minnesota, in 1963, earned a bachelor’s degree at St. Mary’s College, Winona, in 1966, and was sent to teach Spanish at then-Cretin High School in St. Paul, Minnesota.

Brother Miller’s first exposure to Central America was in July 1969, when he spent the summer in Bluefields, Nicaragua, studying Spanish. He returned to St. Paul, but made his way back to Puerto Cabezas, Nicaragua, in March 1974. During his five years in Nicaragua, Brother Miller helped build an industrial arts and vocational education complex; served as principal of a government-owned high school, Instituto Nacional Bartolome Colon; and even volunteered as a local fire department chief.

“Since I have quite a bit of experience in building construction, the Nicaraguan government recently asked me to supervise the construction of 10 new rural grade schools being built in the region,” he wrote in his autobiography. “I find a lot of satisfaction working among the very poor here in Nicaragua.”

His association with the Nicaraguan government of Anastasio Somoza led to Brother Miller’s departure after the Sandinista revolution in 1979. He returned to St. Paul and taught one more year at Cretin-Derham Hall High School before being assigned to Huehuetenango, Guatemala.

Brother Paul Joslin was president of the Christian Brothers community in Huehuetenango when Brother Miller arrived in January 1981.

“Brother James and I were the director and co-director of Casa Indigena,” which housed about 150 indigenous youth from the Guatemalan highlands who were training to be teachers, said Brother Joslin.

In a telephone interview, Brother Joslin recalled the tense buildup of fear following reports of pending violence, and the disbelief when he received word of Brother Miller’s murder.

The “preferential option for the poor,” a pastoral challenge presented by the Latin American bishops in 1968, influenced the Christian Brothers to provide education to the indigenous children in Guatemala and also led to military retaliation, he said.

Just days before Brother Miller’s assassination, the religious community was warned by a border patrol agent, whose office was located at a nearby army base, that members of a death squad were looking for one of the seven Christian Brothers in Huehuetenango.

“We were forewarned, but despite that, the decision that we made individually and collectively, was to remain in Huehuetenango for as long as possible,” said Brother Joslin.

On the morning of his death, Brother Miller informed Brother Joslin that he would accompany students on a picnic to celebrate Valentine’s Day. After returning, Brother Miller decided to fix a hole on a wall near the Casa Indigena entrance, just one block from the cathedral on a crowded shopping street.

“He had to get up on a ladder in order to do it,” said Brother Joslin. While on the ladder, three men walking past the entrance, pulled out guns and shot him numerous times. Sister Madeleva Manzanares Suazo, a nurse serving at a nearby hospice, heard the gunshots and ran to find Brother Miller on the ground. He apparently died instantly.

“When this happened, I was in the brothers’ house next to the school, which was one kilometer away from Casa Indigena,” said Brother Joslin. “When I got there, I can’t tell you how awful it was, the shock, but when I went to reach, to touch Santiago, there was a policeman standing there and he snapped at me and said, ‘Don’t touch him.’

“I did pick up the hat he was wearing … and it was still full of sweat, as if he were still alive,” added Brother Joslin.

The local bishop celebrated Mass the following day; more than 1,000 students, parents and friends of the Christian Brothers then processed to the local airfield.

The body of Brother Miller was returned to Wisconsin for another Mass, then burial at St. Martin Cemetery in Ellis, one mile south of the farm where he was raised.

In a memorial written shortly after Brother Miller’s death, Brother Markham said his friend “followed no other star but his own.”

“He was proud of his farm background and never hesitated to share his farm stories, no matter who the audience,” he said. “He loved his roots, he loved his family dearly.”

In December 1981, during a visit to Minnesota, when Brother Miller had knee surgery, Brother Markham “asked Jim if he wasn’t frightened by the thought of returning.”

“Jim responded, ‘You don’t think about that, that’s not why you’re there. There’s too much to be done. … If it happens, it happens,” Brother Markham wrote.

Brother Miller was one of more than 200,000 people killed during Guatemala’s 36-year civil war, which ended in 1996. He was the second Catholic missionary from the United States murdered in Guatemala.

Father Stanley Rother, pastor of St. James the Apostle Parish in Santiago Atitlan, Guatemala, was shot to death in his rectory July 28, 1981. Pope Francis officially recognized Father Rother, a priest of the Archdiocese of Oklahoma City, as a martyr for the faith, and on Sept. 23, 2017, Father Rother was beatified in Oklahoma City.

In an email, Shafranski recalled her brother telling her that he would return to Guatemala even though he faced danger.

“I could be kidnapped, tortured and killed, or I could simply be gunned down,” she said he told her. “I knew Jim was very dedicated and committed to his students in Huehuetenango. There was no stopping him from going back.”

Louise and Rich Shafranski will travel to Guatemala for the beatification Dec. 7. She is the only sibling who is able to attend.

“The one thing I hope people (remember) is that Jim was a real person. He was a son, brother, Christian Brother and friend,” she said. “He had a hardy laugh, a ready smile, a quick wit, a good sense of humor, and was a genuine hard-working person. He was a man who felt happiness and sorrow, had great love for both family and the church. He loved working with his hands, and was through and through a little farm boy at heart.”