All the animals, two by two

What do we know about Noah and his ark? 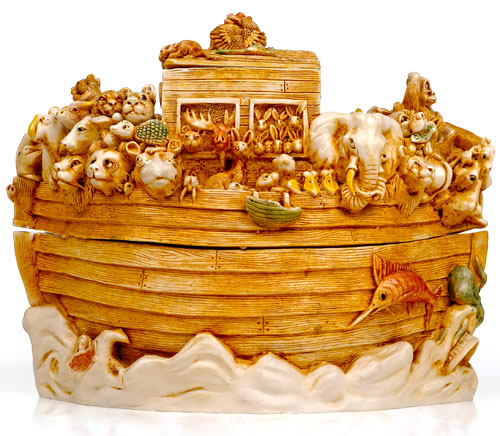 As we near the Christmas season, a popular gift, for generations, has been a Noah’s Ark. In a 2016 episode of Antiques Roadshow that rebroadcast recently, a woman brought in a large, carved Noah’s Ark. It was a gift from her now-deceased husband and had been made in the mid-19th century in Germany with more than 100 animals. It was appraised at about $5,000.

What do we know about Noah’s Ark? For example, how many animals were there? If you answered “two by two,” you know the first part of the story — “Of all living creatures, you shall bring two into the ark, one male and one female …”(Gen 6:19).

Try to imagine seven pairs of all the animals and birds you can think of today. So just how large was Noah’s ark?

But who among us knows what a cubit is? A “cubit” in the ancient world was not a precise measurement. Rather, it meant the length from a man’s elbow to his middle finger. No one is exactly the same size, so we can only guess Noah’s arm would have been about 18 to 21 inches (44 to 52 centimeters.) That means the ark was about 500 feet long, 83 feet wide and 50 feet high. (A modern football field is 360 feet long and 160 feet wide.)

We also know the ark was three stories high and had rooms inside (Gen 6:16). Estimating the volume of the ark varies, but sources often enjoy comparing it to the Titanic which was 882 feet by 92 feet by 175 feet high, or about one-third larger than the ark. Given its size and three decks, this means the ark could have held thousands of sheep (estimates range from 60,000 to 125,000), along with a year’s worth of food (40 days of rain, 150 days of flood crest and 150 days of receding water, according to Gen 7-8). However, since there were many animals besides sheep, the actual number on-board remains unknown.

The ark was probably made of wood, not steel like the Titanic. But the Bible is specific about what type of material: gopherwood. Now, most modern translations take this single reference to “gopherwood” in the entire Bible to mean cypress. However, the Hebrew word for cypress is berosh, not at all like the Hebrew words gepher or gofer for that wood. However, there is an Arabic word (Arabic words are often similar to ancient Hebrew): kufa. Kufa refers to the composition of reed boats sealed with bitumen, an early form of tar, to make them waterproof. There is also an ancient Assyrian word, giparu, which also refers to reeds. (Assyria had a great deal of interaction with ancient Israel.) So the ark may have been made of tightly woven reeds, rather than wood.

As far making the ark waterproof, sources on ancient building techniques point out that “pitch” as in Gen 16:14 — “cover it inside and out with pitch” — could refer to an early form of modern asphalt called bitumen. Bitumen could be found in deposits throughout ancient Mesopotamia.

However, water-proofing pitch, from tree resin, was also made by early Europeans and Native Americans by bleeding sap from pine or other evergreens. This sap, mixed with charcoal, made a water sealant. Since we know there were evergreen trees in the ancient Middle East — such as the cedars of Lebanon — Noah might well have used resin to make pitch.

We know the ark floated on the water for a year, but there is much debate about where it landed. Gen 8:4 tells us the ark “came to rest on the mountains of Ararat.” This is why many people believe Mount Ararat, now in modern Turkey, is the site. However, the use of the plural for “mountains” in Genesis indicates a range of mountains, rather than a single mountain. And Armenia has long considered this to mean a mountainous area in their land territory, known as Uratu and located near Lake Van. In this area lies Mount Cudi (Judi), located near the head of the Tigris River.

The Quran lists Mount Cudi as Noah’s “place of descent,” (11:44). This corresponds with ancient Syrian tradition of Djûdi Mountain (the same above-named mountain) being the site. Mount Ararat, while in Turkey, rests near the borders of Syria, Iran and Armenia. Also Ararat has at least two peaks: Great Ararat and Little Ararat, so Genesis could have referred to either of these, to Djudi Mountain or yet some other peak in the general area. While this location may not be greatly important to most people, it does show us why the “search for Noah’s ark” continues to this day.

A last point of interest about Noah’s ark focuses on Noah himself. The Bible tells us Noah was a good and blameless man and that he had three sons: Shem, Ham and Japheth. (Japheth was the oldest, but Shem was the ancestor of Abraham, so he gets listed first.) Further research shows us that Noah was a 10th-generation descendant of Adam (Gen 6:9) and that his own grandfather was Methuselah, the oldest man listed in the Bible. (Methuselah died at 969 years old.)

Noah was long-lived as well. Gen 5:32 says he was already 500 when he became a father. He was 600-years-old when the flood happened and he lived for another 350 years after the ark landed (Gen 9:28). What he did during all those years, we don’t know, except that he planted a garden and made his own wine.

As for the other four people who entered the ark: his wife and three daughters-in law, we know nothing. Not even their names. We do know, however, that the younger women became the mothers of Noah’s 16 grandchildren. From those grandchildren, various nations traditionally arose. For example, Ham’s son, Canaan, traditionally became the father of the people in the land of Canaan, while his brother, Mizraim, became the founding ancestor of Egypt.

All this from one boat that you might happen to see replicas of this holiday season.