removed hat does Joseph of Arimathea have to do with Christmas?

Don’t we usually hear about Joseph of Arimathea only during Holy Week, when — in all four Gospels — he claims the body of the crucified Christ from Pilate and arranges its burial? So what’s that got to do with Christmas? 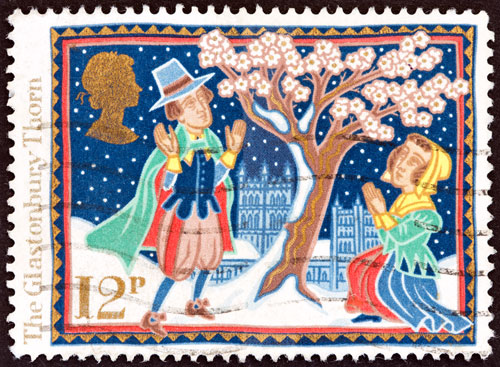 A stamp printed in the United Kingdom in 1986, from the “Christmas. Folk Customs” shows The Glastonbury Thorn. (Bigstock.com)

A legend in England says Joseph traveled to that British island nation — either with the teenage Jesus, or after the resurrection of Christ. His purpose in coming so far was to proclaim the Gospel and to hide the Holy Grail — the cup of the Last Supper.

According to the British legend, Joseph founded Glastonbury Abbey in Somerset in southwest England. Glastonbury has also been called the Isle of Avalon, because its hill (Glastonbury Tor) once stood on an island in a marsh or lake. Avalon is tied to the legend of King Arthur, but that is not the Christmas connection.

The Christmas connection has to do with Joseph of Arimathea and his staff. When Joseph and his companions arrived in Somerset, they climbed the hill. At the top, Joseph stuck his staff in the ground and claimed, they were “Weary all.” The hill eventually became called Wearyall Hill (sometimes known as Wirral Hill). And Joseph’s staff took root there.

This staff eventually grew into the start of a special type of hawthorn tree that now grows in England. Unlike most hawthorns, the Glastonbury Thorn flowers twice a year: once in spring and again just before Christmas. The tree — and its offspring — are also known as the Holy Thorn.

According to The Gardens Trust in London, the Glastonbury Thorn “is not a native British hawthorn but one that originates in the Middle East. Crataegus monogyna var. biflora is extraordinary — indeed unique. Unlike ordinary hawthorns, it bears flowers and berries at the same time, and flowers at Christmas time as well as in the spring, although the winter blossoms are usually much smaller than the May ones and do not produce haws or berries.”

Each Christmas, students from Saint John’s Church of England Voluntary Controlled Infants School gather around the Glastonbury Thorn tree at their school to sing carols before the end of the term, just before Christmas. Then the eldest student gets to cut a spray of the flowers from the thorn tree. This spray of flowers is presented to Queen Elizabeth II for her Christmas table, usually by the mayor of Glastonbury and often accompanied by students. In England, the monarch is also the head of the Church of England, so the hawthorn ceremony has religious, as well as Christmas, significance.

At the nearby St. John’s Church (Anglican) in Glastonbury, another thorn tree has a spray cut from it as well. (Since many of the hawthorns have been damaged over the years, this tree may be used for the queen’s table as well. (This year’s cutting at the church, which dates back to St. Dunstan’s time, happened on Dec. 19.) The church contains a stained glass window of Joseph of Arimathea and his staff.

This tradition of sending a flower from the Holy Thorn to court dates to the 16th century when Bishop James Montague (Church of England) presented a thorn flower to Queen Anne, consort of King James I. The tradition has continued ever since. Not without controversy.

The Glastonbury hawthorns have been vandalized often. The first happened in the 17th century by Puritans who believed the tree was a source of superstitious beliefs.

In May 2010, Glastonbury’s main tree, on Glastonbury Tor, was cut down by a vandal with a chainsaw. Today, it is not Puritans, but people who believe the Glastonbury Thorn attracts New Age followers who oppose it.

Earlier this year, the landowner removed the tree’s remnants on Glastonbury Tor. Dismayed, the town council reacted. After a heated June meeting, they agreed to plant a new Glastonbury Thorn at the local Pilgrim Reception Center.

Fortunately, cuttings from the original tree were fostered over the centuries, and the new tree will come from one of these. The only way to propagate this hawthorn is from cuttings, since it does not grow from seeds. Other cuttings have been sent as gifts worldwide over the years. For example, there is a Glastonbury Thorn growing on the grounds of the Washington National Cathedral, the Cathedral Church of Saint Peter and Saint Paul (Episcopalian).