Fr. Burkart, the son of the late Killian and Marie (Schauer) Burkart, spent much of his childhood in New Franken. He couldn’t pinpoint a moment when he first considered the priesthood, but credited the influence of his uncle, Fr. Raymond Schauer, and other priests. His family was involved in the church, including his mother who was the organist at St. Kilian Church. Fr. Burkart and his brothers were altar servers. 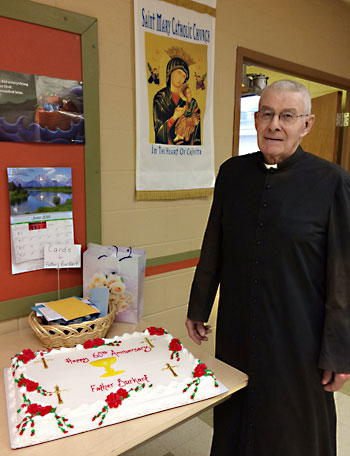 Fr. Don Burkart is pictured at a reception on his 60th anniversary of ordination on June 3, 2018, at St. Mary’s Fellowship Hall in Crivitz. Fr. Burkart served the Crivitz parish for 30 years. (Submitted PHoto | For The Compass)

The family moved to Green Bay when Fr. Burkart was in seventh grade. He attended Cathedral School for two years and planned to move on to junior college at St. Lawrence Seminary in Mount Calvary, but enrollment was full. He attended Central Catholic High School in Green Bay for one semester. St. Lawrence had an opening for the second semester.

Fr. Burkart then studied philosophy and theology at Saint John Seminary, Collegeville, Minn. He was ordained to the priesthood by Bishop Stanislaus V. Bona on May 31, 1958, at St. Francis Xavier Cathedral, Green Bay.

His first appointments were as assistant pastor of Holy Family Parish, Elcho, and St. Boniface Parish, De Pere. In 1963, much to his surprise, he was appointed to Catholic Social Services for the diocese.

“I was the director of the Appleton office,” said Fr. Burkart in an interview with The Compass to mark his 50-year jubilee. “I did case work there for seven years. I didn’t have any special training in social work. It was interesting work, but I wouldn’t have wanted to do it for a lifetime.”

Fr. Burkart made the Crivitz area home. He served the parish for 30 years. The benefit of that longevity was getting to know the families, he said.

“One of the difficult things is you don’t have fellow priests nearby,” he explained. “Everyone is spread out, so you have to make your own life.”

A cottage on Lake Noquebay provided opportunities for sailing, one of Fr. Burkart’s pastimes.

“He had a beautiful place on Noquebay,” said Fr. Mike Betley, pastor of St. John-Sacred Heart Parish, Sherwood/St. John; St. Mary Parish, Hilbert; and St. Mary Parish, Stockbridge. “He had a prime site. He then bought a farm, which was about 40 acres, which he filled with trees. He planted them all himself.”

Fr. Betley’s parents had a cottage in Crivitz. His friendship with Fr. Burkart grew during Fr. Betley’s time serving at parishes in Niagara, Aurora and Pembine.

“I got to know him very well,” he said. “He was very handy. He trimmed all the trees by hand. I remember when he trimmed 500 Christmas trees and then went in and had open heart surgery a week later. He had the ability to recover very quickly.

“He was a farmer at heart,” added Fr. Betley. “His garden was always important to him.”

Fr. Burkart gave away the produce that he grew.

“He was one of the most generous people I have ever met,” said Fr. Betley. “He surely loved the people that he served and he continued that in retirement.”

Fr. Burkart is survived by a sister, Sr. Ruth Burkart, CSJ. He was preceded in death by his parents, and five siblings: Norbert, Francis, Robert, Edward and Elinor.

The funeral Mass will be celebrated at 10:30 a.m. on Friday, Dec. 6, at St. Mary Church in Crivitz. Bishop David Ricken will be the celebrant. Fr. Betley will serve as the homilist. Burial will follow in St. Mary Cemetery.