From career to community service, Robyn Hallet’s faith is her compass

GREEN BAY — No matter how busy Robyn Hallet, executive director of Literacy Green Bay, expects her day to be, there’s one event that’s never taken off her calendar: Mass.

Each workday you’ll find her worshipping at the 7:15 a.m. Mass at St. Willebrord Parish, located just a couple blocks from her office at 424 S. Monroe Ave. in downtown Green Bay. She’s been executive director of the nonprofit program which provides English language tutoring since September 2018. Prior to that, she worked in Green Bay’s city hall. 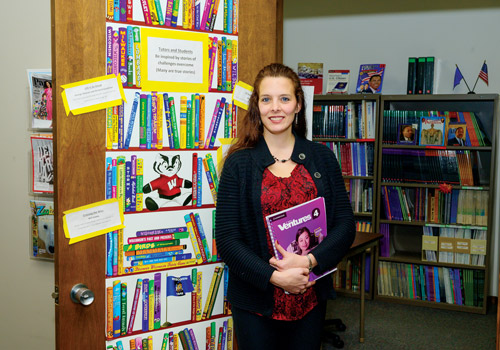 “It’s the perfect time for people who work downtown,” said Hallet, noting Mass usually concludes by 7:50 a.m. “Even the past few days this week I had to go to Ashwaubenon in the morning for different meetings and I still go to Mass,” she said, adding that it is well attended. “There’s an average of 60 people.”

Hallet, who was a volunteer for 20 years with Literacy Green Bay before becoming executive director, said her Catholic faith “inspires me to be who I am, being the loving and caring person, and welcoming the stranger that Jesus calls us to do.”

A native of Pilsen and graduate of Luxemburg-Casco High School, she has fond memories of growing up in the country. Her parents, Janice and Wayne J. Stodola, owned Stodola’s Shangri-La, a country bar on Highway 29, not far from St. Joseph/St. John Church, which is today part of St. Therese Parish in Denmark. Originally built in the 1800s, the historic building was purchased by the state in 2000 as part of the Highway 29 expansion project and taken down.

Hallet also has fond memories of growing up in a good Catholic home. “Both sides of my family are Catholic. I really attribute my Catholic faith today to my foundation in my childhood,” she said.

One of the toughest times in her life came at age 15, when her beloved father died of leukemia at age 44. “My faith got me through it,” she said.

Hallet attended UW-Green Bay and it was there she “started getting involved with young adult activities in the diocese.” It’s often during college, she said, when students begin to question their faith. For Hallet, college became the time when going to Mass evolved from a weekly obligation to an integral part of her life.

She graduated in 1998 with a double major in Urban and Regional Studies and Spanish, seemingly an unexpected decision for someone raised in small-town Pilsen. “I just really enjoyed the intro to Urban Studies. … I loved Spanish, too,” said Hallet, who studied for one semester in Spain. “It just opened my mind to everything in the world, that the world is so much bigger than we have at home,” she said.

During college she had an internship with the Brown County Planning Commission. Hallet would then work the next 20 years in community housing solutions, eventually becoming housing administrator for the Green Bay and Brown County Housing Authority for nine years prior to coming to Literacy Green Bay.

“Green Bay has a significant lack of affordable housing,” said Hallet, emphasizing that stable, secure housing is the foundation that leads people to advancements in their lives. Today she is a member of the Homeowner Selection Committee for Greater Green Bay Habitat for Humanity.

Literacy Green Bay’s services include English Language Learning (ELL) classes, Family Literacy Classes and adult tutoring. The Children First Family Literacy program is a GED program which also provides parenting skills and early childhood learning. Citizenship classes are also offered. Today Hallet is in the midst of a $500,000 endowment campaign for Literacy Green Bay which, she said, will “ensure that our services are going to be available for generations to come.”

Volunteer tutors are the backbone of Literacy Green Bay, with the next training set for April.

“A lot of people have the false notion they have to be teachers. We like to say that anybody who speaks English can be a tutor,” Hallet said. “It’s very rewarding and it could be life changing for an individual.”

Working and worshipping in downtown Green Bay has allowed Hallet to build a life that brings her meaning.

“St. Willebrord, as you know, has a huge Latino population,” she said. On Sundays, she worships at the bilingual Mass. “It’s the combination of my two passions: my faith and the Hispanic community and language.”

Hallet is also enrolled in the three-year Discipulos de Cristo, the diocese’s Hispanic lay ministry formation program which is taught in Spanish. “I did it as a challenge to myself to improve my Spanish while incorporating my Catholic faith,” she said.

“I have a great love for the Latino community,” Hallet said, and she looks forward to becoming even more involved.

Words to live by: “We can’t all do great things, but we can do small things with great love.” — St. Teresa of Kolkata