ALLOUEZ — The Compass will sponsor a 13-day pilgrimage to Hungary and Poland next October. Some of the trip’s highlights include a stop at Poland’s Jasna Gora, the Marian shrine that is home of the Black Madonna icon, also known as Our Lady of Czestochowa; Wadowice, Poland, birthplace of St. John Paul II; and Auschwitz, Poland, home of the World War II Nazi concentration camp.

Fr. John Girotti, vicar for canonical services and associate moderator of the Curia for the Diocese of Green Bay, will lead the pilgrimage. Pilgrims will depart from Green Bay by bus to Chicago on Friday, Oct. 2, and return on Wednesday, Oct. 14. 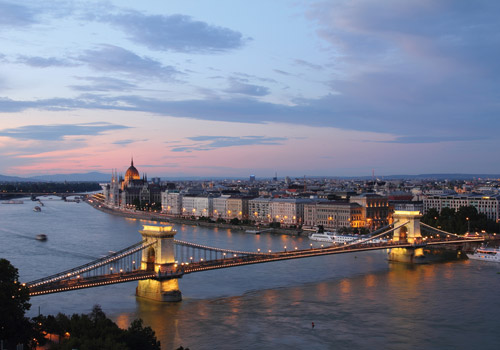 A nighttime view of the Chain Bridge and Danube River in Budapest, Hungary. The Compass will sponsor a pilgrimage to Hungary and Poland Oct. 2-14, 2020. Fr. John Girotti, vicar for canonical services and associate moderator of the diocesan Curia, will lead the pilgrimage. (BIGstock.com)

“Poland is the birthplace of St. John Paul II, who was pope for 27 years,” said Fr. Girotti. “He’s a saint, a beloved figure, and to see where he lived, grew up and the country that formed him is an inspiration for all of us.”

Poland and Hungary are “really the two places in Europe where the faith has remained strong, despite persecution and communism,” added Fr. Girotti. “To be able to see that vibrant faith is a wonderful thing.”

The two countries also offer much to pilgrims in terms of architecture, nature and history, according to Fr. Girotti, adding that a visit to Auschwitz “is a very powerful reminder of the culture of life and death and how we need to treat life.”

Oct. 3: Arrive in Budapest and travel by motorcoach to Gellert Hill, named after St. Gerard, the first bishop of the Kingdom of Hungary, who was thrown to his death from the hill. Free time follows for lunch, then an afternoon visit to the Jesuit Church of the Sacred Heart. Pilgrims will pray the Divine Mercy Chaplet here, as well as celebrate Mass. The day ends with hotel check-in and dinner.

Oct. 4: Pilgrims will spend the day viewing the Budapest landmarks. Mass will be celebrated at St. Matthias Church, also known as the Church of Our Lady. The original church was founded by St. Stephen of Hungary in 1015 and was destroyed by the Mongols in 1241. The current church was constructed in the 13th century. The day will also include a river excursion on the Danube River, with dinner served aboard the boat.

Oct. 5: Following breakfast, the group will visit the Marian Shrine of Mariaremete in Budapest for Mass. The shrine houses an image of the Blessed Mother placed there by a woman, which became a pilgrimage site after a blind woman regained her sight around 1800. St. John Paul II once prayed at the site. The day concludes with dinner and a traditional Hungarian puzsta horse show.

Oct. 6: Pilgrims will travel to Hungary’s Veszprem County, home of Lake Balaton, and visit Veszprem, known as the “City of the Queens.” This is where queens of Hungary were crowned by the archbishop. Mass will be celebrated at the Cathedral of St. Michael, followed by a visit to Herend, where guests will tour a Hungarian porcelain manufacturing shop. The evening will be spent in the Lake Balaton area.

Oct. 7: The group will travel to Tihany, where in 1055 King Andrew I established a Benedictine abbey by the shores of Lake Balaton and dedicated it to the Virgin Mary and to St. Aignan of Orleans. The king was buried in the church monastery in 1060. King Andrew is known for strengthening Christianity’s stature in the kingdom of Hungary. Mass will be celebrated at the abbey, followed by a visit to the Tapolca Lake Caves.

Oct. 8: Pilgrims will depart Hungary and travel to Krakow, Poland. The first stop is Bratislava, the capital of Slovakia, where Mass will be celebrated at the city’s Franciscan church. The group will arrive in Krakow, check into their hotel and enjoy dinner.

Oct. 9: A visit to Wadowice, birthplace of Karol Wojtyla (St. John Paul II) is the highlight of this day. Mass may be celebrated at the Wadowice Basilica, followed by a guided tour of the St. John Paul II Museum and free time for lunch. The group then departs for the salt mines of Wieliczka, which features many fascinating religious sculptures carved in salt. Upon return to the hotel in Krakow, pilgrims will enjoy dinner on their own.

Oct. 10: Following breakfast, pilgrims will enjoy a tour of Krakow, including a visit to Wawel Cathedral, where Karol Wojtyla was ordained as cardinal/archbishop of Krakow. Mass may be celebrated at St. Leonard crypt, where St. John Paul II celebrated his first Mass. Other sites to visit will include the royal castle, Market Square and St. Mary’s Basilica.

In the afternoon, the group will travel to Auschwitz, where they will learn about the atrocities that took place during World War II, as well as the exemplary lives of St. Maximilian Kolbe and St. Teresa Benedicta of the Cross (Edith Stein). The day ends with dinner in Krakow.

Oct. 11: On this Sunday, pilgrims will travel to Lagiewniki following breakfast and visit the Shrine of Divine Mercy, which includes St. Faustina’s convent chapel and tomb. The group will enjoy an orientation tour and pray the Chaplet of Divine Mercy. The also includes the St. John Paul II Center, where Karol Wojtyla worked during the time Poland was occupied by Nazi Germany. The day ends in Czestochowa for dinner and overnight stay.

Oct. 12: Following breakfast, pilgrims will tour Poland’s most famous Marian Shrine, Jasna Gora, home of the Black Madonna icon, Our Lady of Czestochowa. Mass will be celebrated at the shrine, with free time for shopping, lunch and personal prayer. The group will then travel to Warsaw for dinner and overnight stay.

Oct. 13: A mini-tour of Poland’s capital city will take place after breakfast. Sites include the Old Town, Market Square, Warsaw Jewish Quarters, Ghetto Monument and the tomb of Fr. Jerzy Popieluszko. After lunch, the group will visit Niepokalanow, known as the City of the Immaculate, where St. Maximilian Kolbe founded a monastery in 1927. Mass will be celebrated here, followed by a guided tour of Niepokalanow. The group returns to Warsaw for a farewell dinner before the next day’s departure home.

Oct. 14: After breakfast, the group boards their flight home from Warsaw.

Cost for this pilgrimage is $4,599 per person if paid before April 10, 2020. This includes hotels, double occupancy, tips and most breakfasts and dinners. An optional roundtrip coach bus is available from Green Bay to Chicago’s O’Hare International Airport for an additional $80.

For more details or to receive a brochure with more information, contact Amy Kawula, (920) 272-8212 or [email protected] or download the brochure.