MANITOWOC — St. Francis of Assisi parishioners decided to do something different this year in conjunction with World Marriage Sunday. 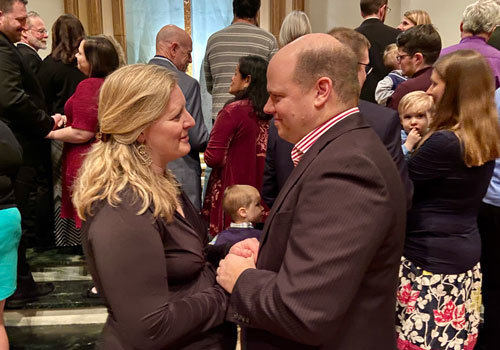 Dianne and Greg Vadney, along with other couples, reaffirm their wedding vows during a “Celebration of Marriages” on Feb. 15 at St. Francis of Assisi Church-Waldo site in Manitowoc. The Vadneys have been married for 15 years. (Suzanne Weiss | For The Compass)

Instead of just displaying wedding photos as in the past, the parish held a “Celebration of Marriages” on Feb. 15 at its Waldo site.

Forty-five couples — married from six months to six decades — renewed their vows and received blessings. The event was complete with a wedding procession, flower girls and a mini wedding reception. The celebration was organized by the parish’s youth and family ministry.

“This is the first time we are hosting this event. We thought, ‘Let’s do something more personal, something that would help couples realize the beauty of their vocation of marriage,’” said Elizabeth Gruenke, coordinator of youth ministry for St. Francis of Assisi. “Marriage is by no means a cakewalk. We’re trying to do things to help lift up couples, lift up families and support them in their vocation.”

Fr. Doug LeCaptain, Fr. José López and Fr. Bill Evans led the affirmation of vows. The event also offered the opportunity to say prayers for engaged couples, for the widowed, and for those who were married civilly or in another church. It was free and open to all, especially children and grandchildren.

“One of the things I think is neat about doing an intergenerational event like this (is that) it’s a way of helping a group of people, in this case families, to retell their stories this time with their kids,” said Dianne Vadney, family ministry coordinator for St. Francis of Assisi.

“By having couples come forward in front of their kids and reaffirm their wedding vows, it not only gives the couples an opportunity — especially around Valentine’s Day – to look back on that day with fondness as well as to reflect on how far they’ve come. It also gives the children a visual, physical retelling of the story as a family and their parents’ commitment to each other,” she said.

“The last time we walked down the aisle was 47 years ago,” said Noel Hansen, who renewed his vows with wife, Jean. “The night I met her I knew she would be the one. Marrying her was the best thing that ever happened to me in my life.”

Norbert and Shirley Pellow were celebrating 60 years of marriage. “Love and communication are the secrets to a long and happy marriage,” Norbert said.

Three generations of one family took part in the celebration. Among them were Mike and Molly Wall, married 12 years.

“I think it’s great that so many people wanted to be a part of it,” Mike said. “We thought it would be neat, especially now, having kids, understanding all that it means,” added Molly.

“I thought it was such a great idea, especially on the heels of Valentine’s Day,” said Gayle Fritsch, celebrating 40 years with her husband, Glenn. “I like the fact that it isn’t just couples but families. I think it’s important for the family, the children especially, to see the importance of the sacrament of matrimony.”

The reason Catholics consider marriage a sacrament is because “we look at it as a reflection of divine love and as a way for us to better understand God’s own unconditional, unending love for each of us,” Vadney said.

“This also offers a great opportunity for us as a church to encourage couples who want their marriage blessed by the church or convalidated, which means that they want to live a covenant marriage as a sacrament in the church,” she said. “By connecting with these couples, we then have the opportunity to walk with them through the process for preparing for the sacrament of marriage.”