How many of the Ten Commandments go on each side?

In the Gospel this weekend (Mt 5:17-37), Jesus mentions the Ten Commandments in his teaching. Have you ever looked at images of the Ten Commandments and wondered about the various ways the numbers appear on the tablets: five and five, or three and seven, or four and six? 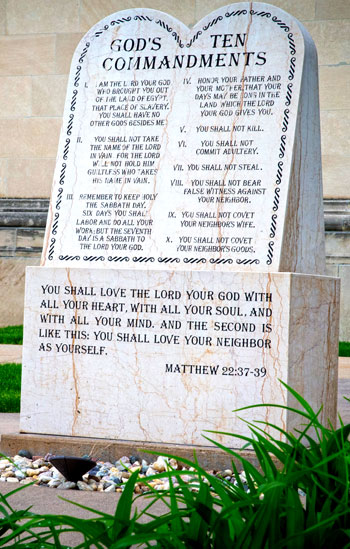 We all know the Exodus story (20:1-17) of Moses receiving the commandments from God. They are also called the Decalogue (“Ten Words” in Latin) and Aseret HaDibrot (“Ten Sayings” in Hebrew).

These commandments, as the Catechism of the Church explains, “sum up and proclaim God’s law” (n. 2058). It adds that, while they are a law, the commandments also proclaim God’s love. They were given as part of the covenant relationship that was forged between God and his people.

So the Ten Commandments are about relationship. That is also how the numbering of the commandments breaks down.

In Jewish tradition, what Catholics see as the first commandment is considered to be the first and second commandments: “I am the Lord your God, who brought you out of the land of Egypt, out of the house of slavery. You shall not have other gods beside me.” The Catholic tradition of combining these two into one commandment traces to St. Augustine in the fifth century. Since the Lutheran church did not form until the 16th century, it also follows this numbering tradition.

Thus, the numbering is slightly different until the last commandment. While the Catholic tradition sees the warning against coveting a neighbor’s wife and a neighbor’s property as two different commands, Jewish tradition combines them both into the tenth and final commandment.

Most Protestants, other than Lutherans — as well as the Orthodox churches — follow a numbering similar to the Jewish tradition.

When the tablets of the commandments are represented, placement of these laws also varies. In the Jewish tradition, there are two ways of representing the Ten Words. The way you will see in most synagogues today is five commandments on one tablet and five on the second.

However, there is also a strong tradition in Judaism that the commandments were written on a single tablet, with the second table being a copy. Thus there are 10 on each tablet.

Dr. Meshulam Margaliot of the Bible department at the Bar-Ilan University in Tel Aviv, Israel, notes that it was common in the ancient world to make a copy of important contracts. One copy was kept by each party — in this case, God and his people. God’s copy was put in the Ark of the Covenant. The people’s copy also went in there because it was common to place the secondary party’s copy of a contract in the temple of their god. Moses’ people were the secondary party.

Margaliot points to still-existing copies of a contract between the Egyptian Pharaoh Ramses II and the Hittite King Hattusilis III, dating to 1270 B.C. to support his argument.

When Jewish tradition shows five commandments on one tablet and five on another, it is showing relationship. The first commandments deal with how we relate to God: no idols, keeping the Sabbath, taking the Lord’s name in vain (one through four in their numbering.) Commandments Six through 10 are on relationships with neighbor: not bearing false witness, not coveting, not stealing.

This leaves one other commandment: the one about your father and mother. Why, in Jewish tradition, is it placed on the same tablet as the commandments about God?

This parental command can thus be viewed as a lynch pin, something that keeps two parts working together. Obeying parents is similar to obeying and honoring God. God, besides being our creator, cares about us as a parent cares for their child. Parents ask obedience from children. They know and want what is best for their children and want them to grow in wisdom. But good parents also want obedience to come from trust and love, not from fear or control. The same is true with God.

This is why you see tablets representing the Ten Commandments numbered with 3+7 or 4+6 or 5+5.

Of course, there is one other way to number the commandments. Jesus gave us that, and it only has two numbers: “Love the Lord your God” and “Love your neighbor as yourself” (Mk 12:30-31).