What is an annulment and why does it exist?

ALLOUEZ — While most of us have heard about annulments, and know people who have received them, we don’t really know that much about the process.

For example, some may think an annulment means a once committed relationship never existed. Instead, what an annulment really means is that some important factor did not exist to make this relationship a valid marriage according to canon (Catholic Church) law.

Other people don’t realize that, even if they were married in another faith, they may still need an annulment to get married in the Catholic Church. 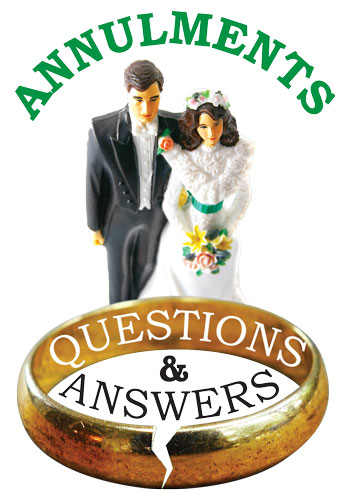 “Annulment” is the word we use to refer to what the church calls “a declaration of nullity.” This declaration means that, at the time of the wedding, one or both spouses were not able to enter into a sacramental marriage.

When the Catholic Church declares nullity, it means that a true sacramental marriage never existed. This does not mean the couple did not believe they were married, or that their marriage was “a fake.” It simply means that, while the couple did exchange marital vows, a valid bond of marriage was never formed.

The U.S. Conference of Catholic Bishops explains annulment this way: “A marriage thought to be valid according to church law actually fell short of at least one of the essential elements required for a binding union.”

These elements include both parties being free to marry; consent that was freely exchanged; an intent to marry for life, the intent to be faithful; the intent to be open to children; and consent made before at least two witnesses.

When a person seeks an annulment, he or she often approaches their parish priest, who explains the process. Usually, a civil divorce must have taken place first, which indicates there is no hope of reconciliation.

The person making the request is called the petitioner; the former spouse is the respondent. The respondent has the right to be involved in the process from beginning to end.

The process to determine nullity is a canonical trial. In other words, this is a court case in a church court, governed by the law of the church (canon law).

Once a petition is received, a field advocate and a defender of the bond are assigned to the case. A field advocate assists the petitioner and respondent in gathering information for the diocesan marriage tribunal. The defender of the bond, assigned to “protect the marriage bond,” reviews the case’s materials. He presents any significant reasons in favor of a valid marriage and against a declaration of nullity. Expert witnesses (each called a peritus) may be consulted.

All this information is reviewed by the marriage tribunal, which is headed by a priest — the judicial vicar — trained in canon law. A declaration of nullity is made by the diocesan marriage tribunal.

Not all requests for annulment are granted. The decision of the tribunal can be appealed to the Archdiocese of Milwaukee or the Roman Rota by either party or defender of the bond.

These are the basics of the annulment process in the Catholic Church. Since it is a complex issue and often misunderstood, The Compass decided to ask both the judicial vicar of the diocesan Marriage Tribunal, Fr. Brian Belongia, and several field advocates for the tribunal about the questions they often hear about annulment.

The most commonly heard misconceptions by those who work in the marriage tribunal will be explored in subsequent parts of this series. These include: