‘Enhancing Your Home Devotions’ event to be held in Green Bay

Editor’s note: The following story was written to announce a public event scheduled for April 18 and 19 at St. Francis Xavier Cathedral in Green Bay. Due to guidelines established by the Diocese of Green Bay following Gov. Tony Evers’ ban on gatherings of 50 people or more due to the coronavirus pandemic, the event has been postponed. Rather than pull the story, The Compass has decided to publish it now and announce later when the event is rescheduled.

GREEN BAY — The Green Bay Diocese Museum is hoping to find homes for abandoned devotional objects and sacramentals that it recently acquired.
The museum, located in the lower level of the Cathedral Center, adjacent to St. Francis Xavier Cathedral, is hosting an “Enhancing Your Home Devotions” event. More than 200 devotional items such as religious statues, rosaries, Nativity sets, paintings and prayer booklets will be available for a donation to the museum.

Sherry Steffel, president of the Green Bay Diocese Museum Board, said the religious items were donated last April to the Diocese Museum by the Two Rivers Historical Society. The objects were donated to the historical society following the 2002 merger of St. Luke, St. Francis and St. Mark parishes in Two Rivers and Manitowoc creating St. Peter the Fisherman Parish. 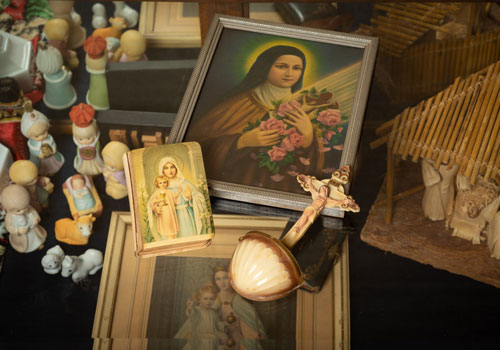 A display case near the Cathedral Center at St. Francis Xavier Cathedral in Green Bay includes some of the devotional items and sacramentals that will be available for a donation. Other items will be included in a silent auction. More then 200 items will be on display. (Sam Lucero | The Compass)

“We got 14 pieces of furniture, 26 paintings or prints and 40 boxes of other kinds of artifacts,” she said.

Because of limited space in the museum at St. Francis Xavier Cathedral, only items that meet a certain criteria go on display, said Steffel.

“Ordinarily, the museum board does not take in home devotional type items because we don’t have a huge facility,” she said. “So we only take in items that we can accession (inventory and catalogue), that are liturgical in nature or belonged to a bishop, things of that type.”

It took the museum board three months to sort through all of the donated items and decide what to keep and what to give away. For example, said Steffel, approximately 50 rosaries were donated to the diocesan World Missions Office for shipment to the missions.

“We thought, ‘What are we going to do with these things?’ We decided we would have an event. It’s not a sale, because there is no price on anything,” Steffel said. “All of the statues of the Sacred Heart will go on one table, all of the statues of the Blessed Virgin on another table, that kind of thing. People can come through and say, ‘I’ll give you a dollar for that.’ Clearly our answer will be OK.”

Steffel believes some of the items the Two Rivers Historical Society donated came from families and not from the church merger.

“My sense is that a lot came from children or siblings of people who passed away,” she said. “They didn’t want to throw them away, but they didn’t know what to do with them, so they gave them to the historical society or the local church.”

Other items that probably have more value will be sold in a silent auction, said Steffel. Since the Diocese Museum does not charge for admission, nor does it receive funds from the diocese, the money raised will help support its upkeep.
“We are hoping children, especially, might come in and say, ‘I would like to have this in my bedroom,’” said Steffel. “We wish these items go to homes where they will be respected and used to strengthen our faith.”

A display case near the Cathedral Center at St. Francis Xavier Cathedral in Green Bay includes some of the devotional items and sacramentals that will be available for a donation. Other items will be included in a silent auction. More then 200 items will be on display.