As we reach the apex of our Lenten journey this weekend, all of us greet the Easter celebration with mixed feelings. We long to be together in community and celebrate the joyous resurrection of our Lord, Jesus Christ. Yet, in the middle of an unprecedented global pandemic, it is our duty to each other to celebrate at home. 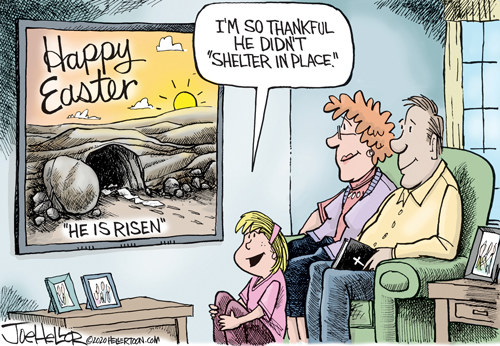 For the past several weeks, Catholics around the Diocese of Green Bay and elsewhere have been restricted to watching Sunday Mass on television or livestreamed on a computer. We have been told to make an act of spiritual communion, asking Jesus to “come at least spiritually into my heart,” since we cannot receive him sacramentally.

The longing for Jesus, the longing for being part of a spiritual community are among the reasons some people have called on elected leaders to allow churches to hold public religious services for Easter. While the sentiment is admirable, it’s wrong.

According to the Milwaukee Journal Sentinel, Wisconsin Assembly Republicans wrote a letter April 2 to Gov. Tony Evers, asking him to ease his “safer-at-home” order during the COVID-19 pandemic and allow in-person services for Easter and Passover.

“It is more important than ever that we allow Wisconsinites to observe their individual faiths,” Assembly Speaker Robin Vos, as well as other members of the Assembly GOP caucus wrote in their letter to Evers. On Palm Sunday, Evers declined the request.

“As a state and as a nation, we are heading into the worst of this public health crisis,” the governor’s spokeswoman, Melissa Baldauff said. “The governor understands that for many Wisconsinites, their faith is a source of comfort, especially in these difficult times, but in order to protect the health and safety of all Wisconsinites, he will not be rolling back the provisions of the safer-at-home order.”

It is sad to think that partisanship could interfere in something as important as a public health crisis. What is needed is solidarity in our response. This is the approach the Vatican’s Pontifical Academy for Life suggests.

“An emergency like that of COVID-19 is overcome with, above all, the antibodies of solidarity,” the academy suggested in a seven-page letter posted on its website, Catholic News Service reported March 30. The letter, “Pandemic and Universal Brotherhood,” also focused on other ethical concerns, but its message to political leaders was clear: step aside. “Politically, nations must take a broader view that goes beyond national interests because responses cannot be limited to what happens within one’s own borders if they are to be effective,” it said.

“Reckless or foolish behavior, which seemingly affects only ourselves, becomes a threat to all who are exposed to the risk of contagion,” it added. The letter echoes the sentiments of Pope Francis, whose concern for the common good led him to discontinue public liturgies during Lent and Holy Week.

The risk of contagion is what guided our diocesan leaders to follow the Centers for Disease Control and Prevention’s advisories regarding the celebration of public Masses. For our state lawmakers to take a stand against the advice of health professionals seems ill-advised.

As the rise in COVID-19 cases is about to spike (Surgeon General Jerome Adams said April 5 that Holy Week “is going to be our Pearl Harbor moment, it’s going to be our 9/11 moment”), risk-taking is not what is needed at this time. Instead, political leaders who are concerned about canceled religious services should promote livestreamed and televised services as a sign of solidarity.