GREEN BAY — When Margaret Guzek reflects on her life, she talks about all the special people, those who have helped her family navigate through some tough times and those she’s tried to help in their times of need.

“I certainly have seen the face of God in people who have crossed our paths and helped us,” said Guzek. 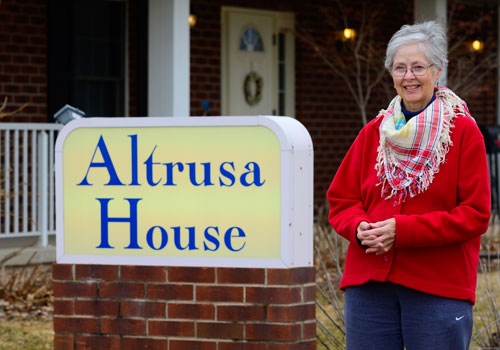 A native of Oshkosh and graduate of UW-Oshkosh, Guzek moved to Green Bay to teach French and Spanish. She met her husband John, a native of Michigan’s Upper Peninsula, in Green Bay. He was a chemical engineer at a paper mill.

When the couple had the first of their three children, they decided she would be a stay-at-home mom until all the kids began school. When Guzek returned to teaching, most of it was in third grade at Wilder Elementary School in Green Bay.

“It’s a wonderful age,” said Guzek, who retired from teaching in 2007. “But one of the nicest things about third graders is they’re really becoming their own person, but they still love mom and dad,” she said.

Their oldest, Mary-Helen lives in Minneapolis, and she and her husband have two children. Their son, Jack, was born with special needs. Their youngest, Katie, is a children’s librarian with the Brown County Library.

“I think one of the reasons my two daughters are empathetic and kind is their experience with Jack, and they’re wonderful sisters to Jack,” said Guzek.

Jack, now 46, was born with a cleft lip and palate and neurological problems. To this day, he functions at a 4-year-old level, she said.

“As a kid he had that gleam in his eye,” said Guzek of Jack. But the challenges have been many. “I tell you, we didn’t do it alone,” she noted. Of the many educators, caregivers and medical professionals, “when it comes to people who have helped us on this road” to meet Jack’s needs, “They are special people. … I think they’re saints,” she said.

As a child, “Jack was just wild, he was like a feral animal,” Guzek said. It was at the Mendota Mental Health Institute in Madison where he and they got help. “They saved Jack, they gave him a life. … It was absolutely wonderful. Jack learned how to be a little boy, not a wild animal,” she said.

Her advice to special needs parents, she said, is to accept help: “You just can’t do it by yourself.”

The Guzeks joined Resurrection parish in 1976. “It’s an extremely welcoming community,” she said. Guzek has taught religious education and summer Bible school. “Years ago, when the kids were little, we were part of a family choir,” she said.

Currently she is a member of the Disciples Group, a women’s group which meets the second and fourth Wednesday of each month. “Sometimes we’ll use a book, sometimes videos. … We have wonderful discussions,” she said. Their next selection is the book “The Time is Now: A Call to Uncommon Courage,” by Benedictine Sr. Joan Chittister.

She is also a member of the Health and Wellness Committee. “Right now, I and another member are collecting positive sayings and we’re putting them in the bulletin,” she said.

Guzek is also active in Hilltoppers, a group for people age 55 and over which meets monthly at Resurrection. That’s where she met Annie Bongiorno, executive director of the Altrusa House, which provides accommodations for guests who have a loved one in the hospital or are themselves undergoing outpatient treatment.

She started volunteering about a year ago. “To me, it’s just a marvelous mission,” she said.

“I loved just visiting with the people. You met so many nice people, people who brought in the meals … and I’d have dinner with the guests,” she said.

Guzek has also volunteered at the Green Bay Correctional Institution with a self-help group for inmates.

“Some of those young men were going to be there forever,” she recalled. There would be free and open exchange and then group discussion. “You saw that God was everywhere. God was in those meetings. The spirit was there. I got more out of the experience certainly than I gave,” she said.

Since her mid-30s, Guzek said her favorite activity has been to “get up in the morning and I’ll go out for a walk.”

“When I walk I pray for everybody on my list,” she said. And Guzek also has conversations. “I just talk to God,” she said. “We talk a lot.”

Words to live by: “He knows you by name.”

Joyous days in our diocese

Brothers and sisters, It seems very unusual to speak of joyous days when the state and the country are dealing with a pandemic, but life goes on … Read More