NEENAH — At this time of year, children usually come to church for first Communion. Due to the coronavirus pandemic, first Communions have been delayed and children, and their families, have had to stay home and not attend Mass at church.

So instead of people coming to church for blessed bread, St. Gabriel church staff in Neenah went to people’s homes with freshly baked bread.

Meredith Lauer, youth ministry and faith formation coordinator at St. Gabriel, came up with the idea of delivering 200 loaves of bread to all the students in the parish’s faith formation classes from first through 11th grades, including confirmation students and second graders who are preparing for first Communion. 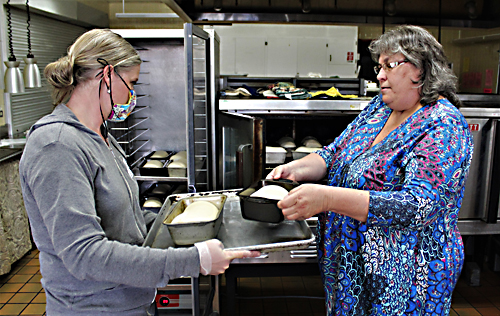 Meredith Lauer, left, youth ministry and faith formation coordinator at St. Gabriel the Archangel Parish in Neenah, holds pans of bread dough while Jennifer Schneider, director of religious education, places the pans in an oven at the church May 5. Three hundred loaves of bread were made and delivered to parishioners by Fr. Bob Kollath, pastor, and others. (Brad Birkholz | For The Compass)

“All I can say is that it was inspired by the Holy Spirit,” Lauer told The Compass. “I like bread. My kids like bread. And I thought, ‘Oh it would be such a fun thing to do.’ It’s the end of our religious education year and I thought it would be nice to be able to see them and say ‘Goodbye.’ And bread came to mind. I don’t know why.”

She approached her supervisor, Jennifer Schneider, director of religious education at St. Gabriel.

“That’s a big undertaking,” Schneider remembers first thinking. “Then I got excited about it.”

Schneider said Fr. Bob Kollath, the pastor, asked that they include some other specific individuals from the parish and, soon, the number rose to 300 loaves.

At first, Lauer thought she could make the bread in her own kitchen, but using the parish’s kitchen ? along with its proofing box to help the dough rise ? cut the prep time in half.

The dough is made and frozen at the local Festival Foods store. Lauer then bakes it up fresh. 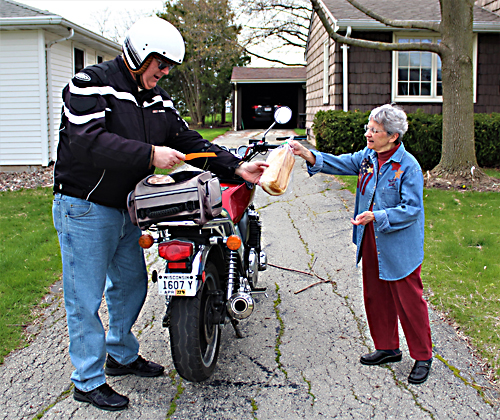 Fr. Bob Kollath, pastor of St. Gabriel the Archangel Parish in Neenah, delivers a loaf of oven-baked bread to parishioner Mary Jo Widener outside her Neenah home May 5. The bread was prepared by Meredith Lauer and Jennifer Schneider of St. Gabriel. (Brad Birkholz | For The Compass)

“I am not making the dough ? full disclosure,” she said with a laugh. “You could not buy that much yeast now if you wanted to. It’s sold out.”

The first loaves were delivered on the Monday after what would have been first Communion Sunday at the parish.

The children, Lauer said, were thrilled. “So the kids were like, ‘Oh, they brought me bread for my first Communion.’ So that was kind of sweet.”

The reactions were equally heart-warming for Schneider, along with Fr. Kollath and pastoral associate, Steve Pable, who helped make deliveries over the week.

“Because the (faith formation) year had ended so abruptly, this was a great way to reconnect with our families,” Schneider said. “I can’t tell you how many people have responded in a positive way (emails, texts, calls, Facebook). It did bring some closure for our families and for us. It was so nice to show our appreciation for our families.”

“Actually, that was really cool,” Lauer said, “because I got to go back to all the houses we went to last summer and deliver bread. That was a really fun connection. I think they were feeling the love. … That has been fun to keep up that relationship.”

Yes, everyone kept socially distant. Lauer quipped that she had to be careful not to step back too quickly and fall down front stairs after she rang doorbells because most people were so eager to talk.

“An unexpected blessing of this is that this would not work or even have the same effect if these were just normal times,” Lauer said. “In normal times, most people would be gone. Now we’re finding that everybody is home. Of 300 loaves, I think we left maybe three loaves at a front door that they didn’t answer.”

“This wasn’t just a ‘drop and go’ operation,” she said. “It gave us the opportunity to connect with our families in a way we haven’t before. To see them on their own ‘turf’ and appreciate their family structure and life, to see new puppies, to reassure our second graders that first Communion will happen, and to learn more about who we serve. That was the best part, … to visit with the kids and parents at a safe distance, of course. There were some conversations that lasted at least half an hour.”

More than loaves ended up in the bread deliveries. Another parish member, Ann Chipman, made palm crosses to go with each loaf. Since the parish was unable to give out palms on Palm Sunday, the palms had been stored in the parish refrigerator.

And the next generation got involved as well. Lauer and her husband, Mike, and their family belong to St. Margaret Mary Parish, also in Neenah. Their 10-year-old daughter, Jillian, has helped her mom bake some of the bread.

“But then (Jillian) got all inspired and made a whole bunch of cookies for her friends,” Lauer said. “Then I drove her around so she could deliver them. I was so impressed.”

The cost for the first 200 loaves was covered by a donation, and the parish has covered the rest.

Will there be more? Lauer said she has left that to the parish council, but told them, “I’ll make bread until I don’t have any names left to bake bread for.”