ALLOUEZ — Capuchin Fr. Jim Leary, pastor of St. Joseph Parish in Appleton, is celebrating his 50th anniversary of ordination this year. While he’s honored to be recognized for his five decades of priestly ministry, Fr. Leary said his focus is helping his parish recover from the COVID-19 pandemic. 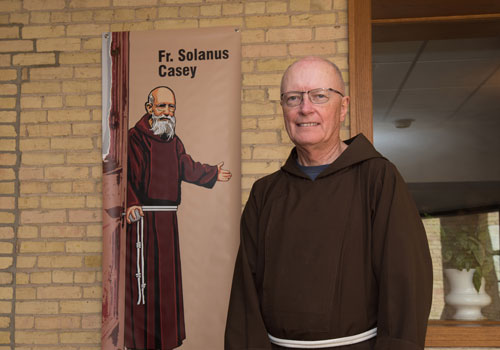 Capuchin Fr. Jim Leary, pastor of St. Joseph Parish in Appleton, will celebrate the 50th anniversary of his ordination in September.  (Sam Lucero | The Compass)

“I have no other plans than to continue to cope with this coronavirus and what it has done to the overall presence of parishioners,” he said. “As you know, we’ve lost contact with them on a regular basis. So that will be the challenge if and when this (virus) is conquered. Will we be able to bring back people who have gathered here in great numbers?”

The Capuchins at St. Lawrence “had a profound effect on me,” said Fr. Leary. “They were good teachers and good men. That’s probably the simplest answer” as to why he entered the religious community.

Following four years of study at the House of Philosophy in Crown Point, Ind., Fr. Leary studied theology for four years at the Capuchin House of Studies at St. Anthony Friary in Marathon, Wis. He was ordained to the priesthood on Sept. 3, 1970, at St. Lawrence Seminary.

“My initial job was recruiting for St. Lawrence Seminary,” he said. He also worked for six years as director of the Capuchin Soup Kitchen in Detroit. Most of his ministry, however, has been as a pastor. He has also served at parishes in Detroit; St. Paul, Minn.; Billings, Mont.; and Sparta, Wis.

As pastor of St. Patrick Parish in Sparta, where he served for 11 years until moving to Appleton, Fr. Leary led a $2 million fundraising and construction project for a new parish school.

Fr. Leary said his 10 years at St. Joseph Parish have been filled with important milestones. “It’s a really solid parish with a long history,” he said. “We celebrated the parish’s 150th anniversary (in 2017) and that was a privilege to plan and be a part of that historic celebration.”

Another historic event was observing the Nov. 18, 2017 beatification of Blessed Solanus Casey, a Capuchin priest who celebrated his first Mass at St. Joseph Parish. “Those are two great moments,” said Fr. Leary.

“I have been so impressed by the generosity of the parish, in terms of meeting its responsibilities,” he said. “We’ve been one of the significant supporters of the St. Francis Xavier School System (and) and we are well known as being a socially conscious parish.”

St. Joseph Parish supports ministries such as St. Joseph Food Pantry, Leaven, Pillars homeless shelter and Habitat for Humanity. Knowing that the parish, which has been served by the Capuchin order since 1877, has a strong social ministry outreach, just like the Capuchins, is a bonus, said Fr. Leary.

“It’s a reflection of the spirit of the Capuchin order, which is well known for being advocates of the poor,” he said.