Fr. Getchel steps down from active ministry after 44 years of service

GREEN BAY — Fr. Richard Getchel said that one thing has never changed since the day he was ordained a priest on June 5, 1976: “Providing Eucharist and the sacraments has been a priority since day one and continues to be today.” 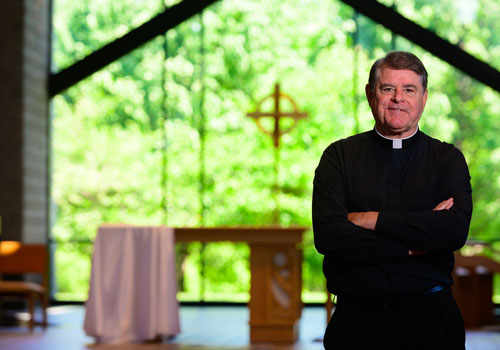 Fr. Richard Getchel is pictured near the sanctuary of St. Mary Church in De Pere, where he has served as pastor, along with St. Francis Xavier Parish, since 2011. Ordained in 1976, Fr. Getchel will be granted senior priest status on June 30. (Sam Lucero | The Compass)

Fr. Getchel, pastor at St. Mary and St. Francis Xavier parishes in De Pere will retire from those assignments Aug. 2. He will be granted senior priest status on June 30.

This Oshkosh native credits his vocation to the guidance of priests at his home parish of St. Vincent de Paul in Oshkosh (now part of St. Jude Parish).

“What I appreciated at St. Vincent de Paul Parish was a good relationship with Msgr. Louis Schorn at that time,” Fr. Getchel said, “as well as with Fr. Gregory Landreman. I worked quite a bit with him as I was president of the Catholic Youth Organization at the parish.”

Fr. Getchel was also involved with Cor (Christ in Others) weekends when he attended Lourdes Academy and credits a School Sister of Notre Dame, Sr. Mary Walter, at the parish school as also being supportive of his call to priesthood. He wanted to enter seminary after eighth grade, but his parents asked him to wait until after high school.

He attended St. Norbert College in De Pere, where he earned a baccalaureate degree in religious studies and then entered seminary at Saint John’s University in Collegeville, Minn.

He was ordained on June 5, 1976, at his home parish by Auxiliary Bishop Mark Schmitt.

“We were the last ordination class that was given the opportunity of being ordained in our home parishes,” Fr. Getchel told The Compass. “Bishop (Aloysius) Wycislo then held the ordinations for priesthood the following year at (St. Francis Xavier) Cathedral.”

After ordination, Fr. Getchel was assigned as associate pastor at St. Matthew Parish in Allouez. But he also received another assignment: Holy Name Retreat House which was then located on Chambers Island in Door County. (The retreat house was closed in 2014.)

“I never thought I would have the opportunity, in my first year of priesthood, of being named the director of Holy Name Retreat House,” Fr. Getchel said. “But Bishop Wycislo named me and I was in that role for four years and also the associate pastor at St. Matthew Parish in Allouez at the same time.”

The retreat house offered men’s, women’s, couples, priest and seminarian retreats each year. And the priest remembers that many retreatants returned annually. At each retreat’s closing Mass, he would give each person a card showing how many years they had been coming to the island.

“They were proud of their record,” Fr. Getchel said.

While still at the retreat house, he was also assigned to the diocesan Marriage Tribunal. That work eventually led him to post-graduate studies and a canon law degree from St. Thomas University in Rome in 1982.

After completing studies in Rome, he worked full-time for the Marriage Tribunal where he served as both Defender of the Bond and as a judge.

While full-time work at the tribunal ended when he was appointed pastor of St. Agnes Parish in Green Bay in 1990, Fr. Getchel has continued to work with the tribunal. He has also served on the inter-diocesan Marriage Tribunal that serves the five dioceses of Wisconsin and as a synodal judge for marriage cases from the Archdiocese of Milwaukee. He still assists Fr. Brian Belongia, the current director of the Marriage Tribunal in Green Bay. 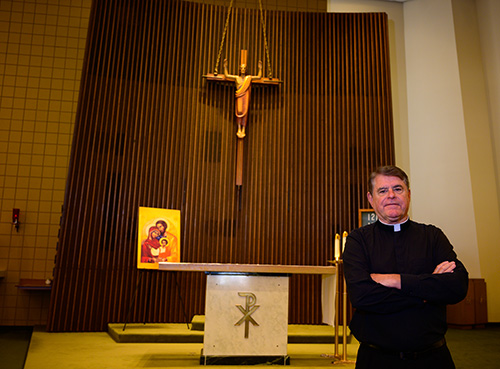 Fr. Richard Getchel said one of the joys of being a pastor with a Catholic school is seeing school children grow up and start families of their own. “It has been wonderful to witness the marriages of those that I first met while they were in grade school,” he said. He retires from active ministry on Aug. 2. (Sam Lucero | The Compass)

Fr. Getchel served at St. Agnes from 1990 to 2011, when he was appointed to his current parishes. Both St. Agnes and St. Mary and St. Francis have schools connected with them (Holy Family and Notre Dame). He says that having a school with his assignments has been important to him. Especially now that he has seen many students grow up and start families of their own.

“It has been wonderful to witness the marriages of those that I first met while they were in grade school,” Fr. Getchel said. He has also served as confirmation sponsor for some former students and baptized the children of others.

While Fr. Getchel always wanted to be a priest, he also had an interest in law enforcement and even wanted to be an FBI agent. He sent an application to the bureau, but was turned down because he didn’t have a degree in sociology, law or business. His rejection letter was signed by then-FBI chief J. Edgar Hoover.

Even though the FBI turned him down, Fr. Getchel has served law enforcement as a chaplain for the Green Bay Police Department for 35 years.

In his spare time, Fr. Getchel enjoys Italian cooking and framing pictures. He is considering more framing once he retires, as well as traveling with his sister and her husband, Diane and Bill Cassels. “I would be up for that since I have never done that,” he said.

Normally, when a pastor retires, his parish hosts a farewell celebration. With the COVID-19 pandemic, that isn’t possible now, but Fr. Getchel says that will happen “after I have concluded the assignment. Several months away, when our churches can return to normal.”

After reflecting on the question of what has been the most challenging — and the most rewarding — about being a priest, Fr. Getchel said, “Going into new situations and new assignments knowing I was leaving a very good assignment. I have been very blessed in always having an enjoyable and rewarding assignment.”

The power of personal stories in healing racism, division