GREEN BAY — Like many parish communities, in response to COVID-19, the Quad Parishes on the west side of Green Bay — Annunciation, St. Joseph, St. Jude and St. Patrick — sought to provide online faith opportunities and services. During discussion about offerings, Deacon Jerry Coenen pointed to an age group that needed to be included.

“We had novenas and other things for adults, but no one was doing anything for the children,” he said. “They are cooped up at home, too. I think it would be nice for them to hear some stories — Bible stories and stories about different moral issues.”

“Story Time with Deacon Jerry” was launched on the Quad Parishes website (quad-parish.org) and facebook.com/thequadparishes on May 5. Deacon Coenen shared the creation story from Genesis with young viewers during the first installment. He also read “Before I Was Me,” a book written by his close friend, Frank Fraser. 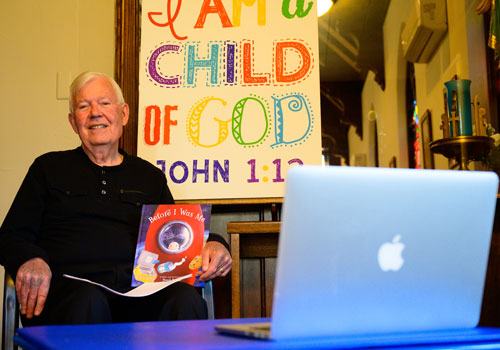 Deacon Jerry Coenen prepares to record one of his “Story Time with Deacon Jerry” videos from Annunciation Church in Green Bay on June 11. Deacon Coenen, who serves the Quad Parishes on the west side of Green Bay, saw a need for parishes to reach out to children during the COVID-19 pandemic. (Sam Lucero | The Compass)

“(The book) is about a child who is ready to be born and he’s thinking about all the things he could be,” explained Deacon Coenen. “He goes through the different things in his life. It was (Fraser’s) first book. He’s an artist and then became a writer. I talked to the kids about how I met him.”

Deacon Coenen met Fraser, who worked for Disney, when he was serving at a parish in Malibu, Cal. Deacon Coenen’s wife, Gloria, formerly worked for Michael Eisner, former Disney CEO.

“When we moved to Texas, (Fraser) happened to move to Texas, so he attended the parish I was at and did a lot of good things for me and other people,” said Deacon Coenen. “I was having healing services at the church and I wanted a picture of Jesus and a woman staring at each other. He painted this beautiful picture.”

Deacon Coenen said that his passion for helping children grew while serving at the inner-city parish in Houston. He recalls a poignant moment during a religion class for children.

“One of the kids kept staring at the candy dish I brought, so I said to her at the break, ‘Would you like some?’” he explained. “She put the bowl in her lap and ate the entire bowl. I asked her, ‘When was the last time you ate?’ She said, ‘Three days ago.’”

The child no longer ate at school during the summer months, so she was without food.

“Something had to be done,” said Deacon Coenen. “We ended up getting a food distribution at the church during the summer months when school was out. Whatever I can do to make it better for children, including telling stories, I want to do that.”

“Jesus in the Storm” and “The Golden Rule” and “Moses” have also served as story time topics. Deacon Coenen keeps his audience in mind when preparing materials and finds free online resources.

“I try to make it for the kids,” he said. “For the burning bush, I told them, ‘When you dad makes a fire with paper, the paper burns up. It’s gone. In this instance, the paper didn’t burn, the bush didn’t burn.”

“(Story time) seems to be really well received by the kids,” said Jennifer Poehlmann, liturgical coordinator for the Quad Parishes. “The families are looking forward to it. It really bridges the ages, the topics he talks about. I think everybody learns something listening to him telling the stories.”

Poehlmann records and posts the episodes. Recording mishaps have been limited, she said.

“There was one time when he thought we hit record, but actually we took a photo instead,” said Poehlmann. ‘We had a good laugh when we realized what happened.
“It’s so joyful to work with Deacon Jerry and be a part of this,” she added.

Deacon Coenen plans to continue story time. Children have shared positive comments.
“Some of the kids have said that they enjoyed it,” he said. “I started naming some of them, if I would get a little note from them, on the air.”

“We post it so people can watch on their own time,” said Poehlmann. “We were looking for content for your younger viewers and it fits really well. He is bringing Bible stories to a level that kids are able to tune into really easily. He talks about the moral of the stories and little lessons, and how they can be applied to life.”