FREEDOM — In April 2019, St. Nicholas School competed in the VEX Robotics World Championships that took place in Louisville, Ky., and took home second place. This year the school was looking to return to Louisville in April. 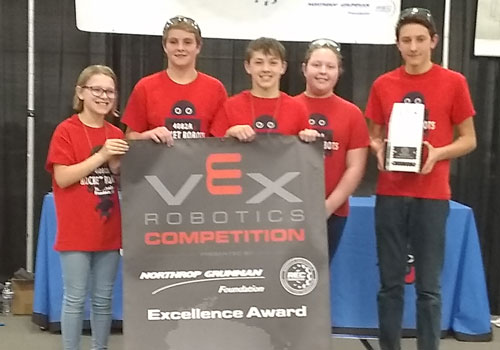 The COVID-19 pandemic forced cancellation of the annual world championships.

Wolf has served as robotics coach since 2015 and another parent, Ed Krejcie, coaches the middle school team with Wolf. Other parents have roles in assisting with organization and the software programming side, he said.

After winning the 2020 state robotics championships, Wolf said the middle school team was eager to continue its performance at national and world competitions. However, both of those events were canceled.

The disappointment of not competing for the world championship was followed by elation once it was announced the VEX World virtual competition would be held on April 25.

“The world championship tourney was done this year using a computer algorithm they developed, which used available match data for each team that earned a spot” at the world tournament, explained Wolf. “The ‘competition’ was run in the same manner as if it had been real, except they used the data to predict a winner of each of 11 qualifying rounds, then the bracketed championship rounds.”

VEX Robotics consists of about 30,000 teams from 60 nations, said Wolf. “Last year I think I heard 40 nations had teams at (the world championships) in Kentucky,” he said. “There are different age-appropriate versions of the program. We compete in VEX VRC, sometimes called EDR, which is primarily a high school level event, but it is available to middle school teams.”

The St. Nicholas Middle School Robotics Team made it to the virtual world championship this year, competing against a team from China, and won.