ALLOUEZ — Deacon Kevin Ripley began Saturday, May 30, with a “Fit Shepherds” workout with Fr. Zach Weber in Antigo. He should have been preparing for his priestly ordination, but the COVID-19 pandemic hit. 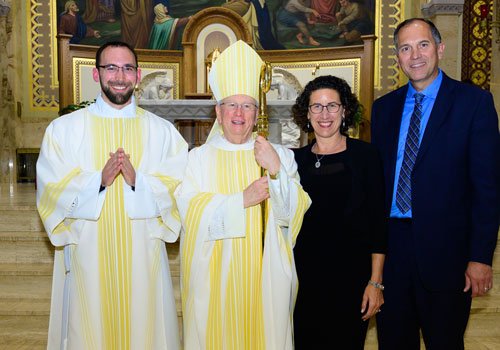 Deacon Kevin Ripley is pictured with his parents, Rick and Cathy Ripley, and Bishop David Ricken following his ordination to the transitional diaconate at St. Francis Xavier Cathedral in 2019. (Sam Lucero | The Compass)

Instead, Deacon Ripley found other projects to fill the day, like assisting at the building site of his brother Kyle’s family house, and helping his father with a staining project in Fish Creek.

“The day was fine. It was just different,” said Deacon Ripley. “At that point, I already had my (rescheduled) ordination date, but it still made me think. The next day I assisted at Mass with Fr. Tom Farrell (pastor of Stella Maris Parish, Northern Door County), so that was good.”

Deacon Ripley will be ordained to the priesthood by Bishop David Ricken on Friday, July 10, at St. Francis Xavier Cathedral in Green Bay. The day before, he will serve as deacon at the ordination Mass for Deacon Ben Johnson.

Participating in a Bible study while a student at the University of Wisconsin-Madison started Deacon Ripley on his discernment journey to the priesthood. Through involvement in campus ministry, he became more engaged in his faith, developed a deeper prayer life and became open to a priestly vocation. He applied for seminary during spring break of his senior year.

Deacon Ripley attended Mundelein Seminary at the University of St. Mary of the Lake in Mundelein, Ill.

“It doesn’t seem like six years (of seminary) have gone by,” he said. “I think I saw it more as a mission than something I had to do.”

In addition to his studies at Mundelein, formation opportunities for Deacon Ripley included an internship during his theology II year at Holy Family Parish, Marinette. Last summer, following his ordination to the diaconate, Deacon Ripley served at St. Mary Parish, Greenville.

“It was a good experience with Fr. Michael Warden,” he explained. “I didn’t get to preach a whole lot on weekends, but I preached every Tuesday at evening Mass. That was a good opportunity to have that regular crowd. I was also able to preach for a ‘Love Begins Here’ Mass in Waupaca and for a Totus Tuus Mass for the kids in Greenville. It’s always nice to preach for the students.

“Right away, I did a baptism,” he added. “The night before Fr. Warden asked me. That was a beautiful opportunity. I baptized two babies. (The summer) went by very fast. There was never a lack of things to do as a deacon. I learned a lot from Fr. Warden, his way of life, the way he prays.”

Deacon Ripley, the son of Rick and Cathy Ripley, traveled to Peru at the end of August for a mini-mission trip. He had been there with his class from Mundelein years earlier.

“I made my own trip,” he said. “They welcomed me to come to a parish in Piura, a desert city. It’s very poor. I was able to use my Spanish. I helped with liturgies, did a baptism there, brought Communion to the homebound and blessed homes.”

A return to seminary for the fall semester also marked a return to Ascension Parish in Oak Park, Ill., where Deacon Ripley served for the last three years.

“They were very generous to include me in a lot of things,” he said. “I tried to say ‘yes’ as much as I could, being an hour away from the parish at seminary. Everything is an hour away in Chicago.”

“During the first class, one of us had to sit down in front of our professor and do a mock confession. I didn’t volunteer,” said Deacon Ripley with a laugh. “I eventually volunteered. It really started to get real.

“I look forward to doing confessions,” he added. “I hear so much about what a grace it is to be entrusted in people’s lives in that way, but more importantly to bring God’s mercy and healing power to their souls.”

The spring semester moved to online classes on March 13 when Mundelein shut down. Deacon Ripley looks forward to November when his class will gather together for a Mass for the newly ordained at the seminary.

“Fr. Patrick has been a part of our family so long that it just makes sense,” said Deacon Ripley. “(Assumption Church) is a great symbol of faith for the community.”

The newly ordained Fr. Ripley will celebrate a Mass of Thanksgiving at Assumption on Saturday, July 11. Attendance will be limited to 25%, so the target is family and friends, he said. He also hopes to eventually celebrate Masses in Greenville and Marinette. He recently served as deacon at Mass at Holy Cross Church, Bay Settlement. Deacon Ripley’s great-great uncle, Fr. Edward Le Mieux, celebrated his first Mass at Holy Cross on June 12, 1920.

Two weeks following ordination, he will serve as the celebrant at a cousin’s wedding.

“I always saw the role of the priest in the wedding as very powerful,” said Deacon Ripley. “I look forward to when the whole community is gathered. It is not going to look the same as I pictured it, but eventually it will.”

Deacon Ripley has been appointed to serve as parochial vicar at St. Raphael the Archangel Parish, Oshkosh, with Fr. Tom Long, pastor. He will also celebrate Masses at St. Mary Church in Winneconne and St. Mary Church in Omro and serve as chaplain at Lourdes Academy in Oshkosh.

The bodies of water in the Oshkosh area appeal to Deacon Ripley, who was on the rowing team in college and able to row on the Sea of Galilee during a seminary trip to the Holy Land. He plans to get a used boat to continue rowing for exercise.

“It’s exciting to go to Oshkosh, a new city for me,” he said. “I haven’t spent much time there. It seems to be a vibrant faith community.”