Yvonne Podner now finds ways to give back to Florence parish

FLORENCE — For decades, Yvonne Podner had not gone to any church. But now, being away from Mass and her fellow parishioners because of the coronavirus has created a longing that she finds difficult to bear.

Podner, 80, explains that she had been baptized Catholic as a child but had no religious training. After her marriage to Don Podner in 1960 at St. Mary Church in Florence, the couple didn’t make faith a priority. Still, when he died in 2014, Don was buried at the church of his childhood and Yvonne took the first step back to the faith. 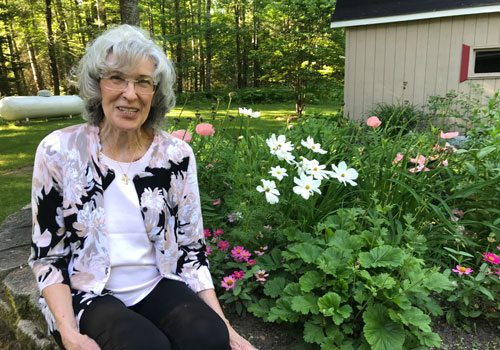 “My husband had dementia for seven years. After he passed away, I was totally lost,” she said. “A year after he died, I don’t know why, but I received a newsletter in the mail from St. Mary’s. I didn’t belong to the church, so I was very curious why I got it and sat down to read it.”

Podner read about a grief support group at St. Mary and asked her daughter if she should go. “She said, ‘Yes, it’s a good thing,’’’ Podner said. It turned out that she was the only one to sign up for the group, facilitated by then pastoral leader Christine Gall. But Podner was on her way to finding relief from her grief and finding her way back to the Catholic Church. “She was so helpful,” she said of Gall. “I credit her with my healing,”

Through Gall, Podner enrolled in RCIA (Rite of Christian Initiation of Adults) and soon was receiving an education about her faith that she never experienced as a child. Less than a year later, she was confirmed at the age of 75 and became a member of what is now called Immaculate Conception — St. Mary Catholic Community.

“Confirmation gave me a really strong sense of belonging. I needed to belong somewhere and to somebody. I now belong to somebody who is with me every day,” she said of her cherished relationship to Jesus.

Podner also began attending daily Mass at the other two parishes also pastored by Fr. Timothy Brandt: St. Joan of Arc in Goodman and St. Stanislaus Kostka in Armstrong Creek. Unfortunately, all of that stopped in March because of the pandemic.

“The hardest part is not going to Mass. I miss the connection with the people,” she said.

The coronavirus also interrupted the Alpha class facilitated by Fr. Brandt, which she attended. “I now have a spiritual life that I didn’t have before,” she said. “I read Scripture daily and pray.”

Podner has found extraordinary ways to give back to her faith community. In the past year, she made three sets of vestments for Fr. Brandt, one for each parish site, in five colors to fit the liturgical seasons.

“Being a big guy and being that I do get warm under all the layers of clothing for weekend Masses, her lightweight vestments have been a true godsend to our parish communities and to myself personally,” Fr. Brandt said.

In addition to the vestments, Podner knits white blankets for babies when they’re baptized and prayer shawls for people who are grieving. She decorates the parish gathering spaces for all the seasons of the church and, most recently, has sewn almost 300 face masks and given them to a nursing home, school and hospital, as well as to family members and neighbors.

In addition to her son, Steven, and his family — who live nearby and check on her often — her link to the outside world is her cell phone. She doesn’t have a computer, so she watches the Mass on her phone. “Fr. Timothy’s homilies are so touching to me. Sometimes, he hits me right in the heart,” she said.

She also uses her phone to communicate with her daughter, Julie, in Minnesota, and her friends, including Dawn Hansen of Tigerton, Fr. Timothy’s mother. The priest introduced the women because he said he knew they’d be fast friends.

“When I first met Yvonne, it was like I had met my mother 10 or 15 years into the future — she looked so much like her. And as I got to know her more, I saw how she and my mother share a similar love for quilting, gardening and other hobbies,” Fr. Brandt said.

Podner agrees that making a connection can help people in any number of ways. She began knitting and sewing for the local parish even before joining it. Her advice to Catholics seeking to bring others to Christ is to find that common ground, “something that they’re interested in.”

So now she waits impatiently for the number of COVID-19 cases to decline in northern Wisconsin so she can practice her faith fully. She finds wisdom in the words of her pastor. “Fr. Timothy knows how afraid I am of the virus. He told me to stay home,’’ she remembered. “He said, ‘When you feel safe, you’ll be back.’”

Joyous days in our diocese

Brothers and sisters, It seems very unusual to speak of joyous days when the state and the country are dealing with a pandemic, but life goes on … Read More