Miscarriages led Everts to draw on faith, co-author book to help other parents

GREEN BAY — Cassie Everts remembers the day in 2011 when she mourned in silence after experiencing her third miscarriage. “I remember sitting at Mass at the Easter Vigil and the priest gave this beautiful homily on how, after every Good Friday — no matter what we are going through in our life — we have Easter Sunday,” she said.

His words left her wondering about her own life. 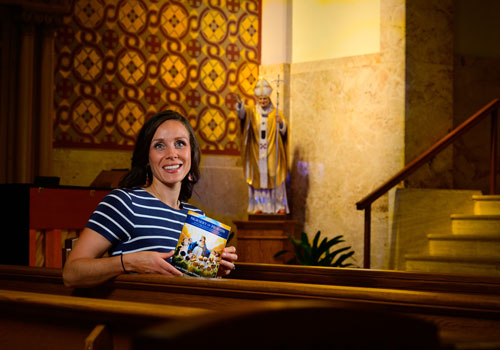 “I just remember gripping my husband’s hand and thinking, ‘Will we ever see our Easter Sunday? Will we ever have that joy?’” she said. “I just felt like my life is Good Friday after Good Friday.”

Everts and her husband, Aaron, suffered through five “Good Fridays,” losing five children by miscarriage. Each loss caused her to wonder where God was in her life, she said, yet the torment eventually gave way to healing. It also led Everts to co-author a book with Patrick O’Hearn, “Nursery of Heaven: Miscarriage, Stillbirth and Infant Loss in the Lives of the Saints and Today’s Parents” (Contemplative Heart Press, 2019).

“It is much more than a book,” Everts told The Compass, adding that it is also “a companion for those grieving, as the process can often be so lonely and isolating.” It includes stories of saints and everyday Catholics who have lost babies, and it includes prayers and blessings for pastors, families and friends to help couples who have lost a child.

Cassie and Aaron met in 2006, while both worked at Relevant Radio, and were married in 2007. Cassie served for eight years as producer for the Drew Mariani Show. Aaron still works there as a database manager.

Everts remembers her first pregnancy and then learning she had miscarried. “I was 12 weeks along, and (miscarriage) had never crossed my mind,” she said. “Miscarriage was a word I had heard, but I felt it was a thing in the past.”

It was Dec. 23 and she and Aaron were visiting her parents for Christmas. “I started having some of the symptoms of miscarriage and then I came to the realization that this was really happening,” she said. “I had to be rushed to the ER and I just begged God, please let them find a heartbeat and they didn’t.

“The devastation that overtook me and my husband was just beyond any other,” Everts recalled. “We had no idea that this was a possibility. The reality that we were now living in, that I once was pregnant and now we are not — where do you go from here? It was a struggle and I had nowhere to turn to.”

After miscarrying Francis, the Everts sought medical help through NaPro (Natural Procreative) Technology and the Pope VI Institute, which was founded by Dr. Thomas Hilgers. “Everything is very much in line with Catholic teaching,” said Everts.

She underwent surgical procedures and felt confident that their next baby, Simon, would be delivered. “I thought, ‘OK, everything is fixed. This isn’t going to happen again.’ So I ended up miscarrying again.”

After losing Simon, Everts struggled with the idea of trying to conceive again. “It took me a long time to find some kind of healing, where I was comfortable enough to become pregnant again, and to just allow myself to heal first emotionally,” she said.

Dr. Hillgers then called Everts to offer his sympathy. “He said, ‘I’m sorry there is nothing more I can do,’” she recalled. “As a woman, you have this dream of seeing your belly grow … and picking baby clothes. It was another moment that really brought me to my knees and cry out to God, ‘Where are you?’ It just seemed like there was silence.’”

After a lot of prayer, the Everts decided to adopt. “That’s a whole other discernment, because that’s not where the Holy Spirit leads everybody,” she said. “And then it was discerning whether to adopt here or internationally.”

They decided to adopt two boys from Ghana, which happened in January 2015. However, while in the adoption process, the Everts lost their fifth child, Gabriel.

“As soon as (Kolbe) could speak English, he started praying for a baby sister,” said Everts. “He had no idea what our situation was. One day I sat down with him and said, ‘God hears our prayers, maybe we will adopt a baby sister like we adopted you guys.’”

In May of 2015, Everts learned she was pregnant again. She said she did not want to tell her sons because of her previous miscarriages. However, in January 2016, she gave birth to Grace, the girl Kolbe had prayed for. Twenty months later, she gave birth to her son Caden and last October she gave birth to another daughter, Briella.

“We went from no kids in almost eight years to five kids in less than four years,” said Everts. “The thing is, after we adopted our sons, we haven’t miscarried since; not to say that won’t happen again, but those three babies I had biologically there were no issues.”

Through all the struggles and victories, the highs and lows, Everts said she learned that God is always there.

“Not everybody’s story is going to end like ours, but I think the message I want to give women who are grieving is that, in the moment of your grief and your isolation and your sorrow, God is present and working on your heart,” she said. “He’s there in the silence and he’s preparing you for something. Sometimes we may not recognize what it is on this side of the veil. It might not be until our time on earth is done that we can see why things happen … but we can never lose that hope that God is faithful and he’s a God who will keep his promises and bring you out of your grief and sorrow.”

Just as she wondered when her Good Friday would end, Everts’ message is to not lose hope.

“Just believe that God has something for you, even in your grief,” she said. “He has that Easter Sunday that will come.”