More than offering inspiration to prayer, the statue of Mary holding the Child Jesus may also offer physical protection. That, at least, is the view of Jeff Koss, on whose property the small statue stands. 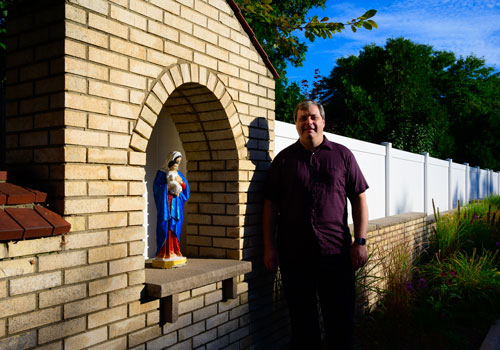 Jeff Koss stands next to the statue of “Our Lady of Webster Avenue,” which is located in a niche along a brick fence on Webster Avenue in De Pere. The statue, repainted by Franciscan Sr. Caritas Marie Le Claire, is actually the second one to take residence there. The first statue was stolen. (Sam Lucero | The Compass)

“It was late one evening (11 p.m. or midnight),” said Koss, a member of Resurrection Parish in Allouez. “A young lady had fallen asleep traveling south on Webster Avenue. Jumping the curb, she slightly woke up and over-compensated the vehicle, slamming into the wall. That night, I believe that Our Lady of Webster Avenue protected (her). Had the wall not been there and had she not slammed into that wall, her vehicle would have broken through our fence driving into our backyard. Because of the speed and direction she was traveling, she would have ended up flipping the vehicle, landing upside down in the bottom of our pool.”

The present statue is the second that has stood in a niche in the cream-colored brick wall, not far south of St. Norbert Abbey, over the last seven or eight years. The first appeared one night when the property belonged to the owner before the Koss family.

“A story of some providence is involved,” Fr. Daniel Schuster, administrator at Holy Trinity Parish, Casco, and Immaculate Conception Parish in Luxemburg, explained. “I always insisted that something belonged in that niche and it seemed like somebody was listening.”

At the time, Fr. Schuster was vocation director for the Diocese of Green Bay and lived at Xavier Formation House in De Pere, a residence for seminarians. His observations about the need for a statue did not go unnoticed. 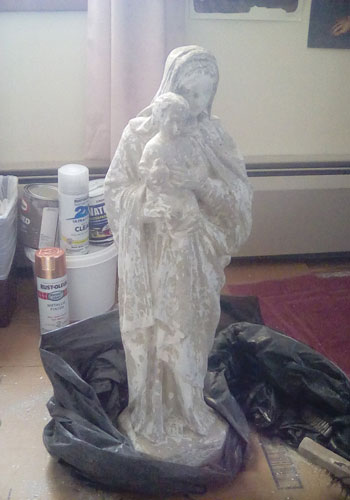 Fr. Adam Bradley was a seminarian at Xavier House. He heard Fr. Schuster mention the need for a statue several times. He happened to have a statue of Mary he had purchased at a rummage sale. Since he had taken some iconography classes, he painted that Our Lady of Grace statue.

“So Fr. Mark Mleziva — we were both in seminary — drove (to the brick wall) one night,” Fr. Bradley told The Compass, “lugged (the statue) over there as it was getting dark, put it in there, said a Hail Mary and bolted.” Fr. Bradley is now assistant vocation director for the diocese and Fr. Mleziva is vocation director.

The seminarians didn’t tell Fr. Schuster what they had done — at least not then.

“I didn’t want to know what the guys did,” Fr. Schuster told The Compass. “They were gone for a while, and they came back snickering.”

The statue remained in its new home for several months before disappearing. At first, everyone thought the property owner had removed it. That turned out to be incorrect.

During a conversation with that owner, Koss said, “we found out that, about a year before he sold the property, a statue of Mary ‘miraculously appeared’ in the grotto and stood there for a number of months until it disappeared. Unfortunately, it had been stolen sometime during the night. He had no idea how it got there and, although he was not Catholic, he was surprised by the sudden appearance of the statue. He did not mind that she stood there. His sentiment was that it added to the space.”

Others must have thought so as well — especially during an annual run in February.

“Many people took notice,” Fr. Schuster recalled. “The Seroogy Valentine Run goes past there. We would notice that people leave little tokens there at the foot of the statue. Religious objects, little signs that people were making visits to the statue.”

The priest also remembers when the statue was taken.

“There was a particular day when I was driving back from the diocese,” he said. “It was just a bad day. I was praying and talking to the Lord. I was looking for that comfort and I said, ‘At least we still have Our Lady.’ And I looked over and she was gone. … We were devastated.”

There was talk about finding another statue and a temporary one was placed for the next Valentine Run. But there was hesitancy as well.

“When we purchased the property, it had always been our intention to put something, possibly another statue of Our Lady, back in the grotto,” Koss said. “However, having learned that the previous statue had disappeared, we were very hesitant to put anything in its place for fear that whatever was put there would disappear.”

He talked with Fr. Schuster and they agreed that another statue “might show up some day.”

“Each time Fr. Schuster saw my wife or me, he would ask us if we found a new ‘Our Lady of Webster Avenue’ statue to adorn the spot,” Koss said. “And each time, we would say, ‘No, Father, but if you find one, especially a “fixer upper” let us know.’”

About two years ago, on his birthday (Sept. 15), Koss got another call from Fr. Schuster.

“He said, ‘Hey Jeff, I left something on your front porch for you. She’s in tough shape, a fixer upper. She’ll need a coat of paint. Fix her up and put her back in the grotto.’”

At the time, Koss was operations manager at the National Shrine of Our Lady of Good Help in Champion. He took the statue, covered in white paint, to Sr. Caritas Marie Le Claire, a Manitowoc Franciscan who volunteers there and who is an artist.

“It took some time to scrape all the white paint off,” Sr. Caritas Marie said. “I enjoy trying to make something that is old look new again,” she told The Compass. “It was fun to do. The statue started to crumble in certain areas like baby Jesus’ face, which I wish I could have built up at that time, because the more statues I do, the better I get at it …”

Koss had the statue blessed by Fr. John Broussard, a Father of Mercy and rector at the shrine, and put it in the wall grotto.

Fr. Bradley has seen the statue — a Queen of Heaven representation — there and calls it “beautiful.”

Apparently, it also caught other eyes. This July, Koss found it moved from the niche to the street.

“Yeah, they put her in the center median,” Koss said, posting a photo on his Facebook page. “It was a nice thought, and she probably deserves that spot; however, with everything going on lately, I envisioned her being run over in some sort of riot!”

He reflected that the statue might actually have been safer in the street than in her niche, since the brick wall has been driven into twice in three years.

“It’s probably not going to take another hit,” Koss said. “I wish people would slow down. The wall has been there for over 45 years.”

“We’ve had people stop on their walk and pray in front of her and even leave things by her too,” Koss added.

One of the most unique items was a shot glass. “We believe that the person either was asking for her intercession,” Koss said, “or thanking her for help in overcoming an alcohol abuse problem.”