‘Working in ministry for the diocese has been a gift,’ says Phernetton

ALLOUEZ — Ted Phernetton, director of Catholic Charities for the Diocese of Green Bay since 2011, has resigned from his position effective Aug. 14 to serve as director of the Waupaca County Department of Health and Human Services. 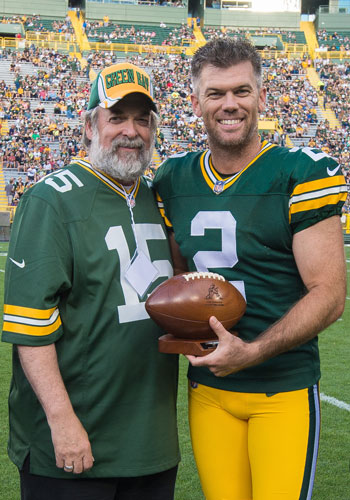 Phernetton returns to the position he held prior to his appointment at Catholic Charities.

“I worked as the director of the Waupaca County Department of Health and Human Services for three years. I would not have left the position had it not been for the opportunity to serve the church in the ministry of Catholic Charities and to serve our bishop,” he told The Compass Aug. 3.

Phernetton said he had been helping the Waupaca County agency out and was asked to return.

“A month or so after the COVID-19 pandemic began, Waupaca County lost their Department of Health and Human Services director and deputy director on the same day,” he said. At the same time, the Diocese of Green Bay began restructuring its hours of operation and instituting work-from-home policies.

“I felt that it would help (Waupaca County) if there was someone (their) staff could turn to if needed,” added Phernetton. “When asked to help out permanently in Waupaca, it took considerable discernment to arrive at the point of saying yes.”

He believes the timing of these events was not a coincidence. “The Holy Spirit works in mysterious ways,” added Phernetton. “It really was and is a call to the next chapter.”

Fr. John Girotti, who serves as the Catholic Charities and Living Justice mission team leader and vicar for canonical services, said Phernetton “worked tirelessly to guide and strengthen Catholic Charities” over the past eight years.

“He deepened our identity as a ministry of the church and stabilized our finances. He advocated for those we serve, as well as for all of us who provide these services. And his calming presence was a blessing for all,” added Fr. Girotti.

Phernetton said working for Catholic Charities was “a call to ministry.”

“Working in ministry for the diocese has been a gift these last eight and three-quarter years,” he said. “The staff that makes up Catholic Charities and the Curia is a wonderful, talented and mission-driven group of people. Serving Bishop (David) Ricken has been something that has been a true pleasure. Sometimes I think we tend to put a bishop on a pedestal … but, working alongside Bishop Ricken truly is like working alongside your brother. His presence provides a sense of comfort and genuine caring that is not put on as a facade. His humble nature and spiritual presence has certainly brought me closer to Jesus Christ.”

Phernetton added that the most enjoyable part of working at Catholic Charities “is the ability to talk about why we do what we do. The ability to share why we serve, the ability to fulfill our Gospel call,” he said.

According to Phernetton, his hope is that he served the church well. “I am pleased with the ability to work toward the movement of Catholic Charities becoming missionary in its service delivery, getting out into the communities and away from a desk-driven model,” he added.

Transition time and the Lord’s day

As you know, almost six months ago, our lives changed dramatically. As the reality of the pandemic hit us, we had to adjust quickly as the decision … Read More