CHAMPION — Two women professed final vows as members of the Missionaries of the Word during a liturgy held Aug. 22, the memorial of the Queenship of Mary, at the National Shrine of Our Lady of Good Help.

Sr. Maria Lucia Stella Maris and Sr. Marie Bernadette of the Sacred Heart professed their final vows with the community that is based in Baileys Harbor.

With more than one dozen priests, family and friends in attendance at the shrine chapel, the women kneeled before Bishop David Ricken and Mother Mary Catherine, superior of the religious community, and professed their vows of poverty, chastity and obedience. The ceremony was originally scheduled for March 25 at St. Francis Xavier Cathedral, but the COVID-19 pandemic forced the celebration to be postponed.

The Missionaries of the Word religious order (called a public association of the faithful, according to canon law) was established on May 1, 2014, the day Mother Mary Catherine made her final vows at St. Pius X Church in Appleton.

The formation process for Missionaries of the Word takes at least seven and a half years before final vows. “At final profession, a sister definitively and irrevocably gives herself entirely to Jesus, vowing poverty, chastity and obedience for life and is fully incorporated as a member of the community,” according to Mother Mary Catherine.

Sr. Maria Lucia told The Compass in an email that to profess final vows “is a profound gift and joy.”

“I’m deeply grateful for the church’s discernment and testing of my vocation over the past almost eight years, which has strengthened and confirmed the Lord’s call in my own heart, purifying my response to him,” she said.

“To profess final vows is such an unmerited gift of God that I will continue to unpack each day of my life,” said Sr. Bernadette. “The most exciting part of belonging to Jesus …  is his faithfulness in all things: to giving every last thing I need — graces, crosses, joys, corrections, consolations, you name it — to draw me into the ‘always more’ of himself.

“He is so good and so faithful, and to give my life to him in the profession of my final vows is one small way his love is magnified for our world to come to know and love him, too,” she added.

In his homily during Mass, Bishop Ricken told the sisters that their vocation is a gift to the church and to the world.

“Sr. Bernadette and Sr. Lucia, this is an important day for you. You began this journey in 2012 and here you are in 2020,” he said. “I would say you have been persevering and loving your vocation and being tested by your vocation and carrying the cross with Mother (Mary Catherine) of founding a new order, which is not an easy task. And so thank you for your ‘yes’ to follow Jesus and to enrich the church with the gift of your vocation as women religious, which is not easy today. It is such a counter sign to all of the trends in the world.”

The profession rite began with the sisters being called forth by name by Mother Mary Catherine. Following his homily Bishop Ricken questioned the women on their resolve to undertake “a life of perfect chastity, obedience and poverty,” to live the Gospel and to “spend your whole life in the generous service of God’s people through the charism of the Missionaries of the Word.”

After affirming their resolve, the sisters lay prostrate before the altar while the Litany of Saints, followed by Psalm 30, was prayed by the assembly. The two women then professed their vows to God while kneeling in front of Mother Mary Catherine. They then signed their vows on a card at the altar.

Bishop Ricken recited a solemn prayer of consecration for the newly professed sisters and they received a crown of red roses, “a symbol of their joyful union with Jesus crucified,” from Mother Mary Catherine. The crowning was followed by exchanging the sign of peace with their superior and Bishop Ricken.

Mother Mary Catherine told The Compass that the community has six women in various stages of formation with the order and two who are joining the community this fall.

Sr. Maria Lucia summarized the role Jesus has in the two sisters’ vocations.
“He is the one who gives me the confidence to profess vows for life, to make a commitment to continually empty myself by poverty, chastity and obedience,” she said. “It is his grace that makes these vows beautiful; it is his gaze that is so full of love, his wounds that tell me of his infinite mercy and thirst for souls that draw me to give my life totally to him.” 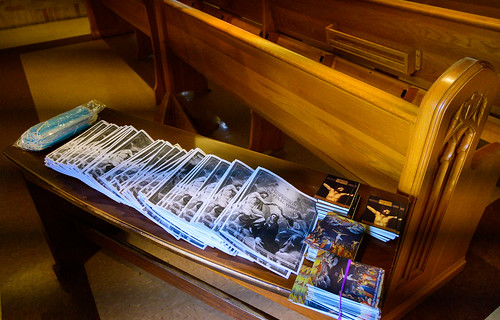