TWO RIVERS — Jim, Joe, Paul and Fran Schmitt grew up in a family of 17 and learned to sing in the church choir. The brothers skyrocketed to stardom when they won an international singing competition in 1951, putting their hometown on the map and sparking a 35-year career. 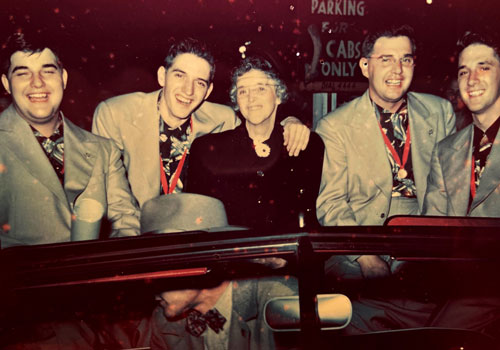 Greeted by thousands when their train rolled into the station, Two Rivers welcomed their hometown heroes: Joe, left, Jim, Fran and Paul. They led the cavalcade of cars in a convertible with their proud mother, Anna. (Submitted Photo | Special to The Compass)

They “traveled along” more than 2 million miles, “singing a song” on the country’s top stages and TV shows, including Carnegie Hall, Madison Square Garden, Ed Sullivan and Lawrence Welk. Through it all, they ran local businesses, led civic organizations and raised 35 children among the four families.

The behind-the-scenes story is even more fascinating.

Centered on Faith, Family
Their parents, Henry and Anna Schmitt, built a home on a solid Catholic foundation. With so many children, the household would have been entirely chaotic if not for the rhythm of Catholic life. The day began with Mass. Henry insisted that prayer before meals be unhurried and end, “Praise be to Jesus Christ, now and forever, Amen.” Anna held weekly rosaries for the neighborhood.

Just a short walk from home, St. Luke Church in Two Rivers was the center of their community. Henry and Anna were married there. All of their children were baptized and attended grade school there. The boys sang in the choir there. Three of their sons became priests and celebrated their first Masses there.

The Schmitts were also a “doing” family. Each person had a job. Even the little ones could collect spoons from the table or match pairs of shoes in the front hall. The older children were expected to look after their younger brothers and sisters. Everyone wanted mother and dad’s praise. They earned it by helping mother, treating each other with respect and doing a good job.

When One Door Closes …
Back in the days when the entire Mass was sung in Latin, the men’s choir at St. Luke’s earned a reputation for its soaring harmonies. It was one of the few male choirs in the Green Bay Diocese. In 1948, the choir was in such high demand for performances and weddings that the church decided to pay each of its 30 members 50¢ per practice. The acoustics were heavenly. The choir sang like angels.

Fran, Joe, Paul and Jim were all members of the choir. Another brother, Ray, played the organ. Disappointed that the choir was not available for a summer wedding, a parishioner asked Ray if his brothers could sing for the nuptials. The Schmitts were such a success that soon they were in higher demand than the choir. The director declared, “There will be but one choir in the church where I am the director.”

After consulting with their pastor, Msgr. Claude Hugo, the decision was made: the few must give in to the many. Crestfallen, the five brothers quit the choir and walked to the family home where their mother suggested they sing to soothe their wounds. She wisely advised, “When one door closes, the Lord opens another.”

A few months later, O. H. “King” Cole, father of Chordette Virginia Cole Osborn, discovered the quartet by chance when their melodies caught his ear at the Hotel Manitowoc. He invited them to join the Manitowoc barbershop chapter (now the Clipper City Chordsmen), where they met future coaches Milt Detjen and Johnny Means. Within 18 months, they mastered the challenging techniques of the uniquely American a cappella style, winning every contest on the road to the championship.

With performances routinely booked years in advance, the quartet had many adventures. For example, their debut at Carnegie Hall — where they would take the stage five times during their career — was nearly derailed by a lobster. With an appetite to match his size, Joe apologized to the audience explaining, “I didn’t know that it would take that long to prepare my second lobster.”

When they entered the Lions International Quartet Contest in New York, all of the other quartets dropped out, conceding that the Schmitt Brothers would win anyway. They sang the national anthem during the 1957 season when the Milwaukee Braves won the World Series. They cherished their two-week trip to entertain the troops in Alaska. And they never missed an opportunity to sing “That Wonderful Mother of Mine” to their mom. 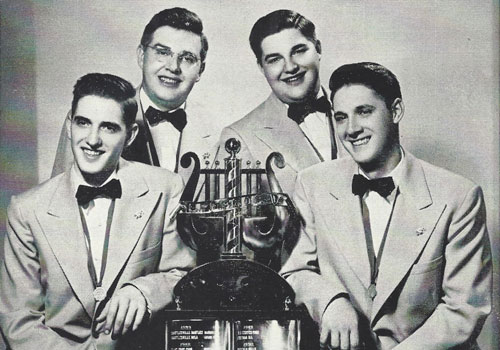 Jim, Fran, Joe and Paul Schmitt are pictured with their Society for the Preservation and Encouragement of Barber Shop Quartet Singing in America Inc. championship trophy. (Submitted photo | Special to The Compass)

If We All Said a Prayer
Of the 11 brothers in the family, three became priests: Fr. Henry, Fr. Leo and Fr. John. All served in diocesan parishes, from Chilton to Sugar Bush to Manitowoc. They were also instrumental in keeping the family in harmony. Every month the brothers met for lunch, and once each year, the priests took turns hosting the brothers’ retreat. As Fr. Henry would say, “This annual reunion of the brothers is one of pleasant associations and a renewal of brotherly affection and respect.” In other words, they would rib each other mercilessly like brothers do.

As past champions, the Schmitt Brothers performed at every annual barbershop convention. In the 1950s, Fr. Leo and Fr. John began celebrating Mass in the hotel. Soon, other barbershoppers asked to attend, and the hotel room Mass moved to the ballroom. About 900 attended the Schmitts’ barbershop Mass in 1984.

Today, the Schmitt family still counts three priests among its ranks. Fr. Carl Schmitt is the son of Jim, the quartet’s lead singer. Fr. Jerry Taddy, who celebrated his 60th jubilee this year, is a nephew of the quartet, and his nephew, Fr. Matt Foley, is a great- nephew of the quartet and serves in the Archdiocese of Chicago. In addition, a cousin, Bishop Mark Schmitt (who died in 2011), served in the Green Bay Diocese for 30 years before becoming bishop in Marquette, Mich.

“Schmitt Brothers” Book
A newly published book, “The Schmitt Brothers,” tells the behind-the-scenes story of the legendary champion quartet. Written by a great- niece and based on over 15 years of research and more than 30 interviews, the 223-page book includes 67 photos.

The book is available at Heart & Homestead and LaDeDa Books & Beans in Manitowoc, as well as the Washington House Museum in Two Rivers, which features a display dedicated to the quartet. Paperbacks and eBooks are also available on amazon.com. Follow “The Schmitt Brothers Quartet” on Facebook and listen to “The Schmitt Brothers Greatest Hits” on Apple Music and Spotify.