Even with Sunday obligation, Fr. Brandt sees livestreaming Mass as a necessity for some

ALLOUEZ — As pastor of three parishes located in three different counties, Fr. Timothy Brandt found that offering virtual Masses was a welcome service to parishioners. Now that the Diocese of Green Bay has lifted the dispensation on the Sunday Mass obligation, Fr. Brandt said virtual Masses are still a necessity for some. 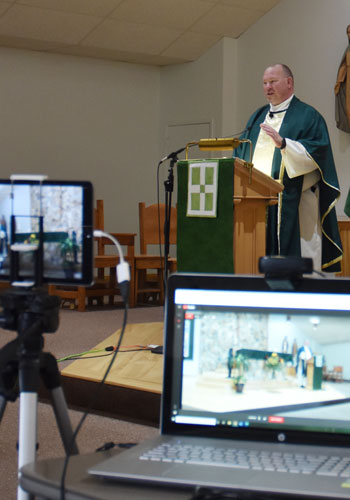 “There are still a solid number of people who are tuning in to the Masses,” said Fr. Brandt, whose parishes include Immaculate Conception in Florence (Florence County), St. Joan of Arc in Goodman (Marinette County) and St. Stanislaus in Armstrong Creek (Forest County). “When the numbers begin to dwindle or fade, and I see more people returning to Mass, then I will have to evaluate how effective of a ministry it is for us.”

In his decree on the return of the Sunday Mass obligation issued Sept. 7, Bishop David Ricken explained that under certain circumstances, the obligation does not apply.

“As has always been the case, if individual Catholics struggle with serious health concerns or are physically or morally prevented from worshipping at Mass for a grave reason, this obligation does not apply,” he wrote. “Additionally, if individuals are frail due to illness or age or, in their well-formed consciences believe that going into public places — including Sunday worship at Mass — would place their health or the health of their loved ones in serious jeopardy, they too are not bound by this obligation.”

Fr. Brandt said that for these reasons, it is essential for him to continue livestreaming Sunday Mass from Immaculate Conception Church.

“The people who have been staying away because of underlying health conditions are probably going to continue to stay away, simply because they still have the health condition,” said Fr. Brandt, “and quite frankly, there has been no good movement regarding the virus itself. Our numbers, at least in the state of Wisconsin, seem to continue to climb on a weekly basis and don’t seem to be getting any better.

“So the people with breathing concerns, age-related concerns or just any condition in general who were afraid to return to Mass before, I don’t see them returning, simply because there is no more dispensation,” he added.

Fr. Brandt explained that his first virtual Mass was actually celebrated while he was in quarantine.

“I was in Mexico for a week of vacation and returned to the United States on March 18,” he said. “A day before our return, we learned we would have to be self-quarantined for a two-week period of time, so I knew I would be spending a lot of time at home.”

Knowing he would be celebrating Mass at home, he decided he wanted to stay “spiritually connected” with his parish families.

“I figured I might as well try and livestream the Mass to Facebook for people who might want that spiritual connection,” he said. “I began by setting up a makeshift altar in my living room on the coffee table and coordinated with Joanne Leffler, our parish secretary, to get everything I might need for a couple of weeks … and just started livestreaming daily and weekend Masses from my living room every day.”

Fr. Brandt said the daily Masses “gave me a certain routine to maintain,” but he had no idea so many people would tune in.

“I noticed that more and more people were tuning in every day,” he said. “People from my current parishes in Florence, Goodman and Armstrong Creek, and also people from my previous assignments at Holy Family in Brillion and the Quad Parishes in Green Bay. Soon, people who were connected with people that I knew were ‘friending’ me on Facebook so that they too could tune into the daily or weekly Masses.”

“Since people couldn’t receive holy Communion at the time, I was reading the Act of Spiritual Communion prayer, giving them time to repeat each line after me, and the Communion Antiphon, two things that I continue to do with the Tuesday and Friday Mass livestreams still today,” he said.

The practice of celebrating a virtual Mass on Facebook took some getting used to, he said.

“One of my first learning experiences with the Masses was not to read the comments as they popped up on the screen, because it could become too distracting,” he said. “Secondly, I had to learn to turn the iPad that I used for the livestreaming around so that the image wasn’t mirrored. Some people began asking when I became left-handed and I didn’t understand why until I began to play back the videos.”

He also found that his two Labrador retrievers, one of them just over six months old, would walk in front of the camera or bark. “Even worse, they would fall asleep and start snoring,” he said. “I think people online were almost tuning in to see what the dogs were up to that given day as much as happening to catch Mass.”

“I had to work with our local internet provider up here to get a better connection speed in our office,” he said. “Over time, I also started to incorporate a YouTube livestream, for people that don’t use Facebook, and that led to even more viewers.”

During Lent, he used YouTube to create a video of the Sorrowful Mysteries of the rosary, as well as the Stations of the Cross. “These were both very well received and used by people that otherwise may not have been able to participate in these traditional Lenten devotions,” he said.

Fr. Brandt’s growing familiarity with livestreaming then led him to start a Sunday evening guitar concert from his living room, which he dubbed, “Don’t Quit Your Day Job Sundays.”

“I would sing some of my favorite songs every Sunday night while playing my guitar, mostly old country songs and bluegrass, but people loved tuning in,” he said. “This continued for 10 weeks or so, until the spring weather started getting nicer and I had less free time. … I was able to help people take their minds off the COVID mess.”

Despite the many inconveniences caused by the pandemic, Fr. Brandt said embracing technology to reach out to people has been a blessing.

“For me, livestreaming the Mass has kept me spiritually connected to a number of people, many of whom wouldn’t be part of our regular Mass schedule up here in the northwoods,” he said. “It’s been a service that I’ve been happy to be able to provide, so long as people don’t expect too much of it — meaning, no fancy graphics, camera movements and the like.”

Over the past several weeks, Fr. Brandt said he’s resumed visits to the homebound, when requested, and he’s gotten feedback about the virtual Masses.

“One particular parishioner, who is quite elderly, said that her children come each week and get Mass set up for her on her big TV screen,” he said. “She so enjoys being able to be part of the community and being able to hear the message for the week. It would be hard for me to take that kind of thing away from her, and at her age, I don’t know that she will ever be making a return to regularly attending Mass ever again.”

For people who are able to make it back to Mass, Fr. Brandt said he welcomes them back to church.

“Someone once joked to me that it’s nice to wake up, pour a cup of coffee and watch Mass from home on their recliner,” he said. “I trust that people will make their way back to Mass as the fear of (COVID-19) is lessened, with what we pray is a vaccine or cure in the near future.

“There are many more people tuning in each weekend for my streamed Mass than there are people in the pews at church,” added Fr. Brandt. “I will admit, though, just this week, I had two different families that weren’t attending any Masses start to attend daily Mass again at church, so maybe there is a movement towards returning to the Mass.”