Brown helping prepare 'Catechesis of the Good Shepherd' in Oshkosh

OSHKOSH — Imagine a learning center filled with miniature replicas of all the various components of a Catholic Mass from scaled-down priestly vestments, to the monstrance, paten and chalice, so that children can discover hands-on about what goes on during Mass. 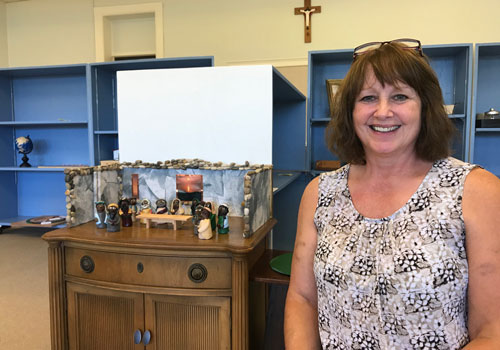 Your Catholic Neighbor: JoAnne Brown (Amanda Lauer | For The Compass)

That’s exactly what’s happening at Most Blessed Sacrament Parish in Oshkosh. The creation of this atrium space, which also has biblical play and learning areas, has taken countless hours. A good portion of them were provided by JoAnne Brown. It’s all in preparation for the Catechesis of the Good Shepherd program for children ages 3 through 12, which kicks off in October.

Brown has been the ideal person to set up this area and solicit donations from parishioners to bring it to life. “I grew up in the shadow of St. Anthony’s in Rockford, Ill., and my uncle is the now retired (Msgr.) Raymond Kertz. During my childhood and early teens he was rector of Holy Name Seminary in Madison,” said Brown. “I grew up in a church. I’m very comfortable in the church environment. My mom was a single mom and we spent a lot of time helping Uncle Ray decorate the church for the seasons.”

Blessed Sacrament’s director of evangelization and discipleship, Shannon Ausloos, explained that the Catechesis of the Good Shepherd program is based on the Montessori method of teaching.

“In the early church, the atrium was the entryway into the church building, where those preparing to become Christian received instruction,” said Ausloos. “Our atrium for children is a sacred space where our kids can encounter Jesus in a special way, learn about the liturgy and be prepared to fully participate in the life of the church. In order to help children encounter Christ, the atrium is beautiful and functional, designed to give children sacred space, independence, inspiration and essential truths about our faith.”

While Brown, who is mother to an adult daughter and adult son, does work parttime as Ausloos’ assistant, the bulk of her hours spent at Blessed Sacrament, especially lately, has been volunteer hours. You name it and she’s probably volunteered her time doing it at church. “The only thing I won’t do is lector,” Brown admitted.

“JoAnne knows so much about the church,” said Ausloos. “She’s there as a sacristan and she helps train altar servers, she washes linens, anything that has to be done. She does all those beautiful ministries on her own time and she loves it. That translates into what she’s doing in the atrium here because she sees the beauty of the Mass and is trying to bring that to the younger kids to help them see that.”

One goal of the program is for children to be more engaged in the Mass. “Kids see Mass up close, behind the scenes. So when they see the priest wearing green, they’ll know it’s Ordinary Time. They’re touchy feely. They’ll be introduced to the various apostles at the Last Supper (through clay figurines made by parishioner Lisa Dorschner and her daughters Gloria and Mary), maybe when they hear the Gospel according to Mark or Matthew, they’ll remember them. We give them the presentation but we don’t explain all of the things, we let them learn at their own time and place and as their faith grows, let them figure it out. We help stories from the Gospels come to life.”

There are three age levels in the program. “It’s immersive for the child to get to know Jesus. There’s no desks, kids sit on mats, teachers get on their level, the activities are child-led, everything is hands-on,” said Brown.

It took a tremendous amount of work to convert an old classroom into the atrium, including pulling out shag carpet, painting, ripping old chalkboards off the wall and making bookcases to create an alcove to separate the entrance of the room and coat area from the main part where the play and learning takes place.

Brown made the bookshelves herself. “My husband was very supportive because I needed his truck to haul the 4’ by 8’ sheets of plywood. He has lots of wonderful tools that we’ve collected through the years,” she said. Brown has spent late nights working on the atrium space with her dog Lucy at her side, sometimes as late as midnight. “I get a lot more done when the building is quiet and the phones aren’t ringing.”

Ausloos is very appreciative of all the work that Brown does for their parish. “JoAnne really is the Catholic neighbor. She lives this life 24/7. She has a really strong charism in hospitality. She always sees people’s needs and who needs that kind word and who needs to be loved and she always jumps up to do that. She has a great gift of craftsmanship; you can tell her what you want and she makes it happen.”

Name: JoAnne Brown
Parish: Most Blessed Sacrament, Oshkosh
Age: 57
Favorite saint: Anthony
Words to live by: “Is that how you would have liked to have been treated?”