What the different types of domes on churches symbolize

Now that parts of the upper Michigan have had their first dusting of snow within the past weeks and most of us have had frost, it might be time to look at why some churches have domes. (And snow may have something to do with that.)

While domes are not that common on churches in our diocese, the state capitol in Madison has a dome and most of us are familiar with the dome of St. Peter’s Basilica in Rome. Domes’ interiors in churches serve to draw the eye upward toward heaven internally, just as a steeple serves to draw the eye upward on a church’s exterior. This is why the insides of domes in churches often have paintings of heavenly scenes, lit by windows. 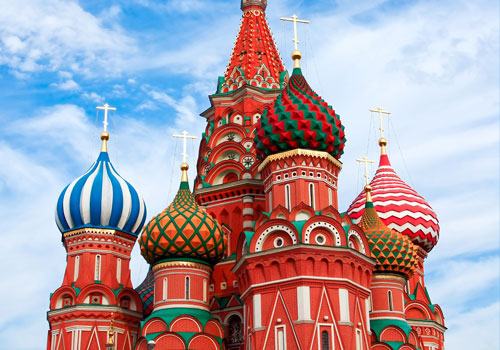 The domes of St. Basil’s Cathedral on Red Square in Moscow, Russia. There are nine domes in total, representing the nine choirs of angels. (Bigstock)

While domes were used as long ago as ancient Egypt, such as in the interior of the 5,000-year-old Bent Pyramid, south of Cairo, they became more common during the time of the Roman empire. The most famous of these was the Pantheon, built in 123 A.D. and dedicated to “all the Roman gods.” When this Pantheon was given to the Christians in 609 A.D., it was renamed the Basilica di Santa Maria ad Martyres (St. Mary and all the Martyrs.)

The Pantheon’s dome later became the model for St. Peter’s Dome (the basilica was completed in 1626). Michelangelo, who designed that dome, is said to have proclaimed, “I could build one bigger, but not more beautiful, than that of the Pantheon.”

When the Pantheon was given over to the Christian church, it was part of the Byzantine Empire — which had succeeded Rome. One of the most famous of the churches built under the Byzantine Empire was the Church of St. Sophia, or Holy Wisdom (Hagia Sophia in Greek), in Constantinople (now Istanbul). It was completed in 537 A.D. It later was converted to a mosque, then a museum and now a mosque again (in July). It, too, has a dome. In Muslim tradition, the dome (called a qubba in Arabic) is meant to represent the vault of heaven itself.

Various types of domes have graced churches and mosques through the centuries. Some of the most interesting, visually, are what are sometimes called “onion domes.” These tend to have more external interest than the previously mentioned domes.

Onion domes are seen most often on Russian Orthodox churches. The best known are the 12 domes of St. Basil’s Cathedral in Moscow. Built in the 16th century by Tsar Ivan the Terrible, the church is also known as “Cathedral of the Intercession of the Most Holy Theotokos on the Moat.”

The cathedral consists of nine chapels surrounding a central nave, which is dedicated to the protection of the Virgin Mary. The surrounding chapels honor Mary, the Trinity, various Orthodox saints, including St. Basil the Blessed, whose chapel was built last of all, during the reign of Ivan’s son, Fyodor I.

The domes of St. Basil’s look almost like party decorations, with their bright colors and patterns. Originally, all the domes were white – like the stone of the Kremlin which surrounds St. Basil — and the colors were only added later (finished in 1848). It is said that the colors are meant to represent the precious stones of the Temple in Jerusalem, as well as the description of the thrones of heaven found in the fourth chapter of the Book of Revelation.

The shape of onion domes developed later than what are called “helmet domes,” also found on Russian and Ukrainian churches. Helmet domes differ from onion domes because they are not wider than the tower on which they rest. Onion domes flare out. Some Orthodox churches, like Holy Trinity Orthodox Church in Catasauqua, Penn., explain this as representing the flames on candles, such as those that burn inside a church on the altar or as votive candles.

However, onion domes can also be found around Europe — in Germany, Bavaria, Austria and even parts of Italy. And this is where snow comes into the picture. According to SUNY Buffalo’s School of Architecture and Planning, the architectural shape may have developed because of the heavy snowfall in these areas. An onion dome on a tower more easily sheds the weight of snow than a helmet dome or a regular church steeple.

The Encyclopedia Britannica notes that the onion dome style — which seems to have originated in the Middle East — became popular in the 17th and 18th centuries because it “had the advantage of being decorative while not gathering snow during severe winters.”

While not common, there are onion domed churches in the United States. One is located in Libertyville, Ill. The Church of St. Sava Serbian Orthodox Monastery was built in 1925. It has 12 small domes — traditionally representing the 12 Apostles — and one larger central dome.

Yes, the number of domes has meaning also. A single dome represents Christ, while three domes for the Trinity and nine — like St. Basil’s — for the choirs of angels. Colors can also have meaning, with gold representing the light of God, green for the Holy Spirit, red for martyrs as well as eternal life and blue for Mary.

So the next time you see a photo of St. Basil’s brightly colored, candle-like domes, remember they have a similar meaning to the dome of St. Peter’s — they seek to lift our eyes to heaven. (And maybe keep the snow off during winter.)