Nothing is impossible with God (and with St. Rita!)

Statues have been in the news a lot this summer and, as I started to think about all the people statues represent, I was drawn to the rich history of statues in our Catholic tradition. In fact, after doing a little research, I quickly discovered that the Catholic Church has recognized over 10,000 saints, and that St. Peter’s Basilica in Rome has over 140 statues of saints on just the outside colonnade alone. I can see why we have visual images of these patrons: because it helps us imagine who they were as people and adopt them into our lives, marriages and families. With over 10,000 patrons to choose from, I happened to come across a statue of St. Rita of Cascia recently. Her image intrigued me and my curiosity about her life led me to discover that she is a very powerful saint for our marriages, families and our current time. 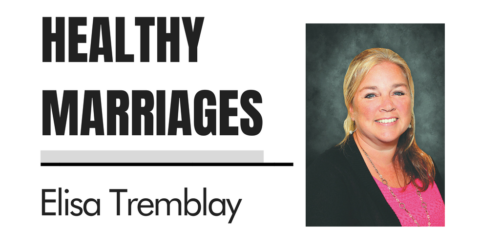 St. Rita of Cascia, who has many titles, is most frequently known as the patroness of impossible causes. She was born in Italy in 1381 and lived through a plague, dealt with warring factions within her community and endured an extremely difficult marriage. She tried desperately to raise her children in the faith, in spite of many negative influences. Her heart remained with Christ through all of these trials, and she lived through many experiences that can be likened to our current time. In learning about the life of St. Rita, I discovered the website for the National Shrine of St. Rita which is located in Philadelphia. This website (saintritashrine.org) has a lot of great information but, more importantly, it showcases many reasons why we need this beautiful saint interceding for us in heaven.

Under the title of patroness of difficult marriages, we learn that St. Rita was forced to marry a man when she was 12 years old. She desperately wanted to join a convent, but her family arranged a marriage for her to Paolo Mancini who was well known for his cruelty, infidelity and many enemies.

Sacraments, including marriage, are instruments of grace, and with this grace St. Rita was able to find the strength to glorify God in spite of her circumstances. Her witness was so powerful that, after 18 years of marriage, her husband had a profound conversion and apologized to her and to our Lord. Shortly after he converted, however, one of the enemies he had in town murdered him. Here again, St. Rita found the strength to publicly forgive those who murdered her husband.

She is also known as a patroness of parenthood, peacemakers and those seeking reconciliation. Warring families in her town convinced Rita’s two sons to avenge their father’s murder. Fearing that her sons’ mortal souls would be lost, Rita offered both of her sons to God and asked him to do whatever was necessary, including death, to prevent them from murdering. One year later, through God’s grace, her influence and prayers, Rita was able to get her sons to forgive shortly before they succumbed to dysentery and died a natural death without ever committing murder. Several years later, the bubonic plague came to her area and caused everyone to stop warring for the time being. Rita used this circumstance, along with her powerful intercession and witness, to influence the heads of the warring families to call off their feud and seek reconciliation with one another. Truly a miracle at the time!

Rita lived her remaining days as an Augustinian nun in the convent in Cascia and grew in holiness through prayer and her humble example. Her faith grew so strong that she asked our Lord to allow her to relieve him of some of his suffering and was granted the stigmata in the form of a  thorn upon her forehead which remained until her death. She was also found to be incorruptible after death and can be seen to this day at the basilica in Cascia, Italy.

So if you see a statue of St. Rita of Cascia, take note of the symbols that surround her, as they represent her endurance through extraordinary circumstances. Look up her life and story and learn from her examples of peace, patience and endurance. If you are currently facing an impossible situation in your life, your marriage or your family, know that St. Rita of Cascia is there to intercede and to help you carry the burden. St. Rita of Cascia, pray for us!

Tremblay is marriage and life ministries director for the Diocese of Green Bay.