STEPHENSVILLE — While the COVID-19 pandemic forced Catholics around the Diocese of Green Bay to avoid group gatherings, including services at church, some members of St. Patrick Parish used the down time to restore their 160-year-old church.

On Oct. 11, the parish gathered to celebrate 160 years of faith and, for many, to get a first glimpse of the interior that was restored between March and September. 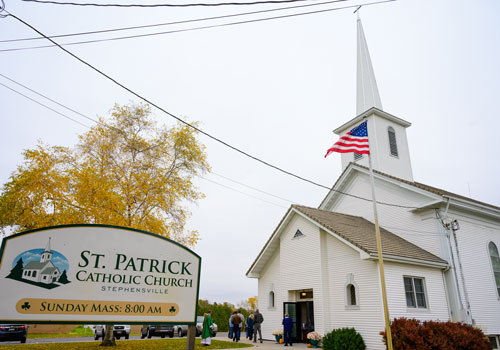 Parishioners exit St. Patrick Church following Mass Oct. 11. In addition to celebrating its 160th anniversary, the parish marked the completion of restoration inside the church interior. (Sa Lucero | The Compass)

One of the main highlights of the restoration was the church’s high altar, which had been converted to a simple design about 20 years ago, according to Fr. Michael Thiel, administrator of St. Patrick Parish. Other items that were restored included statues of the Blessed Mother and Jesus, a baptismal font, ambo and wooden cross.

A fresh coat of paint and gold trim around the stained glass windows and walls of the church completed the restoration “The gold paint matches the gold color used in the high altar and in the accent arches behind the restored statues,” noted a program that was prepared for the anniversary Mass.

Approximately 15 families pitched in with the restoration, making the cost of repairs minimal. Tia Brandt and her aunt, Jean Julius, were among the parishioners to spend many hours painting, fixing and restoring.

Brandt, who became Catholic 18 years ago, said she first set eyes upon the church’s interior 23 years ago, before the ornate high altar was dismantled. 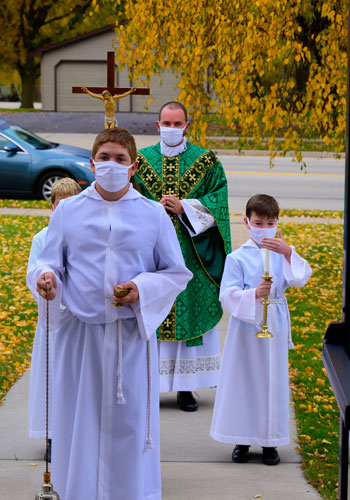 “When I walked into St. Patrick Church (in 1997), I was awestruck,” she said. “It was my first time there. … I didn’t know what Catholicism was. Probably less than a year later, everything got taken out. I remember being heartbroken and thinking, ‘How can you take out something so beautiful.’ Everything was kind of whitewashed.”

According to the anniversary program, since 1867, St. Patrick Church, which is the oldest wood-framed church in the diocese, “boasted ornate altars, statues, stained glass windows and paintings. In the late 1990s, diocesan and parish leaders moved to simplify churches, including St. Patrick.”

As part of the move to simplify, spires that decorated the high altar inside the sanctuary were removed. “Fortunately, whoever took the spires off must have intended for them to one day be reattached,” stated the program. “About 50 pieces … had been stored underneath the altar.”

Eight years ago, while serving on the parish worship committee, Brandt said she and others were cleaning the sanctuary area and noticed handles on either side of the high altar. Upon pulling the handles open, she was surprised to find the spires that were removed more than two decades earlier hidden below the altar. 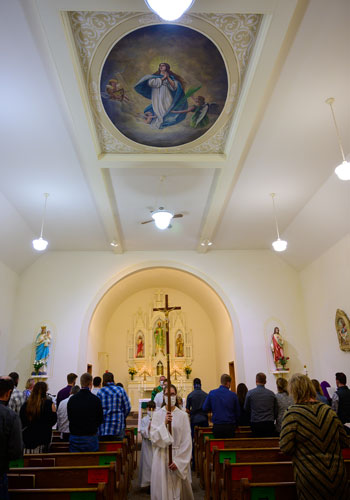 Last year, Brandt brought up the idea of restoring the spires and returning them to the altar. The parish was in the midst of a transition, with parish pastoral leader, Deacon Ken Bilgren, retiring and Fr. Thiel assigned as administrator. She decided to wait until Fr. Thiel was settled in before proposing the restoration.

In his homily Oct. 11, only the second Mass celebrated in the church since the pandemic hit, Fr. Thiel praised the many volunteers who made the restoration possible.

“I am grateful for all of those who have done so much. What a joy to be able to be back, once again, in this  house of God, this church that is so significant to this community,” he said.

He described how the restoration got off the ground.

“At our annual meeting last October, there was the desire to enhance the beauty of the church,” he said. “We brought that up during our parish mission planning last fall and with the pastoral and finance councils.”

Fr. Thiel said he met with Bishop David Ricken last July to discuss the church restoration. “He loved the idea of harmony and integrity that was seen throughout the plans we put together,” he said, “and that we respect the history of the community as well. Hopefully he has a chance to visit next year.”

Bishop Ricken had planned to celebrate the anniversary Mass, just as he did for the 150th anniversary, but he chose to suspend his public celebrations due to the pandemic, said Fr. Thiel.

Brandt, along with her two daughters and several other parishioners, began painting the spires last spring. “It took six times to get the right color of paint,” she said. “It was incredible to restore. Ray Meece, our handy wood man, fixed pieces so they could fit back on the high altar.”

Brandt’s aunt, Jean Julius, oversaw restoration of two large statues. “These two beautiful statues (of the Sacred Heart of Jesus and Blessed Mother) were set off to the side, one in the back and one in a back chapel,” she said.”We did not repaint them, we touched them up and blended in the colors.” Chips and cracks in the statues were also repaired. The statues were returned to prominent locations on the left and right sides of the sanctuary.

Jeff Darnick oversaw painting of the entryways. “The old brown paneling was painted to brighten things up,” he said. “It was outdated.” 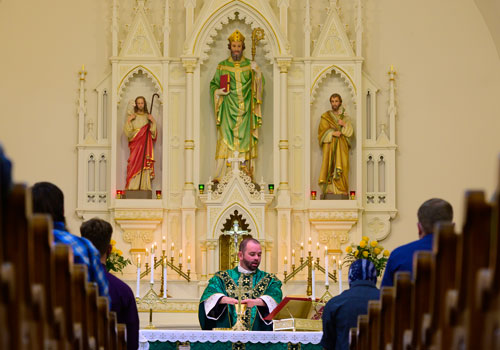 Fr. Michael Thiel offers a prayer over the eucharistic gifts at the Liturgy of the Eucharist during Mass celebrated Oct. 11 at St. Patrick Church in Stephensville. Behind him is the high altar that was restored to its original appearance, with spires added and painted with gold trim. (Sam Lucero | The Compass)

Darnick said his hope is that people come to church to pray. “I like hearing that (people want to see the restoration work), but I also like people coming here to pray and not sit and gawk.”

Brandt, whose son Mark — along with Sam Fassbender, Christian Julius and Andrew Wynboom — received the sacrament of confirmation at the Mass, said people “have been just amazed” at the restoration.

“It’s so nice to see the church back the way it used to be,” said Brandt. “To be God’s hands and feet, to be able to restore something that is so precious to our community, it’s been awesome.” 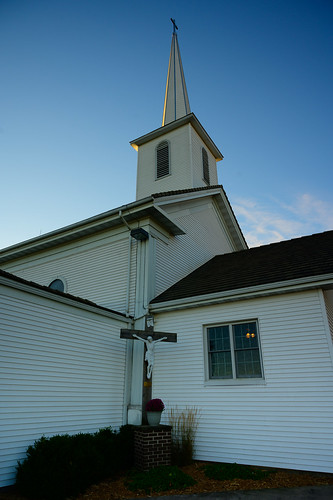