GREEN BAY — Sherry Steffel considers herself a lifelong member of St. Francis Xavier Cathedral Parish — “even for the 40 years when I lived in Madison, Honolulu, Washington.”

She quickly adds that “the Steffel family has been members of the cathedral since at least 1921 — so we are coming up on 100 years in this parish. I am very proud of that.” 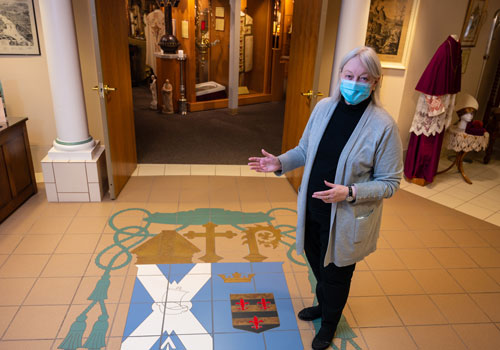 That gives her a particular love of her parish, but that love extends to the whole diocese and its parishes. Since 2019, Steffel has been president of the board for the Green Bay Diocese Museum, housed in the cathedral. Before that, after she returned to Green By in 2013, Steffel joined the museum board and its volunteers, who are “involved in all the nitty-gritty of running a museum because we have no actual staff.”

The museum houses historical items from around the diocese. It is supported by the cathedral parish, which gives them space at no charge.

“Somewhere the decision was made, and rightly so,” Steffel said, “that the cathedral is the mother church, and it should be the protector for the history (of the diocese), if it can be.”

While there are many items in the museum from Green Bay, there are others from around the diocese. And that’s how the board likes it. They want items from all 16 counties of the diocese.

“If it’s religious at all, we will take it,” Steffel said.

For example, the Two Rivers Historical Society recently donated 40 boxes they had stored for several years after the opening of St. Peter the Fisherman Parish in 2002, which was formed from four earlier parishes.

“All of a sudden, they needed the space in 2019,” Steffel said. “The vice president read The Compass and saw our blurb (about a devotional item sale that is currently on hold) and was not aware of the museum. They called the cathedral office … and had it all boxed up and delivered to my home — 40 boxes: statues, a movable altar, 26 paintings. They even paid for transportation from Two Rivers to Green Bay.”

Steffel says she first fell in love with history while a student at the now-closed St. Joseph Academy in Green Bay. She is also a member of the Brown County Historical Society, artifact chair for the Green Bay Antiquarian Society, belongs to the Brown County Federation of Historical Organizations and was recently asked to join the education committee at Heritage Hill State Park in Allouez.

While she at first wanted to become a history teacher, at college Steffel ended up studying oceanography-limnology (earning a Ph.D. from UW-Madison) and, later, a master’s degree in urban and regional planning. After working in Hawaii, she returned to Madison for a law degree and worked in the U.S House of Representatives and then for the State of Wisconsin for 30 years, specializing in environmental law. Yet her love of history remained.

“I always loved genealogy and was the family keeper of the artifacts,” she told The Compass.

Those family ties led her back to Green Bay when she retired, because several of her siblings live there.

Family also explains her favorite exhibit in the museum: her mother’s first Communion set from 1929.

When their mother died in 2005, Steffel and her siblings decided that “we cannot divide this up. We brought it to the cathedral, and the museum had never had a complete set.”

“She would be thrilled to death that we didn’t divide it up,” Steffel says of her mother’s exhibit.

Steffel said people don’t realize that the museum charges no entry fee and welcomes students. “We were inundated through the 2019-2020 school year with requests for tours for school kids,” she said.

She said that the students were probably most surprised by the variety. “Having things actually owned by the bishops — miters and rings. Jewelry always surprises — sparkly things — surprise kids a lot. I think they didn’t realize we would have those things.”

She said the children also were surprised to see ornate Communion rails and vestments.

“I don’t think they expected that — these things are not as simple as the ones you see nowadays. They are pretty spectacular.”

Then the pandemic hit, closing schools and the museum. But Steffel found “a silver lining.”

“The pandemic has given me a lot of time to dig into the records a little more,” she said, “to look at the old journals (from the cathedral parish), going back to the 1850s and reading them and indexing them. My project now is to create a big index.”

She’s reading the journals in chronological order. Most were written by pastors and often took the place of today’s bulletins with announcements and calendar events. However, since the cathedral parish was originally founded by German settlers, many journals are in German. Steffel hopes for a volunteer who could read German.

She also hopes that more people hear about the museum and contact her whenever they have items that might need a home.

“I am very excited about what I do with the museum,” Steffel said, calling it a place that preserves early Catholic artifacts.

“I hope that as the next generation ‘cleans out’ the homes of their grandparents and parents,” Steffel said, “they think about giving us a call on religious items before they toss the items in the dumpster.”

While the Green Bay Diocese Museum is closed due to the pandemic, its board is still looking for donations. They also offer tours by appointment. Call the St. Francis Xavier Cathedral parish office: (920) 432-4348.