Digital media producer, mother of two focuses on ‘liturgical living’ as a family

GREEN BAY — Lindsey Schwandt never imagined that attending a session at a Catholic conference would shape her career path, which, in turn, has helped her grow in her faith.

Following her first year at UW-Milwaukee, Schwandt attended a Steubenville Conference through the university’s Newman Center. 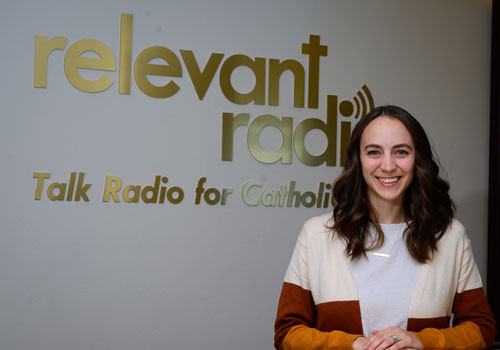 “I attended a session that Fr. Rocky (Fr. Francis Hoffman, executive director at Relevant Radio) was leading,” she explained. “That was really the first time I had ever met him. I knew people who listened to Relevant Radio, but, at 19, I never really had before.”

Schwandt admits that her interest was limited when Fr. Rocky spoke about radio. Her major was journalism, but advertising was her career pursuit at the time. Schwandt interned at an advertising agency in Milwaukee.

Nonetheless, the session had a lasting impact. A couple years later, Schwandt contacted Fr. Rocky to inquire about internship opportunities at Relevant Radio, headquartered in Green Bay. He didn’t have any available at the time, but said they would make one.

“I interned a year before I graduated,” explained Schwandt. “I went back to school for my final year and emailed him again a couple months before graduation. I asked him, ‘Do you have any jobs available?’ He said, ‘Well, we can make one.’

“I wanted to move closer to home,” added Schwandt, who had grown up as a member of St. Mary of the Immaculate Conception Parish, Greenville. “I liked being in this area. I also really felt a pull to work for a Catholic organization.”

Schwandt, who uses her maiden name Kettner professionally, started at Relevant Radio the day after her college graduation in 2013.

“I was a production associate. I worked in the programming department. I ran the board, took phone calls during live shows, ‘The Drew Mariani Show,’ helped with audio production and did the behind-the-scenes work with microphones,” she explained. “I did that for a couple years.”

Schwandt added that while social media brings out the ugliness in some people, it’s also a great way to “reach people with beauty.”

“I try to kind of break through all of the nastiness that’s out there,” she said. “Be a little bit of light in what otherwise might not be an uplifting place. It brings out the worst in people at times, but we also get so many testimonials from people who tell us how Relevant Radio has changed their life, brought them back to the faith.”

Schwandt’s life has changed a great deal over the past seven and a half years since she started at Relevant Radio. A few days before college graduation, she met Rustin Schwandt, whom she married in 2015. Rustin, an architect, originally from the Appleton area, also attended UW-Milwaukee, but they had never met during their years on campus.

Rustin converted to Catholicism, a decision he made entirely on his own, said Lindsey.
“I was very open about my faith,” she said. “I invited him to Mass. He was a little hesitant.”

Rustin signed up for a class offered by St. Mary Parish, Greenville, and later completed the RCIA (Rite of Christian Initiation of Adults) program. Lindsey was his confirmation sponsor. Rustin became a Catholic before proposing to Lindsey.

The couple has two children, ages 3 and 1. They are members of St. Francis Xavier Cathedral Parish in Green Bay. Lindsey served as a lector and extraordinary minister of holy Communion.

“I’m now a child wrangler during Mass,” she said with a laugh, “so I took a step back. In high school and college, I taught religious education.”

As newlyweds, Lindsey and Rustin were involved in young adult ministry. They are now part of a Catholic couples’ group that meets monthly to “grow in friendship and faith and help each other strengthen our marriages,” she said.

Living out their faith as a family at home is important, she added.

“We do a lot of liturgical living at home,” said Lindsey. “We focus on celebrating the feast days, entering into the liturgical seasons. We make a big deal about our baptismal anniversaries and our patron saints. We celebrate those feasts. I hope that’s something that my kids remember and they really just learn to love the faith because it’s part of our everyday life.”

Lindsey is thankful for the foundation of her faith developed during her youth. She credits her family and Fr. Mark Vander Steeg, former pastor in Greenville, for their influence. She is also thankful for pilgrimage experiences that strengthened her faith, including the March for Life, World Youth Day 2011 in Madrid, Spain, and a trip to Italy. She attended World Youth Day with members of campus ministry from Marquette University.

“I made some really great friends. I would take the bus downtown to visit them at Marquette,” she said. “I spent three weeks in Madrid. I walked part of the El Camino (de Santiago) pilgrimage through the Pyrenees. I was able to see Pope Benedict (XVI) for Mass.”

Lindsey would like to visit the Holy Land and return to Europe with Rustin in the future. Today, family and working for the church remain her priority.

“It’s an adventure. They are so beautiful and have so much joy,” she said about her children. “I like seeing life through their perspective.”