‘All My Brothers and Sisters’ is available as free download

MILWAUKEE — The Franciscan Sisters of Christian Charity have regularly featured songs on their website (fscc-calledtobe.org/resource-type/songs). The goal is to spotlight a piece of music deserving of a wider audience. 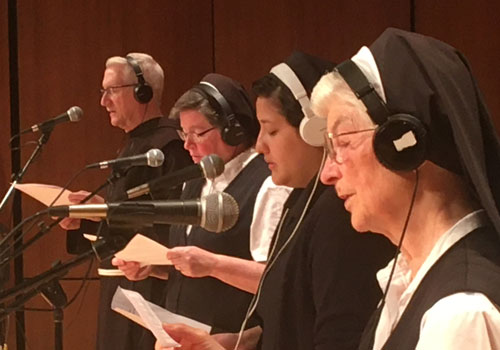 Franciscan Fr. John Dombrowski, left, and Franciscan Sisters of Christian Charity Myra Jean Sweigart, Concepcion Medina and Ann Carla Baumann record background vocals for the song “All My Brothers and Sisters” at Holy Family Conservatory in Manitowoc. The song, a collaboration with musicians and vocalists from Milwaukee, is available as a free download. (Submitted photo | For The Compass)

The most recent Franciscana Costa Collaboration, “All My Brothers and Sisters,” delivers a message of peace and unity. The sisters not only share the song, but also their voices. Srs. Myra Jean Sweigart, Ann Carla Baumann and Concepcion Medina provided background vocals along with Franciscan Fr. John Dombrowski.

“All My Brothers and Sisters,” is a collaboration with musical artists from Milwaukee. Mark Kolter, who serves as the sisters’ communications counsel, wrote the song.

John Sieger, a remarkable singer-songwriter, co-produced with me at his studio in Wauwatosa,” explained Kolter. “He helped (me) connect with some of the artists, like lead vocalists, R and B soul singer Joe Jordan and The WhiskeyBelles’ Chrissy Clobes, both from Milwaukee. We intentionally were mixing up genres.

“And he really helped develop a solid, basic track,” added Kolter about Sieger. “That was important. I wanted to push the singers a bit. I didn’t want the song to sound too polite, but have some urgency.”

The chorus was developed from a number of Kolter’s unfinished songs. He tried to keep a “Franciscan frame of mind” during the writing process.

“It’s really about going out and engaging the world and becoming more enlightened and aware as you do so,” he said. “Maybe some paralleling of St. Francis’ experience; not just joining a movement — that’s easy to do — but being insistent that truly everyone is heard and respected.”

The sisters and Fr. Dombrowski recorded at the Franciscan Center Auditorium at Holy Family Conservatory in Manitowoc. “I think that also provided a subtle inspirational presence in recording,” said Kolter.

“We were really trying to stay on the Franciscan wavelength. Even though Francis probably wouldn’t have used 30 tracks,” he added. “I hope it’s perceived as being sort of a transpolitical song, maybe in some small way to encourage people to authentically seek common ground these days and have a sincere discussion; not throw rhetoric around.”

More collaborations are likely, said Kolter. He pointed out that there are numerous talented singers and musicians who are unheard in areas where the sisters serve — northeast Wisconsin, Arizona, Missouri, Ohio and Michigan.

“Sr. Maria Guadalupe, from North Carolina, one of their new sisters, wrote a wonderful poem, ‘Water From the Rock,’ based on John 7:37, that could be set to music,” said Kolter. “And several sisters write music for their morning and evening office prayers. Manitowoc is a very musically literate community thanks to the sisters’ Holy Family Conservatory. Exploring a Spanish or Mariachi version of ‘All My Brothers and Sisters’” is a possibility.

“All My Brothers and Sisters” was mixed for streaming by John Sieger and Kyle Krukowski of Mad Scientists Audio Labs. To access the free download, click here.