Catholics honor only three, but other Christians note Archangel Uriel

On Nov. 8, both Greek and Antiochian Orthodox churches will celebrate the “Synaxis of the Holy Archangels.” Synaxis is a Greek word meaning “a gathering of beings for worship.”

Orthodox churches honor several archangels by name — usually seven in number. In the Catholic tradition, we honor only three archangels by name: Michael, Gabriel and Raphael. These three can be found listed in the Bible by name. No other angel is named in the canonical books of the Bible. 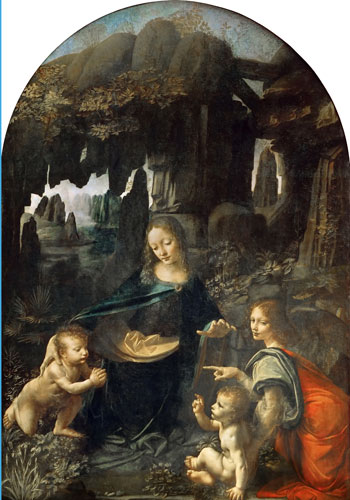 “Virgin of the Rocks” by Leonardo da Vinci is displayed in the Louvre in Paris, France. The figure on the right is the Archangel Uriel with (from left) St. John the Baptist, the Blessed Virgin Mary and the child Jesus. (Courtesy of Wikimedia Commons)

More than three
However, the Orthodox Church of America (OCA) lists other angels, by various names. Most common are Uriel, Sealtiel and Jehudiel. Uriel’s name means “the fire or light of God.” The OCA says that people “pray for him to enlighten those with dark minds.”

The Catholic Encyclopedia also cites the Jewish tradition of naming seven archangels, based on the non-canonical Book of Enoch (an ancestor of Noah). Enoch is listed in the Letter of St. Jude (1:14). These angels include our three named above, along with Uriel, Raguel, Sariel and Jerahmeel.

While, by Vatican decree, Catholics are not to honor any other archangels by name, you will still see statues of the angel Uriel in bookstores and on Catholic e-commerce sites. Uriel is shown as an angel holding a flame. This is because of the translation of his name listed above.

Sacrament of confirmation
In the Anglican church (Episcopalian churches outside of England), Uriel is also recognized and has the honor of being the “angel of Confirmation.” According to the website (urielsg.org) of St. Uriel Episcopal Church in Sea Girt, N.J., “Uriel is the patron of the sacrament of confirmation. He carries the sword of truth for soldiers of Christ, which we become through this sacrament. Fire reminds the Christian of the descent of the Holy Spirit at Pentecost and the flames of the gifts of the Holy Spirit.”

In Jewish tradition, there are also references to Uriel as being the angel who warned Noah about the coming flood. (This is also the case in the Book of Enoch.) In other Jewish mystical traditions, Uriel and three other archangels are recognized as the four creatures that stand around the throne of God (Ez 1:5). Uriel is said to be the lion or the eagle. Also in Jewish tradition, Uriel was said to appear as a lion in the Temple in Jerusalem to take up to heaven the offering placed on the altar.

Da VInci
Turning to Christian medieval times, Uriel is listed as linked to Sunday. There were also several supposed “gospels” popular in the Middle Ages. From them, arise stories such as were used by Leonardo da Vinci in his famous “Virgin of the Rocks” which hangs in the Louvre in Paris. This 15th century painting, of which there is another version in London also credited to da Vinci, the archangel Uriel has saved the child John the Baptist from King Herod’s men and now travels with him and the Holy Family to Egypt.

About a century later, John Milton wrote “Paradise Lost.” In it, Uriel was tricked by Satan into giving the evil angel directions to the Garden of Eden. Too late, Uriel realized his mistake and tried to send other angels to help Adam and Eve.

All of these stories make Uriel an interesting figure. However, Catholics are asked to only honor the three archangels named in the Bible. The “Directory on Popular Piety and the Liturgy,” issued by the Vatican Congregation for Divine Worship in December of 2001, states, “The practice of assigning names to the Holy Angels should be discouraged, except in the cases of Gabriel, Raphael and Michael whose names are contained in Holy Scripture.”