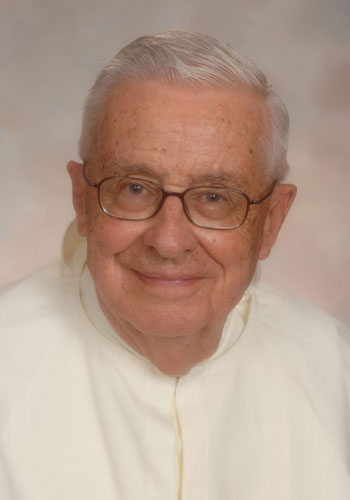 Born on Nov. 11, 1922, in Fond du Lac to the late Edward and Gladys (Adams) McKeough, he attended St. Joseph Parish in Fond du Lac. He enrolled at St. Norbert College in the fall of 1940, and two years later, he was recruited into the Army.

After earning a master’s degree in economics from Marquette University in Milwaukee in 1959, Fr. McKeough taught economics for 25 years at St. Norbert College. His ministry took a new turn when he was called to the mission field.

He began teaching an economics course in Lima, Peru, while administering the sacraments and tending to the poor, elderly and the sick. In 1979, Fr. McKeough returned to De Pere and was appointed the finance director for Abbot Pennings High School. He was a faculty member there periodically until 1987.

After his mother’s death in 1988, he returned to the missions and spent the next 13 years as an associate pastor in Mexico’s poorest regions. In 2004, Fr. McKeough returned to the states and retired to St. Norbert Abbey.

He enjoyed celebrating a weekly Spanish Mass at St. Willebrord Parish in Green Bay. Fr. McKeough is survived by the Norbertine community; several nieces, nephews, cousins and friends. He was preceded in death by his parents and brother, William.

Visitation will be held on Wednesday, Nov. 18, 3-7 p.m., at St. Willebrord Church, 209 S. Adams St., followed by a short prayer service at 7 p.m. Face masks are required and social distancing will be observed.

The Norbertine Community will privately celebrate a funeral Mass at a later date.