ALLOUEZ — Fr. Matt Settle is often asked how long he has been growing his beard. He really doesn’t have an answer, he said, and soon, the question may no longer come up. 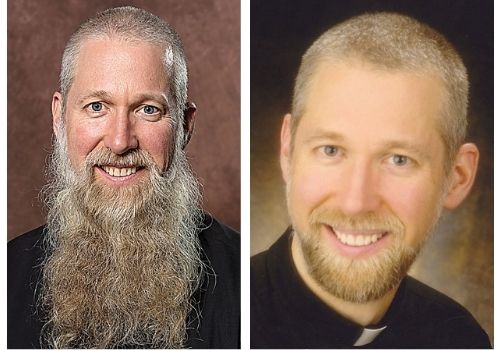 The fate of Fr. Matt Settle’s beard will soon be decided by the results of the “Fun Razor/Save the Beard Contest.” A photo from the early years of his priesthood shows Fr. Settle, who was ordained to the priesthood in 2004, with much less facial hair. (File photos | The Compass)

The “Three Parish Family” — St. Anthony, Tigerton; Holy Family-St. William, Wittenberg; and St. Mary, Marion — organized a “Fun Razor/Save the Beard Contest,” which will close this month. Fr. Settle, pastor at the three parishes, agreed to cut his beard as a way to raise money to offset the cancellation of fundraisers due to COVID-19. One of the major fundraisers canceled was “Not Just Another Car Show!” usually held the third weekend in September in Marion.

“(The Fun Razor idea) came about one day when my husband (Jim) and I were out for a Sunday drive,” explained Jayne Radtke, a trustee at St. Mary Parish. “We were discussing the car show and how we could have an alternate fundraiser. He said to me, ‘Why don’t you ask Fr. Matt if he would shave his beard?’ So, I went to church the next weekend and mentioned it to Father.”

Radtke thought that maybe Fr. Settle could cut some of the beard. Anne Poole, who serves on the car show committee, suggested that to raise a significant amount of money, it needed to be shaved off.

“It didn’t take a whole lot of convincing,” said Fr. Settle. “I did something similar at my previous assignment to see if we could meet the Bishop’s Appeal.”

Fr. Settle named the contest and set the target amount to be raised. If each parish receives $5,000 in donations or a total of $15,000, Fr. Settle’s beard may be shaved. Donors can vote to shave or save. Most adult parish members support shaving the beard, said Fr. Settle.

“All of the young people want to save the beard, the school age children and a few families are on the ‘save’ side,” he said. “There is a little good nature rivalry between the two camps. My immediate family sent out notices to a lot of people, to extended family, so it’s wide ranging. Whatever happens, (the target amount) is a pretty ambitious threshold.”

“We have a contingency of fellow parishioners who are campaigning to keep the beard,” said Radtke. “Right now, we all need a little something to smile about. Father mentions it sometimes in his intentions to pray for the beard, on a Saturday when there are six of us ladies there. It’s been a lot of fun for the parishes. It’s brought people together.”

Each parish will receive the money designated by donors. That amount could exceed the $5,000 goal. Donations that are not designated to one of the parishes will be divided three ways. The car show usually raises $5,000 for parish needs and special projects, said Radtke.

“It’s a huge event. We look forward to bringing it back,” she said. “St. Anthony’s always does a fundraiser. Holy Family-St. William also has a deer hunter’s dinner. They have a raffle and other fundraisers they weren’t able to hold.

“I think it’s just really great that (Fr. Settle) would do this for us,” she added. “He loves us to do this to make money for our parishes.”

The contest closes on Sunday, Nov. 29. The beard will be shaved following the 10:30 a.m. Mass at St. Mary Church, if the financial goal is achieved and the votes go that way.

“It’s my understanding that (Fr. Settle’s) razor will be set at the same length he sets for his head,” said Radtke, who supports shaving the beard. “It will probably be freezing that day, but it will be fun for everyone.”