Tradition of a special Mass remembers Mary’s own Advent

We celebrate the First Sunday of Advent this weekend, Nov. 29. Sundays are always a big celebration day in the church. Each Sunday is a mini-Easter, when we celebrate “the Lord’s Day” and the joy of our salvation. But Saturdays are pretty special, too. And, during Advent, they take on an even brighter image. 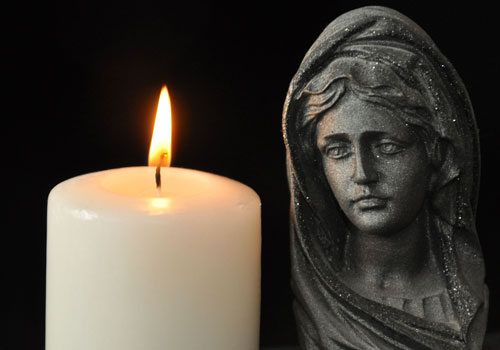 A candle and a statue of Mary create the peaceful image of a Rorate Mass during Advent. (courtesy of Bigstockphoto.com

Saturdays, by church tradition, are linked with the Blessed Mother. And to Advent, as Capuchin Fr. Raniero Cantalemessa reminded us last year in his Advent reflection at the Vatican. (Fr Cantalamessa — who will officially become a cardinal on Nov. 28 — is the preacher of the papal household.)

“(Mary) didn’t celebrate Advent,” Cardina-designatel Cantalamessa said, “she lived it in her flesh. Like every mother bearing a child, she knows what it means to be waiting for somebody and (she) can help us in approaching Christmas with an expectant faith.”

The tradition of honoring Mary on Saturday is old and based on Saturday being the day when the Lord Jesus rested in the tomb after his death on the cross. Tradition says that Mary’s faith did not waver during this day of mourning and that the Lord himself visited her on this day. Today, in many Spanish-speaking areas, Holy Saturday is a time to honor “Nuestra Señora de la Soledad” or “Our Lady of Solitude.”

Many Marian traditions and prayer practices have been tied to Saturdays, such as the Carmelite order and their promotion of “the Sabbatine Privilege.” This is the belief that Mary, in a vision to Pope John XXII in 1322, promised she would aid souls in purgatory, on the Saturday following their deaths, for those who wear the brown scapular.

A specific tradition dealing with Mary and Advent is the Rorate Mass. It is named for the reading from the Book of Isaiah that is heard often during Advent: “Rorate caéli desuper et nubs pluant justum.” “Shower, O heavens, from above, and let the skies rain down righteousness” (Is 45:8). It is used for the Introit (the introductory prayer) on the Fourth Sunday of Advent, as well as in daily prayer during the season. (It is also part of the readings for Friday, Dec. 18, this year.)

Before the liturgical changes following Vatican II, the Rorate Mass in honor of Mary — upon whom the Holy Spirit rained down the Sun of Righteousness — was celebrated early in the morning, while it was still dark, on Saturdays. The only light came from candles — at first because candles and oil lamps were the main source of church lighting before electricity. Later, candles were used because their pure white wax symbolized the pure body of Christ that was formed in the womb of the Blessed Mother.

The Rorate Mass tradition faded, but has been making a comeback in some parishes, especially those that use the extraordinary form of the Roman Rite (the Latin Mass).

The vestments for a Rorate Mass are white, not the purple of Advent, because it is a Mass in honor of the Blessed Mother of our Lord. (White vestments honor the Lord.)

The Marian dimension of the Rorate Mass is explained by St. Gianna Beretta Molla Parish in Northfield, N.J., which celebrates this Mass during Advent: “In Advent, we live spiritually between the Annunciation and the birth of Christ. Mary teaches us the spirit of Advent. During the nine months of pregnancy, Mary lived a hidden life, in the spirit of silence and intense intimacy with Christ she carried in her womb.”

Advent is a time of waiting, and the church waits with Mary for the coming of Emmanuel (God with us).

As Pope Francis prayed last Dec. 19, at his Sunday Angelus reflection: “May the Virgin Mary help us, as we approach Christmas, not to allow ourselves to be distracted by external things, but make space in our hearts for him who has already come and wants to come again to heal our illnesses and give us his joy.”