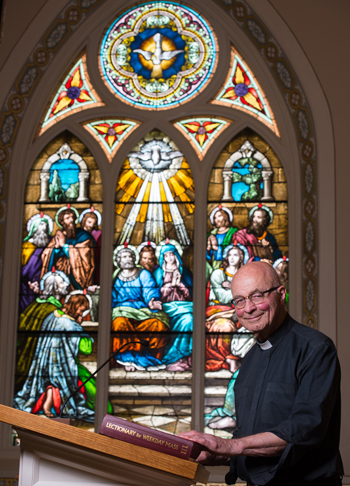 Fr. Milton Suess is pictured inside Immaculate Conception Church, Luxemburg, in 2018, the year he retired from active ministry. He passed away Dec. 13. (Sam Lucero | The Compass)

Fr. Suess grew up in Pilsen as the oldest of five children of Frank and Theresa (Ledvina) Suess. He first considered the priesthood in eighth grade when he was asked about (considering) a vocation by Fr. John Johanek.

Fr. Suess served three months as assistant pastor of St. John the Evangelist Parish, Green Bay. He then taught Latin for 10 years at Sacred Heart Seminary, Oneida (now closed), and ministered as a prosynodal judge of the Diocesan Tribunal. Fr. Suess earned a master’s degree in Latin at the University of Wisconsin-Milwaukee in 1969. In 1973, he was appointed pastor of St. Ann Parish, Saint Anna. He became pastor in Luxemburg in 1980. In addition to his parish ministry in Saint Anna and Luxemburg, he also served at St. Joseph Parish, Champion, for five years (temporary administrator and pastor) and Holy Trinity, Casco/Slovan, for 14 years.

Fr. Suess also served in other capacities, including a three-year term as episcopal vicar, diocesan director of Catholic cemeteries and canon penitentiary of the diocese. He retired to senior priest status in 2018.

Celebrating Mass was what Fr. Suess enjoyed most about his priesthood, he told The Compass in a 2013 interview in celebration of his 50-year jubilee. He was also thankful for the opportunity to teach religion to fifth and sixth grade students at St. Mary School and visit other classrooms.

In his free time, Fr. Suess enjoyed gardening, which he described as a “part of life” because he grew his own food, and reading. Many of his books helped him keep up with the languages he spoke: Czech, Latin, German and Spanish, in addition to English.

He traveled to the Czech Republic several times and served as an interpreter for Czech people who visited the United States.

The funeral Mass, limited to family and priests of the diocese, will be held on Dec. 17, at St. Mary Church, Luxemburg, with Bishop David Ricken as the celebrant and Fr. Paul Paider as the homilist. Burial will follow Mass in St. Joseph Cemetery in Pilsen.