COMBINED LOCKS — Guests traveled back in time Dec. 4 and 5 to sample the sights and sounds of Bethlehem at the time of Jesus’ birth. The adventure, experienced in the comfort of heated automobiles, took place in the parking lot of St. Paul Church from 6 to 8 p.m. Seven stations, featuring scenes from Jesus’ birthplace, were erected by parish volunteers. The live, drive-through Nativity attracted an estimated 550 vehicles.

About 75 parishioners made the two-night Advent event possible, according to Bob Reinke, organizer. 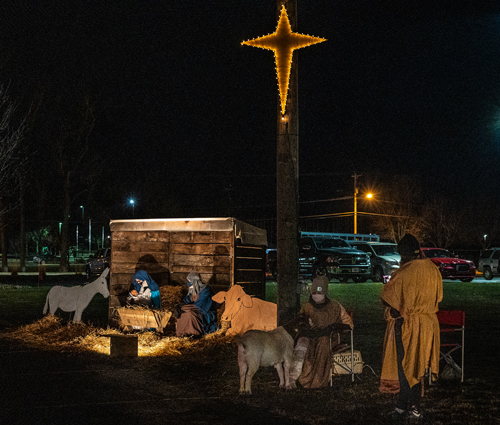 The parking lot of St. Paul Church in Combined Locks served as a drive-thru “Village of Bethlehem” as part of a live Nativity Dec. 4 and 5. Above, shepherds stand near the star in Bethlehem while Mary and Joseph, played by Lexi Parker and Trevor Uitenbroek, sit in a stable with baby Jesus. (Sam Lucero | The Compass)

“The event actually came about when my wife and I were asked to attend a similar event in Oshkosh last year,” Reinke told The Compass. “Once we attended, we both fell in love with the event and were moved to pursue making this a part of our parish.”

With the approval of Deacon Dave Hayden, pastoral leader, and other parish leadership, the plan was set in motion.

“At that point, it took on a life of its own and there were countless people who made this come to life,” said Reinke. “Without the help of our parish members, none of this would have been possible. I had the idea in my head, but they made it become a reality. It truly has been a labor of love for all involved.”

The labor involved in recreating scenes from Bethlehem was on display in each of the seven Scripture-based stations. A gate welcomed guests in their vehicles to the “Village of Bethlehem,” along with signs featuring passages from the Gospels of Luke and Matthew describing the scene.

Parishioners, dressed in full costumes, portrayed Roman soldiers who guarded the city gate, innkeepers, villagers, shepherds, three kings and a tax collector. The seventh station offered the scene all came to see: Jesus in the manger, with Mary and Joseph, played by Lexi Parker and Trevor Uitenbroek.

As cars entered the village, soldiers handed out programs that described each station. It also included discussion points for each station. For example, the first question asked, “Where is my family from? If we had to ‘be enrolled’ like Mary and Joseph, where would we have to go? Who has cared for me and stood by my side in hard times?”

Prayer intentions were also included in the program.

A special FM radio signal was created, allowing cars to turn on their radios to a station and listen to songs sung by live musicians while following the path lit by candles inside plastic milk jugs. Near the last station, a tax collector, played by Lisa Doerfler, collected donations from cars. Funds raised at the event were donated to Pillars, a homeless shelter and housing resource for low-income families in the Fox Valley.

Deacon Hayden said the event raised $3,478 for Pillars. He said that volunteers want the event to continue. “They wanted this, they put it together and they want it to go on and on,” he said. “And that’s what a parish is about.”

Reinke said the live Nativity was a way to bring joy to the community “during this difficult and stressful time of the COVID-19 pandemic.”

“Unfortunately, there are so many of our parish and community members who simply are not comfortable or able to attend church services during one of the most beautiful seasons of the liturgical year,” he said. “We wanted to bring just a small piece of that back to them while allowing them to stay safe in the comfort of their own car.”