ALLOUEZ — An alumnus of the Global Outreach Catholic Exchange Program celebrated two milestone moments within a few weeks. Miro Hazy, a native of Slovakia who attended Roncalli High School in Manitowoc in 2012-2013, was married to his wife, Maria, on Aug. 8. On Sept. 9, he was ordained a Byzantine Catholic priest.

“After my wedding, there was one week to be ordained a deacon, then one month later to be ordained a priest,” he said in a video call with The Compass. “We don’t have strict dates like the Roman rite that you have to be a deacon for a year or a half year. For us, it’s just the decision of the bishop.” 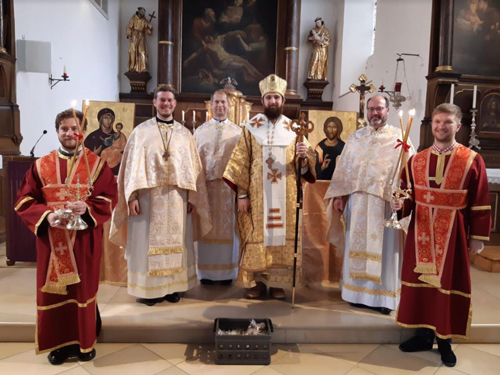 Byzantine Fr. Miro Hazy, second from left, was a celebrant at a St. Nicholas liturgy in Germany. Fr. Hazy, who is from Slovakia, was a student at Roncalli High School in Manitowoc in 2012-2013 as part of the Global Outreach Catholic Exchange Program. (Submitted Photo | For The Compass)

Fr. Hazy is the first alumnus to be ordained in the Byzantine Catholic rite. Others ordained to the priesthood include Fr. Ivan Barus, Jesuit Fr. Ladislav Sulik and Salesian Fr. Marek Pancura, all from Slovakia, and Fr. Dimnic Ettler of the Czech Republic. Two current seminarians — Valentin Harnicar from Slovakia and Josef Valenta from the Czech Republic — are Global Outreach alumni, along with Sr. Klara Kollar from Budapest, Hungary, a religious sister in the Communaute du Chemin Neuf, a French community.

“Servant leadership, as practiced in Global Outreach, is all about inspiring young people to use their gifts in service to others and to help them become servant leaders by inspiring others through their example,” he said. “This may lead to different pathways in the students’ subsequent lives. For example, two of our alumni decided to major in environmental studies as a way of serving the global community, and several alumni have dedicated a year or part of a year to mission work in various parts of the world.”

Before Fr. Hazy arrived in Wisconsin, he knew that he was called to be a Byzantine priest. He attended a St. Andrew Dinner in the diocese for young men open to the priesthood where he met Bishop David Ricken.

“He asked me if I would like to become a priest,” explained Fr. Hazy. “I said, ‘Yes.’ He said, ‘Oh great, would you like to come to our seminary because you have so many priests in Europe?’ I said, ‘You should know that I’m a Byzantine Catholic.’ He said, ‘No problem.’ I told him, ‘But I would like to get married.’”

While attending Roncalli, Fr. Hazy was hosted by the Tim and Patty Lohr family of St. Peter the Fisherman Parish, Two Rivers. He said that the school year in the United States provided freedom for discernment.

“It’s not so strict like in Europe where I would share my feelings and they would, basically from the beginning, say, ‘OK, you are going to be a priest,’” he explained. “In the States, you can take time, step by step. If people change their minds, there are not so many (people) pushing.

“I realized that it was my vocation with God,” he added. “There are no other people. I didn’t have my family here. I had to go to other churches in other languages, but still God spoke to me.”

Shortly after Fr. Hazy first arrived at the Lohr’s home, he told Tim that his mission was to teach people to pray.

“This 17-year-old kid was very motivated,” explained Tim. “I would describe his (initial) approach to talking to people about faith as heavy-handed. There was no subtlety. We worked through that.”

The Lohrs, who have five grown children, remain close with Fr. Hazy. They were scheduled to attend his wedding, but couldn’t due to COVID-19. They viewed his ordination on livestream. Patty has traveled to Europe for a visit. The Lohrs have hosted Fr. Hazy’s family and his best friend.

“He treasured family,” said Patty. “He truly loved his brothers and sisters here, as he called them.”

“What’s really nice about the program is they do an incredibly good job of screening the kids,” said Tim. “The kids are faith-filled, high quality, good students, who are assets to the schools they attend and the families they are in.”

Fr. Hazy’s outgoing personality served him well at Roncalli. He even won the “Mr. Roncalli” contest, which raises money for charity.

“He was an excellent fit at Roncalli and actively participated in all aspects of our school experience,” said John Stelzer, Roncalli president. “His greatest interest was in the development of his faith and encouraging others to grow as Christians. Global Outreach has done an excellent job of placing young people in our Catholic school. The students have been a wonderful addition to their host families, our school community and our parishes. Miro grew spiritually, academically and emotionally during his time at Roncalli.”

There were some challenges for Fr. Hazy, while he was an exchange student. Mass was much different than the liturgy in his homeland. Eucharist in the hand and girls serving at the altar stood out.

“I remember how much he felt at home when we took him to St. Nazianz (Holy Resurrection Monastery) with the monks and he went to Mass there,” said Tim.

Fr. Hazy is currently in Germany, studying for his Ph.D. He and two other priests received permission to serve at a Byzantine chapel in the Diocese of Eichstätt.

“It’s a pity if people don’t get the liturgy because of the coronavirus situation,” said Fr. Hazy, 25. “We now have a temporary parish, Holy Cross Church, where we are doing liturgies on Sundays and on feast days.”

Maria, who is also from Slovakia, is a medical doctor and recently began working in a hospital. Fr. Hazy’s studies will take three to five years. He then hopes to be a pastor at a newly formed Byzantine Catholic parish for Slovaks, who are currently not being served, in the northern part of Bavaria. He also plans to continue to support Global Outreach.

“I always try to promote Global Outreach in my homeland, and I still keep in contact with a lot of people,” he said. “The five years after I came back from the United States, I was really busy with Global Outreach. I organized many summer trips for American students and staff when they came to Europe. I was helping with interviews. There is a chain of alumni that help the Global Outreach staff.”

“Though we are already blessed with a number of host families, we are in need of additional families to make that commitment for some of the remaining students,” he added.

“I encourage families to be a part of this,” said Patty, “or to donate, if you can, to help keep it going.”

“When I look back, it was like a puzzle,” said Fr. Hazy. “Every single person was a piece of the puzzle. It made me stronger and taught me a lot. I have wonderful memories.”