One of the thrills of photographing people for The Compass is getting to listen to their stories. I recently traveled to Greenville to photograph Jim Cotter, who will be featured as a “Catholic Neighbor” in our Feb. 5 issue. Patricia Kasten wrote the story and I took his photo.

Cotter, 85, has a fascinating tale, so do not miss reading Pat Kasten’s story. After photographing him inside St. Mary of the Immaculate Conception Church, holding a painting of Blessed Solanus Casey, Jim shared details about meeting Fr. Casey, who celebrated his first Mass at St. Joseph Church in Appleton on July 31, 1904. Jim Cotter holds the rosary given to him by his mother before entering the military. It was blessed by Blessed Solanus Casey. (Sam Lucero | The Compass)

Jim was preparing to go overseas, having enlisted in the military. He was visiting his brother, Fr. Pius Cotter, who, like Fr. Casey, was a Capuchin Franciscan. Jim said he spent about 20 minutes with Fr. Casey, talking to him about his anguish leaving the country for the first time. He said Fr. Casey told him to bring his fears to the Lord and to pray.

Jim had a black rosary with him, which his mother had given him, and he asked Fr. Casey to bless the beads. If and when Fr. Casey is canonized, the rosary will be a third-class relic, having been touched by Blessed Solanus.

The rosary is special in other ways, as Jim explained. While in basic training, one of Jim’s fellow trainees was having a difficult time going through a training exercise. Their commander told Jim to accompany the trainee through the rigorous exercise. Not happy, especially because he had already completed the routine, Jim urged his comrade on. Instead, the young man stopped and sat in the waist-deep mud. Trying to keep his composure while encouraging the desperate young man, Jim said he recalled the words of Fr. Casey: when facing a challenge, put your faith in God and pray. 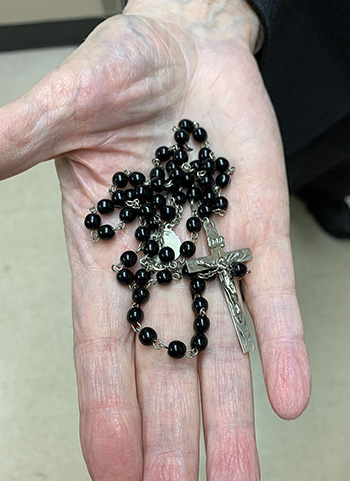 Jim Cotter keeps his black rosary with him everywhere he goes. (Sam Lucero | The Compass)

Jim said a prayer to God asking for strength, for him and for his fellow soldier. Almost immediately, the young man stood up and continued the training exercise.

Afterward, Jim sat with the other man and asked what made him finally stand up and complete the exercise. The man, also a Catholic, said he had felt something in the mud below his hand and raised it to the surface. It was a rosary. He understood it as a sign and it motivated him to stand up and finish. Jim said he told the man that he also had a rosary, which he kept with him at all time. He checked his pockets, but could not find his rosary — even though other items he had were still in his pockets.

Jim asked the man to show him the rosary and, to his surprise, it was Jim’s black beads. He is still not sure how his rosary slipped out of his pocket and ended up below the other soldier’s hand. After promising to buy the young man a rosary, Jim got his beads back.

He carries the rosary with him everywhere he goes — some 50 years after receiving it from his mother and having it blessed by Blessed Solanus Casey.

You are invited to ‘Pause, Praise and Prayer’

Happy Lent! By the time you are reading this we will be a couple of weeks into Lent. I hope and pray that this time of reflection … Read More