The Jordan River flows through Old and New Testament stories

This past weekend (Jan. 10, 2021), we celebrated the Baptism of the Lord, an event the Gospel of John tells us took place at the River Jordan. Not only in Jesus’ life, but throughout the Bible, this river appears several times. It is more than a physical body of water, it is a symbolic place that reminds us of freedom, renewal and reaching the Promised Land.

Various Hebrew and Semitic words give us the name of the river, “Jordan,” offering meanings such as “to flow down” or “to descend.” Since the Jordan descends from Mount Hermon in the north to the Dead Sea in the south, taking it from nearly 2,000 feet above sea level to 1,286 feet below sea level, the name seems appropriate. The total length of the Jordan is 124 miles. However, because it meanders along its course, the flow of the river covers nearly 100 miles more than that. 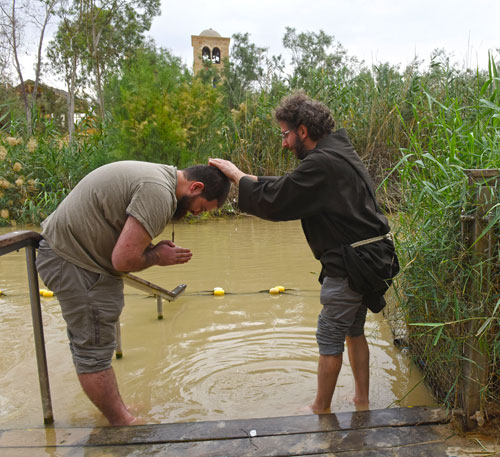 A Franciscan blesses a Christian pilgrim last April 10 at the baptismal site known as Qasr el-Yahud on the Jordan River near the West Bank city of Jericho. (CNS photo | Debbie Hill)

The Jordan River played a crucial role in the Old Testament, since it formed the border that the Israelites crossed to enter the Promised Land, which was then occupied by the Canaanites. At that time, the river was parted for the people to cross on dry land. They were led across by the Ark of the Covenant (Joshua 3:9-17). Today, a site on the West Bank that is under Israeli control is revered as the place where this crossing took place. It is called “Qasr Al-Yahud” and means “Fortress of the Jews.” It is also honored as one of the possible sites of Jesus’ baptism. There is a Franciscan-sponsored church on the site.

Besides the crossing of the Hebrew, at two other times in the Old Testament, the Jordan parted and became a dry path. The first of these was when Elijah the prophet was about to be taken up to heaven. He parted the Jordan by striking it with his rolled-up mantle (2 Kgs 8). When the fiery chariot took Elijah to heaven, his successor, Elisha, witnessed the event. Elisha then picked up Elijah’s mantle — which had fallen from Elijah — and struck the River Jordan and it again parted (2 Kgs 13-14).

The Jordan played a large role in Jesus’ life. As mentioned, he was baptized in its waters by John, and also performed baptisms there himself (Jn 3:26). He and his disciples also traveled along the Jordan — both on his way south to Jerusalem from Galilee, but also to the north from Galilee to the source of the river, near Mount Hermon. (This mountain is sometimes listed as the Mount of the Transfiguration, but most sources consider that site to be Mount Tabor in Galilee.)

Caesarea Philippi is a name the Romans gave to an older settlement  in what is now the Golan Heights between Syria and Lebanon. This place was first called “Banias” (or “Panias”), after the Greek god, Pan.

As it travels the many miles of its course, the Jordan travels through three distinct regions.

From Mount Hermon, the river flows about seven miles into what was called Lake Hulah, today called the Hula Valley. This was once an area that flooded often and was a marshland at other times. In the 1950s, it was drained to control malaria outbreaks that arose from the mosquitoes, and repurposed as an agricultural center in northern Israel.

From the Hula Valley, the Jordan flows out another 10 miles into the Sea of Galilee, or Lake Tiberias. This lake is about 13 miles long. It sits at nearly 700 feet below sea level, lower than the nearby Mediterranean Sea. This lake is the farthest below sea level of any in the world, except for its neighbor, the Dead Sea. The Sea of Galilee, of course, played a large role in Jesus’ active ministry.

From the Sea of Galilee, the Jordan becomes less agricultural in nature and its surrounding terrain more rugged. This only increases as the Jordan Valley moves south from Jerusalem to the Dead Sea. The riverbank has high cliffs and a desert-like climate.

While the distance from the Sea of Galilee to the Dead Sea is only 65 miles, the route the river travels covers 200 miles. South of Galilee, the water of the Jordan also becomes more saline. This is due to thermal springs near Tiberias along the lakeshore, as well as the arid climate. So, when the river water finally reaches the Dead Sea it is very high in salt. The Dead Sea, which has no real outlet and is the lowest body of water on earth, is a harsh environment. Here stand pillars of salt, reminding us of the fate of Lot’s wife (Gn 19:26). However, it is also a spa site, with the mud from the sea believed to have healthy properties that make it popular worldwide.

Flowing from snow in the north to salt and desert in the south, the Jordan River is revered by Christians and Jews, it is also honored by Muslims and Arabs. In Arabic, it is called Al-Shar?ah (“Watering Place”), which reminds us that the Jordan was a gathering site for many cultures and the perfect site for the teachings of Jesus and, later, his first disciples.