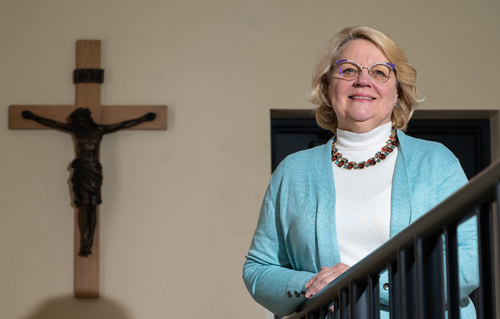 “I feel as though my faith has really been growing and building since I actually retired and had time to ponder,” she said. “It was important for me to go to church when I was working and raising a family, but it was like a second half of life that opened up and gave me an opportunity. I say ‘yes’ to more things now at church than I did before. I have the time. It becomes important to me to give that time. (Fr. Rohr) talks about the second life.”

Dufour, who grew up in Sheboygan, was first introduced to the parish as a student at St. Norbert College. She started a job with a public accounting firm prior to graduation in 1975. In 1978, Dufour’s son, Brian, who now lives in North Carolina, was baptized at Old St. Joseph. Two years later, Dufour began teaching accounting at Northeast Wisconsin Technical College (NWTC) in Green Bay.

“I taught there for 30 years,” she said. “I really enjoyed the teaching aspect. I never thought I would. When I was in college, I told myself, ‘I will never teach.’”

Dufour became involved in parish ministry in the 1990s with the choir.

“It was always kind of a student choir,” she explained. “The students weren’t there for holy days, Christmas and Easter, so they would ask if people would be interested in coming in. I sang for a couple holy days and was asked, ‘Why don’t you just stay in the choir?’”

Prior to retirement, Dufour also served on the parish council. She utilized her accounting skills and experience as a member of the finance council shortly following her final day at NWTC in 2010.

“Before I retired, the woman who was the office manager (at the parish) came out to NWTC to take an accounting class,” said Dufour, who has two granddaughters. “The Sunday after I retired, we were walking out of church and she said, ‘Now you can join the finance council.’ I was interested in it (before), but they met at 7:30 in the morning. I had 7:30 a.m. classes, so it was something that hadn’t worked out.”

Dufour originally committed to the finance council for five years. When Deacon Kevin DeCleene became pastoral leader in 2016, she renewed her service.

“I’m ending my term in June,” she said. “We have three years (terms). I extended it to a fourth year because I became the trustee treasurer two years ago.”

Among the continuing ministries for Dufour is “Knitting for Peace,” which began in cooperation with Norbertine Fr. Jim Baraniak when he was pastor at Old St. Joseph.

“I always thought it would be a nice gift from the parish, a baby blanket after a baby was baptized, so I asked Fr. Baraniak if we could start the ministry,” said Dufour. “There are a number of women who helped do this.”

Dufour taught herself to knit as a child.

“There was a book at the drugstore. They had Barbie clothes on the cover. There were instructions on how to knit and patterns,” she said. “My aunt gave me some needles and yarn. I just kept at it.”

While some of the knitters in the ministry prefer to make white blankets for baptism, Dufour chooses colors.

“White looks so pretty at baptism, but my thinking is, ‘I want it used. I want babies to throw up on it,’” she said with a laugh. “Many mothers won’t use it if it’s white from baptism. When Brian was baptized, I received a beautiful white blanket and it was put in a drawer. I like colors so the family knows it’s a gift to be used.”

Members of “Knitting for Peace” also make prayer shawls. Knitted hats, mittens, gloves and scarves from the group are donated at Christmas to House of Hope, an emergency shelter in Green Bay.

Dufour looks forward to when the group can gather again to knit. Members currently drop off items. The church choir has not been together during COVID-19, but Dufour has appreciated opportunities to serve as cantor at Masses. She began singing at Immaculate Conception Catholic Elementary School, now Christ Child Academy, in Sheboygan where she was taught by the Sisters of St. Casimir from Chicago.

This summer, a young woman from Uganda, a choir member, began living with Dufour. She graduated from St. Norbert College in May and is working to save money for nursing school.

“I think it’s made a very big difference in my life, with COVID, having somebody in the house,” said Dufour.

“I have met more people than I would have just sitting in the pew,” she added. “I always felt that if it was important for me to join, then I have to be active in it.”