GREEN BAY — Make no mistake, members of the St. Elizabeth Ann Seton Parish Choir long for the day when they can sing together in church again. But, in the meantime, they are happy to use their available resources to create music.

The choir, under the direction of Maria Hinnendael, has performed two songs virtually with two more planned — one for Easter and another for Pentecost. The goal was for the choir to “shine a light during this dark time” of COVID-19, said Hinnendael, who began serving as liturgical music director at St. Elizabeth Ann Seton in May 2020. 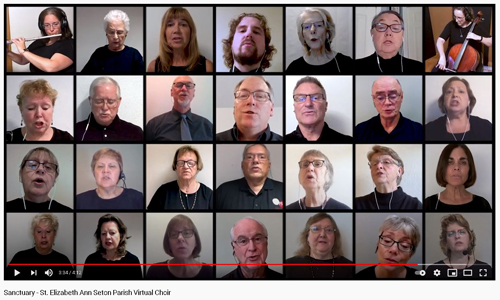 In this screenshot, the St. Elizabeth Ann Seton Parish Choir performs “Sanctuary” virtually. To view the performance, visit hinnendaelstudios.com and click on the YouTube tab at the bottom of the page.

“I wanted our choir to show that music is something that is adaptable and resilient, even in this unprecedented time,” she said. “It’s just kind of a way for us to express our devotion to our faith, to our parish community, that we still want to be creative, we still want to be musical, we still want to strengthen the bonds that we have. This choir is very much like a family.”

Approximately 25 of the more than 50 choir members chose to participate virtually, added Hinnendael. The virtual choir process at the parish requires several steps, including holding virtual rehearsals in sectionals.

“The sopranos will meet with me, the basses, tenors and altos,” she said. “Other than it being virtual, it’s run like a normal sectional. We work on the parts. We discuss the mood of the piece, the text, the musical elements like dynamics, the effect that has on the meaning of the piece. There are a few odd things. As a director, when I’m running these rehearsals, I can’t hear them. They have to mute their microphones in order for this to work.”

Latency issues prevent the vocalists from simply singing together via videoconferencing, so Hinnendael seeks feedback during rehearsals.

“I ask, ‘How did that feel for you? Is there anything you want to work on?’ It’s a lot of asking questions because I can’t actually hear them,” she said. “I also have to be careful not to watch their mouths while I’m conducting during this process because none of them match up.”

“It was new. Some people viewed it as out of their comfort zone,” said Bill Hubbard, who has been a member of the choir at St. Elizabeth Ann Seton for 12 years. “Maria brought us into this gently. She talked about the benefits and what she would like to do. Once she introduced the song, the people who were participating got quite excited about it.

“We worked to learn the music, how she wanted to bring the nuances in the pieces, the dynamics, the breathing and proper techniques that we as choral musicians need to utilize,” he added.

Following the rehearsal process, the vocalists record themselves. Hinnendael works with them to make sure they are centered in the video frame and have a white background. For audio, she reminds them to make sure there are no echoes in the room and that their microphone is not “peaking” (distorting).

“We talked a lot about their recording space, both the video and audio components,” she said. “We needed to make sure their audio was good enough quality to add to the full mix.”

Finding a good recording spot was somewhat difficult for Hubbard due to his background in television broadcast engineering.

“I worked for commercial television stations and for the Public Broadcasting System, so quality audio and visual is really important to me,” he said.

“I had my laptop propped up on a couple boxes so I could stand up,” added Hubbard. “I have better breath control if I’m standing. It was challenging to get the right angle.”

“I give them a few weeks to record on their own,” said Hinnendael. “I made it clear that they also have the option to come in and record with me.

“I made a video with me on one side and the music — notes and text — on the other side,” she added. “It works really well for them to watch me for the cutoffs. They get a lot of confidence knowing they are still being led by a director.”

“Sanctuary,” the first song, is especially meaningful for the choir. In addition to singing it at Mass, it was used as a concluding prayer at rehearsals.

“We all gather around the altar and offer our prayers and intentions,” said Hubbard. “Then we conclude with ‘Sanctuary.’ We sing it twice, the first time in unison and then the second time, what I like to call ‘freelance harmony.’ Each person is free to make up their own part. It’s a delightful sound.”

Jeff Hinnendael, Maria’s husband, mixes and matches the music at his recording studio. Pianist Barb Dix lays down the piano part first. Musicians, including Nicole Binnebose on flute and Jessie Mansky on violin and cello, record over the track at Hinnendael Studios in Green Bay.

“Sanctuary” was introduced at a fall Mass. “What Child is This/Child of the Poor” was played at a Christmas Day Mass. When “Sanctuary” was ready in the studio, Jeff recorded video of his wife listening to it for the first time.

“I sobbed through the entire song,” she said. “I thought, ‘This is what this choir sounds like. I had never heard them sing together. They are so dedicated, so passionate. I was so overwhelmed with emotion.”

The director said she hopes to hear them together in person in May. Hinnendael wants to gather the choir together safely outdoors to sing.

“I think it will be really powerful to be able to do that one time before we break for summer to get people excited about things to come,” she said.

“These are my friends and my choir colleagues,” said Hubbard. “Singing independently to create this music is just not the same, but I’m so glad we are doing it.”

To view the St. Elizabeth Ann Seton virtual choir performances, visit hinnendaelstudios.com and click on the YouTube tab at the bottom of the page.