OSHKOSH — Sr. Frances Meyer celebrated her 96th birthday on Wednesday, Jan. 13. To celebrate, the sisters and staff at SSM Franciscan Courts prepared a surprise “drive-by” caravan of cars to safely offer birthday wishes to Sr. Frances during the pandemic.

The birthday caravan participants decorated their cars and got in formation, then drove through the front parking lot at SSM Franciscan Courts. Approximately 25 to 30 vehicles participated. Seated just inside the entrance foyer to the SSM regional office, Sr. Frances enjoyed watching guests drive by, offering well wishes, smiles and waves, while holding signs and gifts. The staff then held a celebratory luncheon for Sr. Frances, complete with a birthday cake. 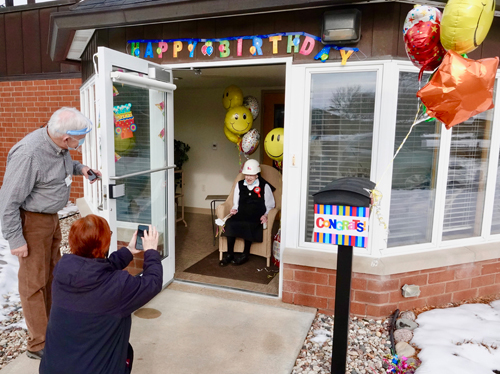 John Fuller, left, director of SSM Franciscan Courts in Oshkosh, holds a door open while Mary Zentner, longtime liturgical music coordinator at Franciscan Courts, takes a photo of Sr. Frances Meyer, a Sister of the Sorrowful Mother, who turned 96 on Jan. 13 and was honored by a drive-by birthday caravan of cars. (Michael Cooney | For The Compass)

Sr. Frances Meyer was born on Jan. 13, 1925, in Eibach, Germany. She was only 2 pounds when she was born, and her twin brother weighed 8 pounds. She was not expected to survive, but her mother fed her goat’s milk and kept her in the oven to keep her warm. According to Sr. Frances, Eibach was a village with only eight houses. Out of this small village, eight young women became Sisters of the Sorrowful Mother (SSM).

Following the war, she left home in 1948 to join the Sisters of the Sorrowful Mother and was invested on Aug. 12, 1949, at the convent in Abenberg. She came to America with five other sisters and made her final profession in Milwaukee on Aug. 12, 1951.

Sr. Frances taught first grade for more than 30 years. When the Sisters of the Sorrowful Mother relocated the Milwaukee Motherhouse to Oshkosh in 2007, Sr. Frances helped with the packing and move, She was the coordinator for the community’s  infirmary and worked to take care for the sisters’ daily needs for the next 20-plus years.

After retirement, Sr. Frances began a new ministry, making quilts for the poor and homeless. She has made and donated hundreds of quilts, and uses her sewing skills to make hats, mittens, scarves, booties and other items to sell at the SSM’s annual craft sale to raise money for SSM missions.

You are invited to ‘Pause, Praise and Prayer’

Happy Lent! By the time you are reading this we will be a couple of weeks into Lent. I hope and pray that this time of reflection … Read More