ALLOUEZ — The Compass will sponsor a 12-day pilgrimage to Greece next October. Some of the trip’s highlights include a four-day ship cruise and visits to some of the places visited by St. Paul.

Fr. Luke Ferris, vicar for clergy and pastoral leaders for the Diocese of Green Bay, will lead the pilgrimage. Pilgrims will depart from Green Bay by bus for Chicago on Wednesday, Oct. 13, and return on Sunday, Oct. 24. 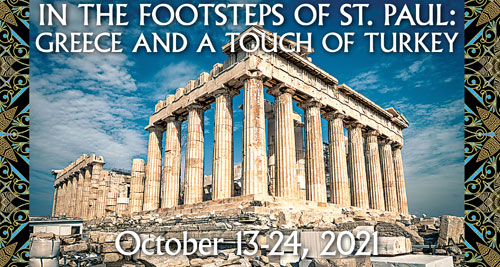 “I’ve always been intrigued by the voyages of St. Paul and the early Christian communities he helped establish. Exploring Greece and Turkey will be faith-filled and fun,” said Fr. Ferris. “Reliving the travels of St. Paul, sharing the lives of the first Christians and visiting the last home of Mary, are a wonderful way for us to deepen our faith.”

Oct. 14: Arrive in Thessaloniki, Greece, home of the Thessalonians, to whom St. Paul wrote two epistles. After hotel check-in and a welcome snack, pilgrims will retire for the first of a two-night stay.

Oct. 15: Start the day with a visit to Philippi, where St. Paul delivered his first sermon in Europe (read Acts 16:12-18). It was here that St. Paul baptized Lydia, believed to be the first Christian convert in Europe. Pilgrims then make a trip to the port city of Kavala, followed by Mass and return to Thessaloniki for dinner and rest.

Oct. 16: Begin the day with Mass at the cathedral in Thessaloniki, followed by a tour of historic sites, before departing for Kalambaka. Check-in at hotel and enjoy dinner.

Oct. 17: Begin with Sunday Mass, followed by breakfast and check-out. The first stop will be to the Monasteries of Meteora, perched on top of huge rocks, followed by departure for Athens, capital of Greece. On the way to Athens, enjoy a brief stop in Delphi, famous for temple ruins to the Greek god Apollo. Upon arrival in Athens, check-in for overnight stay and dinner.

Oct. 18: The group embarks on a four-day ship cruise, with the first port of call to the Island of Mykonos. Pilgrims can relax on the ship or take part in a private and casual walking tour through the narrow pedestrian streets of the town. Mass will be celebrated at Our Lady of the Rosary Church, the only Catholic church in Mykonos. We will then return to the ship for dinner and a pleasant evening on board.

Oct. 19: Pilgrims will arrive at the Turkish port of Kusadasi for a motorcoach ride to Mt. Koressos, where the group will visit the house in nearby Ephesus that tradition says the Blessed Virgin Mary lived. St. John the Evangelist reportedly brought the Blessed Mother here during an apostolic journey. Mass will be celebrated in Mt. Koressos, followed by a visit to Ephesus, location of the Council of Ephesus. It is also where St. Paul preached to the Ephesians. Upon returning to the ship, pilgrims depart for the island of Patmos, where they make a brief journey to the village of Chora, home of the Monastery of St. John. A visit to the Grotto of the Apocalypse, reputed to be the place where the Book of Revelations was written, concludes the day.

Oct. 20: The day begins with a visit to the island of Rhodes, named for the native pink hibiscus flowers. Rhodes is home to many medieval fortifications. Pilgrims can enjoy a stay onboard the ship or visit the Acropolis of Lindos and the Citadel of the Knights. Mass will be celebrated at one of the Catholic churches in Rhodes or at the ship’s chapel.

Oct. 21: The ship arrives in Heraklion, Crete, where St. Paul appointed Titus as bishop. The group will make a private and casual walking tour of Heraklion’s center, followed by Mass at St. John the Baptist Church. Free time will allow guests to stroll the streets and shops of Heraklion. Upon return to the ship, guests enjoy an afternoon cruise to the idyllic island of Santorini. A private casual walking tour will be offered to guests before return to the ship and final night of the cruise.

Oct. 22: Pilgrims disembark at Athens and visit the rock of Acropolis to see the ruins of the Parthenon, Erechtheum and Propylaea. Next, visit Mars Hill, where St. Paul spoke to Athenians. A panoramic drive around the city will include views of the House of Parliament on Syntagma Square, the Panathenaic Stadium (home of the first Olympics of the modern era in 1896) and other sites. The sightseeing continues to ancient Corinth, where St. Paul lived for two years. The group returns to Athens for dinner and rest.

Oct. 23: This day is set aside as a day of rest and opportunity to stroll on your own around Athens. The group will travel to the Cathedral Basilica of St. Dionysius the Areopagite, where Sunday Vigil Mass will be celebrated. Following Mass, the group enjoys a farewell dinner and returns to the hotel.

Oct. 24: After breakfast at the hotel, the group checks out and transfers to the Athens Airport to board a plane back to the United States.

Cost for this pilgrimage is $4,750 per person in double occupancy. This includes hotels, inside cruise cabin (upgrades available), tips and most breakfasts and dinners. Single rooms are an additional $850. An optional roundtrip coach bus is available from Green Bay to Chicago’s O’Hare International Airport for an additional $80.

For more details or to receive a brochure with more information, contact Amy Kawula, (920) 272-8212 or [email protected] or download the brochure.