GREEN BAY — “Franciscans have always played a role in my life. My great-grandmother was actually a secular Franciscan,” said Sue Watts, reminiscing about a woman she often saw in prayer. 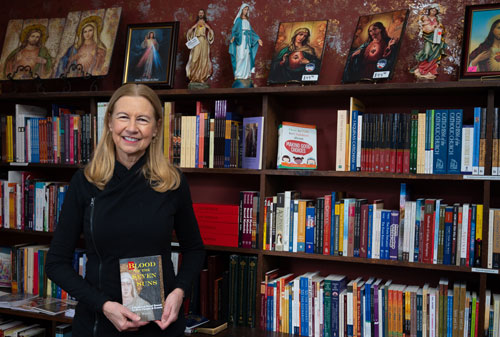 Born in Chicago, when Watts was 9 years old, her family moved to Waukesha. A 1972 journalism graduate from the University of Wisconsin-Madison, she recalled that she actually left her graduation party early to get to Green Bay in time to start her first job out of college, at WBAY-TV.

“I do believe in divine providence,” said Watts. She had lived in Manhattan one summer and, “I always wanted to move back to Chicago or live in New York. … Coming to Green Bay was going to be my stepping stone to move to a bigger market.”

But then she met her husband, Mike Watts, at work. They married in 1974 and, when their daughter was born in 1976, “I decided I would be a stay-at-home mom.” Their son was born in 1978. Watts did freelance writing during that time, and also did a public affairs program on WPNE-TV for four years.

In 1980, she was hired by the Hospital Sisters of St. Francis (HSHS) to work at St. Vincent Hospital.. “I wasn’t really looking for a job,” she said. It was Jim Marshall, who would become a longtime co-worker at HSHS, who had called her. “‘Well, we have a fabulous day care center,’” is how she said he convinced her to go back to work.

Watts would spend over three decades working for HSHS, retiring in 2013 as chief development officer for HSHS Northeast Wisconsin. “When I retired, I was actually working with St. Vincent Hospital, St. Mary and St. Nicholas (in Sheboygan),” she said.

It was at a management team meeting in Springfield, Ill., which is home to the motherhouse of the Hospital Sisters of St. Francis, that the seeds of what would become her passion in retirement were planted.

“I was down at the motherhouse,” Watts said and she saw, in one hallway, “wonderful pictures” depicting the life of St. Francis. “But then there was this beautiful woman, young, and I was like, ‘Who is that?’” she recalled.

She was told the woman was “Brother Jacoba.” That day, she learned “Jacoba supposedly was a very kindly woman … a Roman noble.” Today, more formally in the Catholic Church, Brother Jacoba — as St. Francis called her — is Blessed Jacoba of Settesoli. Her feast day is Feb. 8.

In 2003, Watts learned more about the story of Brother Jacoba when she was on a HSHS-sponsored pilgrimage to Assisi. “It was led by a wonderful Franciscan scholar,” she said, and there Watts learned that she is buried in St. Francis’ crypt.

“When I retired in 2013, I always had it in my mind that I would write this book about Jacoba,” said Watts. For the first three years, she traveled and golfed in her free time. But when health problems cropped up in 2016, Watts turned that into a positive and began researching what became the 354-page book “Blood of the Seven Suns: A Medieval Novel Based on Real People & Events.” It was published in April 2019.

It is available for purchase on her website HGWatts.com which defaults to Amazon, as well as the Barnes & Noble website, and locally at Cathedral Book and Gifts and Lion’s Mouth Bookstore in Green Bay.

The Amazon website explains the book, in part, this way: “Jacoba of the Seven Suns (which refers to where she lived) was a wealthy, beautiful Italian aristocrat living in the tumultuous Middle Ages. In her early teens she joined Rome’s most powerful family after wedding a man nearly twice her age. When he dies prematurely, the young widow takes charge of his palaces and knights as well as raises their children. She also maintains a lifelong relationship with St. Francis — the reformed playboy who avoided women and considered them ‘honeyed poison.’ Why then was Jacoba the only woman he called to his deathbed?”

“I never dreamed I would do historical fiction,” said Watts, who wrote the book under the pen name “H.G. Watts” as a thank you to the influence that the ‘Holy Ghost” had on her project. “Whenever I would experience writer’s block, I would get on my knees and ask the Holy Spirit’s help,” she said.

She and her husband traveled nearly a dozen times to Italy for research on the book.

“I think the whole point of the book for me goes back to, “Thy will be done,’” said Watts. Most historians have St. Francis meeting Brother Jacoba as adults.

“I feel that somehow their lives had intercepted as children,” said Watts. She said she views Brother Jacoba as perhaps the first “secular Franciscan,” remaining in the world to raise her children and care for her family’s property, “all doing it with God’s help.”

Prior to the pandemic, Watts was a lector at St. Bernard Parish. She is also a member of the Equestrian Order of the Holy Sepulchre of Jerusalem. “The idea is to grow in personal holiness while supporting Christians in the Holy Land. It’s commitment of prayer as well as financial help,” she said.

She is also a member of the board of the Cornerstone Foundation of Northeastern Wisconsin Inc. which supports a variety of charitable endeavors.

Health problems continue to challenge Watts. But once again, she looks at the positive. “I feel my faith was strengthened by the medical problems I faced,” she said. “I could actually feel the power of prayer when people were praying for me. I guess that’s all you can hope for, is whatever you do, so it brings you closer to God and closer to other people. That would be my hope for everybody.”

Words to live by: “Thy will be done.”