Even though Christmas is past and the Gospels currently follow the life of the adult Jesus, February is traditionally the month of the Holy Family in the church. While this tradition began in the Roman Catholic Church in the 16th century, in the Coptic Church it is a much older tradition. 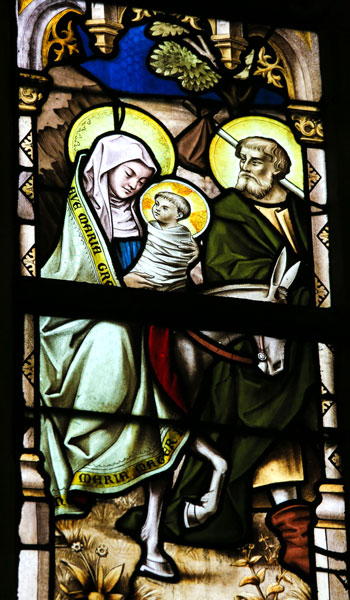 This stained glass window in St. Gummarus Church in Lier, Belgium, depicts the Holy Family on their journey to Egypt. (Bigstockphoto.com)

This is because the Coptic Catholic Church is based in Egypt, and that, as we know from the Gospel of Matthew, is where the Holy Family fled when King Herod tried to kill the infant Jesus.

Until the Latin rite church revised the liturgical calendar in 1962, there was a feast day of the Holy Family celebrated on Feb. 17. That feast dated back to the 17th century and was of French and Canadian origin. While the celebration was removed from the official calendar, the feast is experiencing a renewed interest.

While Matthew’s Gospel — the only one that mentions the Flight into Egypt — says nothing about the Holy Family’s time in Egypt, local tradition says they stayed near what is now Cairo, Egypt. The Coptic church traces its roots to first-century Alexandria and claims to have been founded by the Apostle Thomas. One of the oldest Coptic churches in Egypt is called Abu Serga (formally the Church of SS. Sergius and Bacchus), which dates to the fourth century and is located in Cairo. A feast honoring Mary as “Our Lady of the Underground” is celebrated there on Oct. 22 each year. This is because it is believed the Holy Family stayed at the site for a time, near what is now a crypt area. Since the crypt lies near the Nile River, this area would have been in the flood plain of the river.

Traditions about the life of the Holy Family come to us from non-canonical writings, especially the Gospel of Thomas, Pseudo-Matthew and the Infancy Gospel of James. These are considered apocryphal writings, which can mean that a variety of credibility can be given to them. They are not included in the Bible, so no one is required to believe anything from them.

From these stories, we hear various legends, such as that Salome was the midwife and nurse of Jesus, that the Holy Family stopped at various sites between Palestine and Egypt, and that the various fountains, wells and holy trees were associated with these sites. Salome may have been a relative of the Virgin Mary. She is listed in the Gospel of Mark as being both at the crucifixion and at Jesus’ tomb on Easter morning.

The route the Holy Family would have taken is not clear either. Since they were trying to hide from Herod’s forces, they may have taken an obscure route. However, there were generally three main routes to take when traveling between Egypt and the land of Israel. Since it was not safe to travel alone, given the risk of bandits, they probably traveled with others, perhaps in a caravan. Tradition also says that Mary used the Magi’s gifts to fund their journey.

These travel routes could have included the Via Maris (the “Way of the Sea”) that followed the Mediterranean Sea; “the King’s Highway,” which lay east of the Jordan, but traveled down to Egypt; and even the “Ridge Route,” sometimes called the “Way of the Patriarchs.”

However, this last route did not go all the way to Egypt and would have required taking another way into Egypt, probably a link-up to the Via Maris.

Whichever route was used, it would have been a long trek. The Coptic Church celebrates another feast day related to the travels of the Holy Family, this one on June 1. It is called the “Feast of the Entry of the Lord into Egypt.” Its June date shows that the journey would have taken months.

The Holy Family, of course, returned to the Holy Land after the death of Herod. Since his son, Herod Archelaus was ruling in Judea at the time, Matthew’s Gospel tells us Joseph chose to go to Nazareth and not Bethlehem.

Herod Antipas, another son of King Herod the Great, ruled Galilee at the time. Herod Antipas shows up later in the Gospels, as the king who had John the Baptist killed to please another Salome. He was also the King Herod to whom Jesus was sent by Pilate before the crucifixion.