While Jim Cotter has 13 grandchildren and four great-grandchildren, the title comes not from them, but from hundreds of students at St. Mary of the Immaculate Conception School in Greenville. 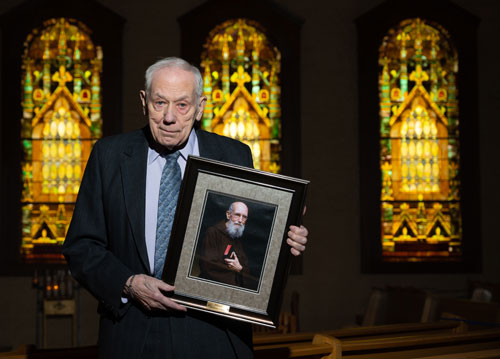 That’s because Cotter, with the help of a couple volunteers and the school kitchen, has made Christmas cookies for the students for the past five or six years. That’s two cookies for each student in the school — about 300 cookies a year.

“He wraps the cookies in individual bags, puts them on a cart and distributes them to all of the students,” said Deb Fuller, principal at St. Mary’s.

“I’ve got it down to a science, and I can do it all with two extra people in three to four hours,” Cotter told The Compass.

He said it all started when he learned that some children were getting teased about Christmas gifts for their parents. Cotter — who used to serve on the board of education for the Greenville parish, where he is a member — decided to make cookies so that the children could enjoy them for themselves, or give them as gifts. He then asked permission to go to each classroom to talk about gift-giving.

“We started talking about giving them away and who they would give them to,” Cotter recalled. “One little guy in third or fourth grade said he would take them home and ‘give one to my mom. She’ll give me a hug.’”

When Cotter asked him, “Why not give her both cookies?” the boy said he would — but save the second one for the next day, so he “would get another hug.”

After his talks to students, Cotter said he knows that “90% of the cookies got home that year.”

Cotter, who serves as sacristan at parish Masses on Saturday evenings, said students who have gone on to high school and college stop to talk with him. “They remember the cookies,” he said.

This year, though, there were no cookies. The pandemic changed plans. Cotter thought about giving up on the students’ Christmas, but then he got another idea.

His brother, the late Capuchin priest, Fr. Pius Cotter, worked with Blessed Solanus Casey in Detroit. Cotter, who attended St. Lawrence Seminary in Mount Calvary for a year, had even met Blessed Solanus. He still remembers their 20-minute visit fondly.

Today, “Blessed Solanus is my go-to guy,” Cotter said, adding that he attended Blessed Solanus’ beatification in Detroit in 2017.

“I pray to Solanus every day and I remember his words: ‘Put your faith in God and follow your instincts.’ You’re not going to go down the wrong path,” Cotter said.

So when he contemplated Christmas 2020, Cotter decided to go to Blessed Solanus. Cotter requested relic badges and prayer cards of Blessed Solanus from the Detroit Capuchins, one for each child at St. Mary’s School. He put them in handwritten Christmas cards with a personal note: nearly 160 cards. He signed each one: “Grandpa Cookie.”

“Anyone who knows Jim knows he is very meticulous about what he does,” Fuller said. “So he made sure that the Christmas card chosen (for each student) was appropriate for the age of the child and then he made sure that each child from the same family received a different card. When he delivered the cards to school, they were bundled according to grades.”

Due to pandemic protocols, Fuller delivered the cards for Cotter, which she enjoyed.

“I took a picture of (Jim) when I made the delivery,” she said, “and the kids all recognized him: ‘Oh yeah, I see him at church all the time!’”

Cotter served as a police officer for 34 years, retiring as police chief in Glendale, Wis. He said that he was always very particular at work. “If I broke my shoelace, it would ruin my day. Then I realized it was not worth it.” Now, his motto is, “Anything that comes your way, do the best you can and put your faith in God.”

While at the seminary, Cotter realized he was not called to the priesthood. He left school to work and soon met his wife, Mary. They were married for 53 years and had seven children. She died in 2010. “Mary was inspirational all the way through,” he said.

“It worked and worked well,” he said of their marriage. “I would not have changed anything — except being more patient.”

“Since she passed,” he added, “I have been donating my extra time to the hospital and the church.” He had even considered the diaconate when he was younger, but waited too long and passed the age limit for entering formation. He said he was disappointed to learn that there was an age limit.

Besides helping at the parish, Cotter volunteered at Ascension St. Elizabeth Hospital in Appleton, did home and hospital visits for the parish and, even now, helps out in the parish office.

On his yet-to-do list is attending the canonization Mass for Blessed Solanus. “If I can walk, talk or be dragged,” he said, “I’m going to Rome.”

A few years ago, Cotter took training to teach advanced care planning. He works with the Fox Valley Advanced Care Planning Partnership, whom, he said, sent him to “weeks and weeks of classes.”

He said advanced planning is important and teaches it for St. Elizabeth’s and has “been loaned out” to other health care groups. He said he is willing to teach classes on it to groups or even individuals.

Cotter loves meeting people. He enjoys seeing them at Mass and looks forward to the time he can return to more face-to-face ministry.

“I’d just as soon be out and about,” he said. “Two or three years ago, I made a New Year’s resolution that, anytime I go out in public, I make sure I smile and have somebody respond to it. … If you can get somebody to smile, you’ve accomplished something. It doesn’t cost you a dime.”

Words to live by: “Put your faith in God and follow your instincts. You’re not going to go down the wrong path.”